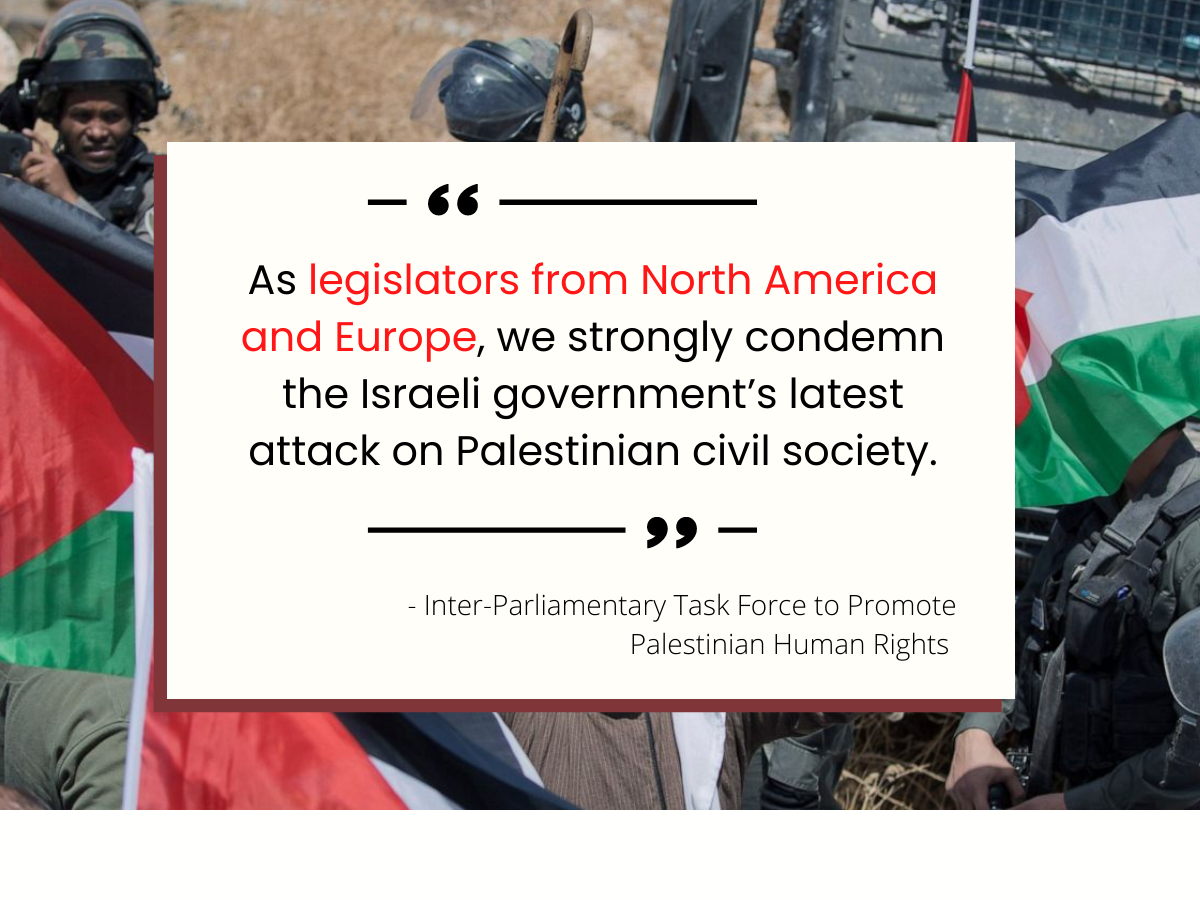 Montreal, November 9, 2021  — Legislators from Europe and North America came together recently to discuss the alarming recent threats to Palestinian civil society by the Israeli government, as well as initiatives that governments can take to ensure that public funding is not contributing to Israeli violations of human rights.

This was the second meeting of the multi-partisan “Inter-Parliamentary Task Force to Promote Palestinian Human Rights,” which is composed of more than 20 legislators from 10 countries, including the US, Canada, the UK, Ireland, Italy, Finland, Belgium and several other European countries. The first meeting took place in May, during the escalation of Israeli violence.

This latest meeting of the Inter-Parliamentary Task Force included a briefing from Defence for Children International – Palestine (DCIP) on how Israel’s recent crackdown against Palestinian civil society organizations (CSOs) will affect their ability to monitor and advocate for human rights. DCIP is one of six leading Palestinian CSOs which were falsely designated by the Israeli government as “terrorist organizations,” sparking wide outrage from Palestinian, Israel, and international human rights organizations. This designation is widely seen as an attempt to shut down Palestinian civil society and international solidarity.

Following the meeting, members of the Task Force released a joint statement condemning the Israeli government’s attack on Palestinian CSOs as an attempt to criminalize Palestinian civil society. The statement urged governments to “use all available means to end Israel’s impunity and hold authorities accountable for their egregious attacks on civil society and human rights defenders.”

“As Palestinian human rights organizations are effectively being criminalized by Israeli authorities, it is critically important for lawmakers around the world to understand the scale and deeply repressive steps taken to silence Palestinian civil society by the Israeli government, so that they can take action,” said Brad Parker of Defence for Children International – Palestine. “It’s time for the international community to finally take action in response to Israel’s intransigence and hold the government accountable for attacks on human rights defenders,” added Fatin Al Tamimi, Chairperson of the Ireland Palestine Solidarity Campaign.

The meeting also featured a discussion with US Representative Betty McCollum about her bill H.R. 2590, the Defending the Human Rights of Palestinian Children and Families Living Under Israeli Military Occupation Act. Task Force members learned that this legislation would stop US taxpayer dollars from contributing to Israeli violations, including: 1) the military detention of Palestinian children; 2) the demolition of Palestinian homes and property; and 3) the further annexation of Palestinian land in violation of international law.

In their joint statement, the lawmakers encouraged the urgent adoption of H.R. 2590 by the United States Congress, and expressed a commitment by legislators to consider ways to adopt similar initiatives in their respective legislatures. As the lawmakers’ statement says, “Concrete measures of accountability are necessary to ensure that no more public money is used to subsidize Israel’s ongoing oppression of Palestinians.”

“Today’s meeting with McCollum was a perfect example of how the Inter-Parliamentary Task Force can provide lawmakers with an opportunity to learn from one another’s initiatives and push the bar on Palestinian human rights,” said Michael Bueckert of Canadians for Justice and Peace in the Middle East. “McCollum’s bill is just one way that the lawmakers can put their principles in action,” added Aneta Jerska of the European Coordination of Committees and Associations for Palestine, “I’m excited for the Task Force to consider a number of other tools in future meetings, including different ways to ban settlement goods and challenge military trade with Israel.”

The Inter-Parliamentary Task Force is supported by civil society groups in Europe and North America. These include Canadians for Justice and Peace in the Middle East (CJPME), the Coalition of Canadian Palestinian Organizations (CCPO), the Ireland Palestine Solidarity Campaign (IPSC), the Palestine Solidarity Campaign (UK), the European Coordination of Committees and Associations for Palestine (ECCP), and Defense for Children International – Palestine (DCIP).

As legislators from North America and Europe, we strongly condemn the Israeli government’s latest attack on Palestinian civil society. On October 19th, Israel designated six important civil society organizations (CSOs) as “terrorist organizations,” a move which is intended to criminalize and eliminate Palestinian advocacy, and to intimidate the international community into cancelling their funding and partnership ties. In addition to the catastrophic effect that this attack is likely to have on the ability of CSOs to continue their critical human rights work, we are also deeply concerned about threats that this poses to the personal rights and safety of their employees and volunteers.

This is a critical moment for the international community. It is imperative that we respond forcefully to Israel’s criminalization of Palestinian civil society. We urge our governments to listen to the demands from Palestinian CSOs, and use all available means to end Israel’s impunity and hold authorities accountable for their egregious attacks on civil society and human rights defenders.

We encourage the urgent adoption of this legislation by the United States, and commit to seeking out ways to adopt these principles in our respective legislatures. Concrete measures of accountability are necessary to ensure that no more public money is used to subsidize Israel’s ongoing oppression of Palestinians.