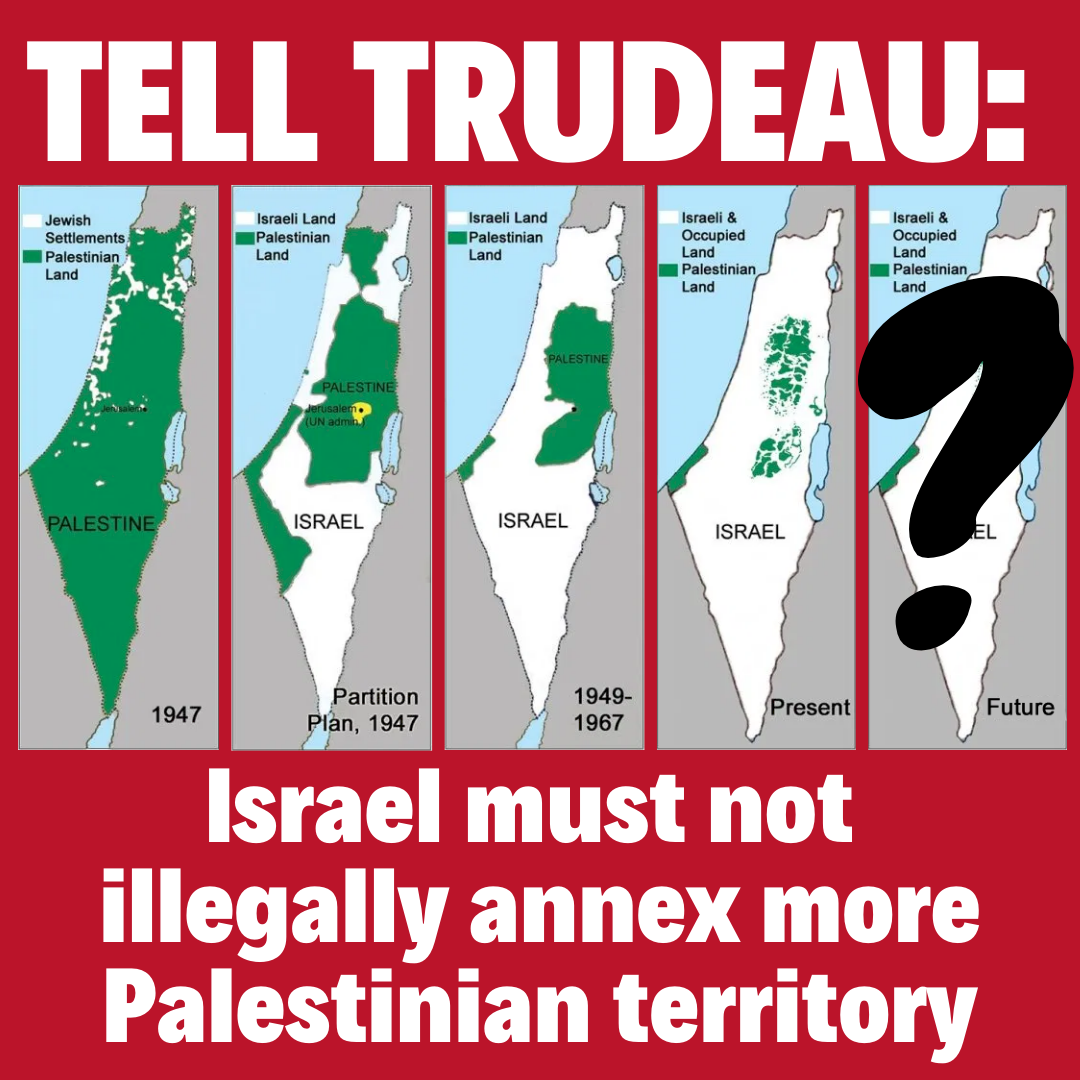 Earlier this week, Israeli politicians announced a plan that could illegally annex large portions of the West Bank (the Jordan Valley and parts of “Area C”) to Israel. This plan, in accordance with Trump’s “Deal of the Century” could be implemented as early as July 10. In a despicable move, the new Israeli government has used the distraction of the worldwide Coronavirus pandemic to proceed with this unilateral and illegal plan.

USE THE FIELDS BELOW TO TELL THE TRUDEAU GOVERNMENT TO VOCALLY OPPOSE ISRAEL'S UNLAWFUL PLANS.

Israeli Prime Minister Benjamin Netanyahu and his rival, Blue and White leader Benny Gantz, struck a deal earlier this week to annex parts of the West Bank as part of their bid to form a unity government.

Gantz and Netanyahu, until recently political rivals who faced off in Israel's March 2 election, agreed that Netanyahu would be able to bring a proposal for annexing parts of the West Bank to a cabinet vote this summer, but supposedly only if the United States backs the move and if it is done in coordination with other international players.

When Trump released his Plan in January, he gave the green light to Israel to move forward with unilaterally annexing more Palestinian land, a move considered to be illegal by the international community. The Trump Plan also suggested that Israel could move forward unilaterally, whether or not the Palestinians have signed on to the Plan.

In Canada’s response to Trump’s Plan, the Trudeau government stated, “Canada has long maintained that peace can only be achieved through direct negotiations between the parties.” (italics added) If Israel moves forward on its annexation plans with the US’ support, Trudeau’s reaction will be very significant.

With the entire globe focused on fighting the coronavirus pandemic, the political agreement in Israel seems like a strategy by Netanyahu to advance his illegal right-wing agenda, under the guise of addressing the COVID-19 crisis.

With the COVID-19 outbreak, Israel will face much less resistance to its plans in the form of protests and grassroots activism. Under the COVID-19 emergency measures, Israeli and Palestinian activists are prevented from coming together to protest or protect their communities.

If the annexation goes ahead, building homes in illegal Israeli settlements will be just as easy as building a new development in a place like Tel Aviv or Haifa. Instead of having to navigate through the military apparatus, and get Knesset and military approval before any new construction, settlements will soon be able to get a simple municipal approval in order to build more homes and take more Palestinian land.