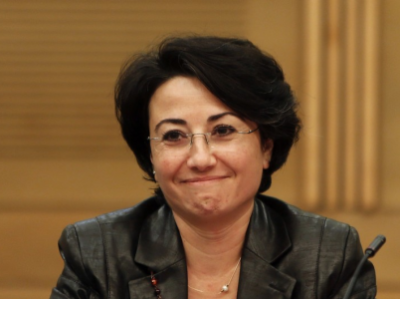 Please join us for CJPME’s third annual fundraising dinner, where we will have the honour of hearing from Ms. Haneen Zoabi, the first Palestinian-Israeli woman to be elected to the Israeli parliament (Knesset): a key Palestinian leader in justice for this generation.

Haneen Zoabi (41) is the first Palestinian woman in Israel elected to the Israeli parliament (Knesset) as member of an Arab party. Elected in the February 2009 elections, she is an articulate defender of the rights of Palestinians in both Israel and the Occupied Territories, as well as a proponent of a fully democratic Israel, free of laws and practices discriminating against its indigenous Arab population. In an act of solidarity with fellow Palestinians in Gaza, she was on the Gaza Aid Flotilla when Israeli forces raided it in international waters and killed nine civilians on May 31.

Ms. Zoabi will speak about her challenges as an elected Palestinian leader in Israel, and the challenges that she and her people face in Israel. Her talk at the Gala will also focus on her experiences aboard the Gaza Aid Flotilla and its aftermath, and about the elements needed for a resolution of the Israeli-Palestinian conflict.

Born in Nazareth in northern Israel in 1969, she holds an M.A. in Communications and Media from Hebrew University, Jerusalem. In 2003 she co-founded the I’lam Centre for Arab Palestinians in Israel—an NGO dedicated to the “democratization of media policies, media practices, and the media landscape in Israel”—and was its first executive director.

On Zoabi’s return to the Knesset following the Gaza Aid Flotilla attack, she was the target of racist and sexist remarks and physical threats by various MKs. She received over 100 death threats in the first two weeks following the raid. The Knesset voted 34-16 to strip her of three of the privileges normally enjoyed by MKs. Zoabi has withstood these acts of aggression with dignity and courage.