Canada’s arms exports to Israel increased by 33% in 2021, amid Gaza bombing 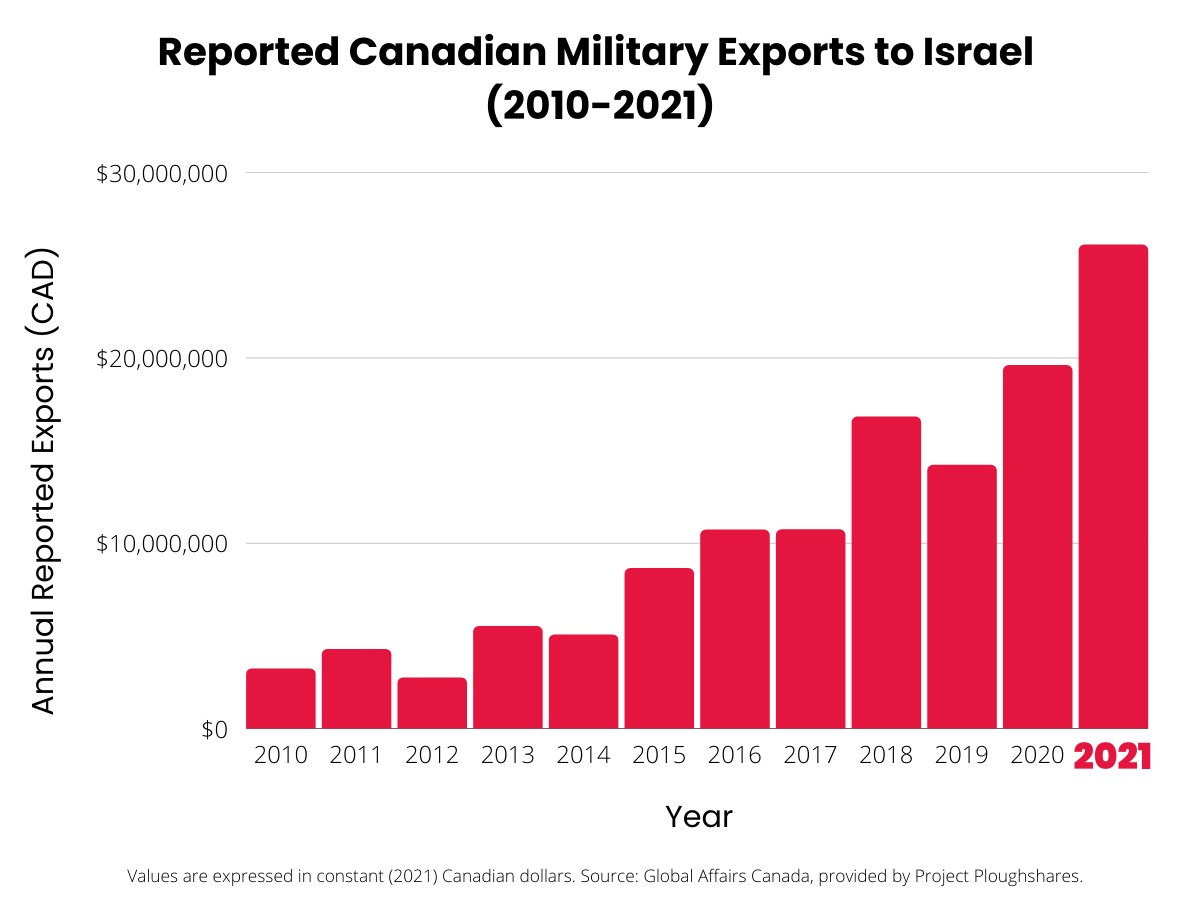 Montreal, May 31, 2022  — Canadians for Justice and Peace in the Middle East (CJPME) is alarmed to learn that Canada’s military exports to Israel increased by 33% in 2021, amid Israel’s 11-day bombing campaign against the occupied Gaza Strip. According to Canada’s newly released annual report on military exports, Canada exported $26,092,288 in military goods to Israel in 2021; up from $19,583,838* in 2020 and approaching the historical high-water mark of $26,893,255* in 1987. This puts Israel in 10th place among Canada’s top twelve non-U.S. destinations for military exports. CJPME calls on Canada to put an immediate halt to this worrying trend by immediately suspending all military trade with Israel.

“It is outrageous that Canada’s arms exports to Israel skyrocketed last year, even as Israeli forces were bombing residential buildings in Gaza, assaulting worshippers at the al-Aqsa mosque, and shooting children in the West Bank,” said Michael Bueckert, Vice President of CJPME. “Canadian weapons manufactures should not be contributing to, nor profiting from, Israel’s brutal assault against the Palestinian people,” Bueckert added.

Canada’s annual report also shows that a significant portion of Canada’s exports continue to be categorized as explosives or related components ($6,135,094), while other exports appear to be related to Israel’s space program ($5,692,553) and military aircraft ($4,302,801). Canada also oversaw a huge increase in exports within a category which may include weapon sights, bombing computers, or target acquisition components ($6,785,954). CJPME notes that this further raises the possibility that Canadian-made weapons or components could have been used in Israel’s military offensives in Gaza, including airstrikes on residential targets which may amount to war crimes.

These new revelations follow the publication of CJPME’s report, titled Arming Apartheid: Canada’s Arms Exports to Israel, which raised concerns about the human rights risk posed by Canada’s accelerating military exports to Israel. In that report, CJPME argued that Israel’s occupation, violence against civilians, and apartheid policies, present a situation of extreme risk in which Canada’s arms exports could be implicated in violations of human rights and international law. The report recommended that Canadian officials take immediate and proactive measures to eliminate the risks associated with its arms exports to Israel, by: 1) suspending all military trade with Israel; and 2) launching a parliamentary study to determine whether past and current Canadian arms exports have been used against civilians in the Occupied Palestinian Territory (OPT) or in airstrikes on Gaza.

*Values indicated with an asterisk (*) are represented in constant (2021) Canadian dollars.