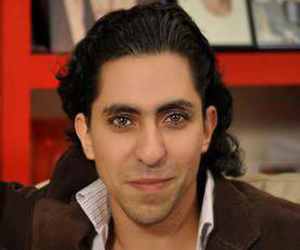 CJPME is pleased to publish the next of a 15 part election series analyzing the positions of Canada’s political parties. CJPME hopes that, by revealing what parties have said and done on key Middle East issues, Canadians will be better informed voters in the upcoming elections. Our next analysis studies each party’s position on the Raif Badawi case, in the context of Canada’s $15 billion arms deal with Saudi Arabia. 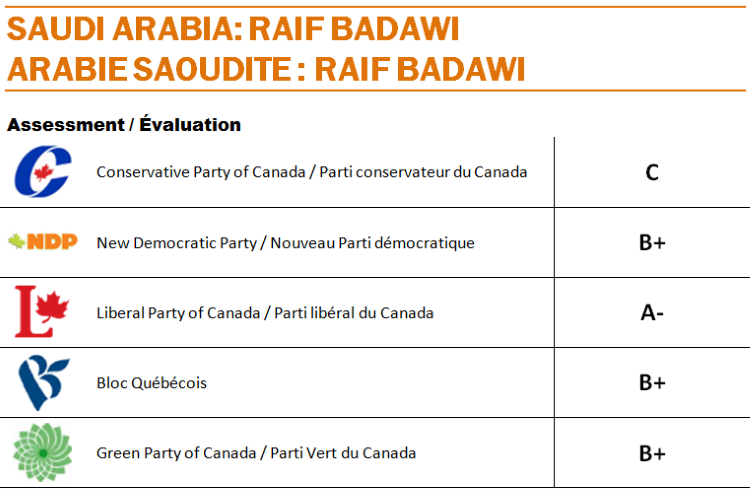 When looking at the Canadian parties’ response to Raif Badawi case, CJPME focused foremost on the parties’ deference to international law.  None of the parties scored especially badly.  While the Conservatives were critical of the sentencing of Badawi, they refrained from making any direct or overt intervention on his behalf.  Given Canada’s $15 billion arms deal with Saudi Arabia, and given that Badawi’s wife is in Canada, CJPME felt that the Conservative government could have done more.  The other parties’ to the Badawi case all had a certain commonality.  Each condemned the charges and sentencing of Badawi, and all of them suggested that Canada should apply leverage on Saudi Arabia based on the existing arms deal.  Nevertheless, CJPME felt that the Badawi case was “low hanging fruit,” and that each of them could have been more creative in their condemnation and response.  In fact, the Liberals did demonstrate some creativity as both Irwin Cotler and Marc Garneau sought to get personally involved.

Raif Badawi is a Saudi blogger and activist who was the creator of the Website “Free Saudi Liberals” which functioned for several years prior to 2012.  In his blogs over several years, Badawi foremost challenged the influence of religious leaders in the Muslim world, and the power such leaders had in societal norms and governance.  Badawi was first detained by the Saudi government in 2008, and although he was detained only briefly, he was subsequently unable to leave the country, and had his bank accounts frozen.[1] His arrest for “apostasy” in 2012 brought much greater international attention to his case, especially after his conviction in 2013 and the subsequent sentence of seven years in prison and 600 lashes.[2]  In 2014, the sentence was increased to 10 years in prison and 1000 lashes.  In January, 2015, he received the first 50 lashes – an incident that was condemned worldwide.  As of July, 2015, the lashes have not continued, apparently out of concerns for Badawi’s health, but there is no clear indication that the sentence has been suspended in any way.

Canada is particularly implicated in Badawi’s case because Badawi’s wife and family obtained political asylum in Canada (Quebec) in 2013. [3]

Badawi’s writings are liberal by Saudi standards, but are quite tame by Western standards.  The type of criticism he levied at the Saudi system were comments like, “Secularism ... is the practical solution to lift countries (including ours) out of the third world and into the first world.” [4]  As a whole, the criticisms expressed through his blog focus more on the religious leaders of Saudi Arabia, and have very little to say about the political leadership of the country.

Given the distressing travesty of justice imposed on Raif Badawi, one would think that Canada would put heavy pressure on Saudi Arabia, or that Canada’s relationship with the Saudi regime would come under review.  Canadian leaders, unfortunately, have not been quick to rethink relations with the Saudis.

Like all Canadian parties, the Conservative government has come out publicly stating that the sentence of Raif Badawi is a violation of human rights. Amy Mills, a spokeswoman for the Foreign Affairs department, stated that the case of the blogger is “a violation of human dignity” and they call “for clemency” in his case.[5] Overall, however, the Harper government acts in a “business as usual” way when it comes to foreign policy with Saudi Arabia. In fact, against all logic in the case of the Saudi regime, former Foreign Affairs Minister John Baird had gone so far as to actually praise human rights and women’s rights progress in Saudi Arabia during his visit to Riyadh in October, 2014.[6]

The former Foreign Affairs Minister John Baird, Development Minister Christian Paradis and the ambassador for religious freedom Andrew Bennett each released statements issuing their condemnation of the conviction of Raif Badawi early in 2015.  During the World Economic Forum in Davos in January 2015, John Baird mentioned the blogger case to the Prince Turki Al Faisal.[7] The Foreign Affairs Minister Rob Nicholson reiterated that they are communicating with the Saudi government and will keep calling for his clemency.[8]  The government’s failure to apply more direct pressure on the Saudi regime, however, inspired a joint call by MP’s from several parties to condemn the silence of the government.[9]

Overall, the Conservative’s verbal support for Badawi loses its potency when the government fails to back its words with actions. Harper spokesman Jason MacDonald excused inaction in the Badawi case saying that it “is a gross violation of human dignity” but “as Mr.Badawi is not a Canadian citizen, we are limited in the actions we may take on his behalf”.[10]  It’s fair to ask if the Conservative would have the same muted reaction if this case happened in Iran or Russia.

The New Democratic party forcefully condemned the violation of human rights and of freedom of expression in the case of the Saudi blogger. According to the leader of the party Thomas Mulcair, Raif Badawi sentence is “a blatant violation of human rights and freedom of expression.”[11] Furthermore, the party compared the actions of the Saudi government to the attack on Charlie Hebdo. The party advocated for the release of Raif Badawi and his immediate reunification with his family in Canada, saying: “it’s the Canadian government’s duty to step forward and condemn these human rights infringements. We need to make absolutely ever effort to guarantee his release […].”[12]

The inaction of the Harper government prompted the NDP to call for a public condemnation of the Foreign Affairs Minister. The NDP also made a link between the Canadian government’s reluctance to criticize the Saudis, and their multi-billion military contract with the Saudi government.  The Foreign Affairs critic Paul Dewar stated “we don’t think when you have a country like Saudi Arabia with its human-rights record that we should be massively increasing arms sales to them.” [13]

The leader of the NDP Thomas Mulcair asserted that the new Conservative bill “Zero Tolerance for Barbaric Cultural Practices Act” encompassed the Saudi practice of public flogging. Concerning the bill, NDP foreign affairs critic Paul Dewar stated, “We find that inconsistent. When it comes to Saudi Arabia, why don’t we hear that same voice?”[14]

The Liberal Party stated that it “strongly condemns this inhumane sentence and urges the Saudi Arabian government to reconsider its stance on Badawi, whose only crime was to peacefully exercise his freedom of speech and his support for freedom of religion.” [15] Like the NDP, the Liberal Party expressed dismay at the muted reaction of the Canadian government. The Liberal Party asked the Foreign Affairs Minister Rob Nicholson “to demand in the most forceful manner that His Majesty King Salman pardon Raif Badawi, and allow him to return to Canada so that he may be reunited with his family.” [16]

Liberal leader Justin Trudeau shared the Amnesty international petition for Badawi’s release on social media. Veteran Liberal lawyer and MP Irwin Cotler reached out to assist the Badawi family legally.  Liberal foreign affairs critic Marc Garneau stated, “Canada has a moral responsibility” toward Raif Badawi and his family even if he is not a Canadian citizen.[17] Moreover, the Liberal Party mentioned that the deal between Canada and Saudi Arabia shouldn’t be an obstacle to speak out.  Garneau requested a meeting with the Saudi Arabia ambassador, but was rebuffed. Nevertheless, Liberals also joined a unanimous motion in the House of Common condemning the Saudi government actions and asking for the immediate release of Raif Badawi.[18]

On his Facebook page Mario Beaulieu urged the Conservative to publicly condemn the Saudi government and to ask for his immediate release.[19] Beaulieu declared that the Conservatives could do more to end the travesty of justice. Furthermore, Beaulieu stated that the $15 billion deal with the Persian Gulf country should be used as leverage to negotiate Badawi’s release.

The Green Party leader Elizabeth May declared “I urge the Saudi Government to immediately end the egregious abuse of human rights against Mr. Raif Badawi and make sure that he receives the appropriate treatment for his injuries”.[20]

May added that she was shocked and appalled by the fact that the same government that convicted Raif Badawi condemned the Charlie Hebdo attack. The Green Party asserted that an economic relationship with Saudi Arabia shouldn’t silence the Canadian government on human rights abuses,[21] adding that the Canadian government should do much more to address the injustice against Badawi.

[20] “Elizabeth May condemns the Use of Torture against Raif Badawi” Green Party of Canada, January 13, 2015, http://www.greenparty.ca/en/media-release/2015-01-13/elizabeth-may-condemns-use-torture-against-raif-badawi accessed July 29, 2015

[21] “Elizabeth May condemns the Use of Torture against Raif Badawi” Green Party of Canada, January 13, 2015, http://www.greenparty.ca/en/media-release/2015-01-13/elizabeth-may-condemns-use-torture-against-raif-badawi accessed July 29, 2015