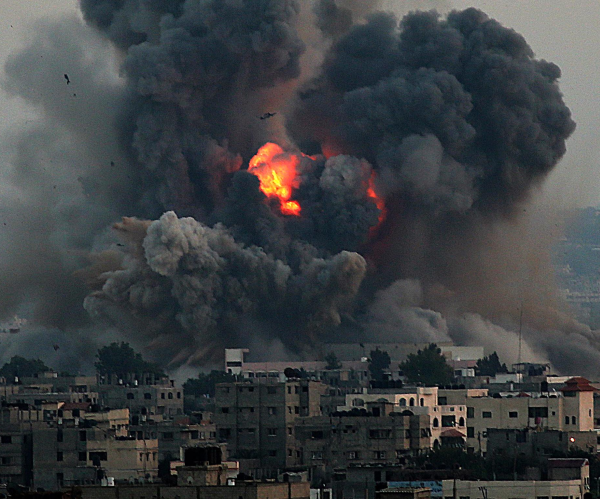 CJPME is pleased to publish the next of a 15 part election series analyzing the positions of Canada’s political parties. CJPME hopes that, by revealing what parties have said and done on key Middle East issues, Canadians will be better informed voters in the upcoming elections. Our next analysis studies each party’s position on the Israeli assault on Gaza in November 2012 and in the summer of 2014. 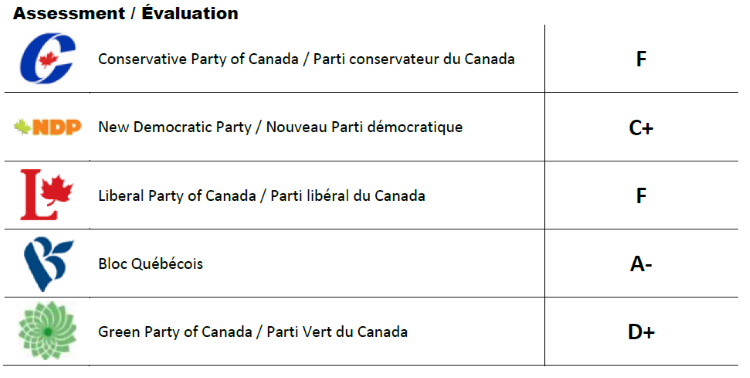 Since the last Canadian elections, there have been two significant flare-ups of violence between Israel and Hamas in Gaza.  The first, called “Operation Pillar of Cloud” by Israel, began in November, 2012, and lasted just over a week.  In this conflict, about 160 Palestinians were killed, and five Israelis were killed.  The second conflict, called “Operation Protective Edge” by Israel began in early July, 2014, and died down in mid-August, 2014.  This second conflict resulted in over 2130 Palestinian deaths, and over 60 Israeli deaths.

The asymmetrical nature of each conflict is astounding.  Palestinian deaths and casualties in each of the above conflicts were well over 30 times those of the Israelis.  The armaments of each side are also vastly uneven: the Israelis use the most advanced American military jets, helicopters and tanks available, with a highly advanced missile defence system and drones.  The Palestinians, on the other hand, rely on primitive, homemade, unguided rockets, and have absolutely no air defence.

The origin of each such conflict is very difficult to pin down, as each side will point to a previous provocation by the other.  While the long-term context is one of “Israel as military occupier of Gaza and the West Bank” each side will trace the origin of each conflict to a specific event: e.g. an airstrike, or a rocket attack of the previous day.  It is therefore highly disingenuous when an outside party – e.g. a Canadian political party – tries to lay the entire blame for a specific incident on one party to the conflict.

Hamas invariably commits war crimes during such conflicts, as their rockets are not sufficiently targetable to distinguish between military and civilian targets.  Israel, on the other hand, does have the technology to distinguish between targets, but also commits similar war crimes as it inexplicably kills large numbers of Palestinian civilians – e.g. 75% of the Palestinians casualties in the summer of 2014.  Of course, because Israel’s arms are so lethal, the mayhem and death is magnitudes larger than that caused by Hamas’ war crimes.  Israel also responds excessively to the insignificant Hamas threat, and Israel’s military action is invariably condemned as illegally “disproportionate” by human rights organizations.[1]

During both the 2012 and 2014 conflicts, the Conservative government never prioritized a principles- or rights-based approach to the conflict.  Instead, in each case the government took a very simplistic position a priori that Israel was simply defending itself against a fanatical and violent Hamas.  With no interest in the broader context, and without human rights law as a sounding board, the Conservative Party became a type of cheerleader for Israel, right or wrong.

Examples of this approach in 2014 include:

The approach taken by the Conservatives in 2014 was sadly similar to their approach in November 2012.  At the beginning of that conflict, Foreign Affairs Minister John Baird stated that Canada “condemns the terrorist group Hamas and stands with Israel as it deals with regional threats to peace and security.”[8]  Through the 2012 conflict, the Harper government consistently aped Israel’s questionable line vis-à-vis the justification and context for the violence. As such, the Harper government consistently disqualified itself from any role as mediator or conciliator in the conflict.

In this vein, perhaps the most disappointing aspect of the Conservative government’s approach to both the 2012 and 2014 conflicts was its failure to push for a negotiated ceasefire. Under the UN Charter, armed conflict between countries should be rapidly mediated to a ceasefire by the UN Security Council. In each case, one sensed that the Conservative government wanted to delay any ceasefire such that Israel might have all the time required to achieve its objectives militarily.  Failure to push for a ceasefire is unethical and legally inexcusable.  Inevitably, the delay of a ceasefire leads to increased loss of life and suffering for the weaker of the two parties in conflict.

During the thick of the 2014 conflict, the NDP issued a very long statement[9] (and a related press release[10]) which provided some reasonably balanced positioning, but also avoided many of the important questions.  To its credit, the statement did call for a ceasefire and avoided laying the blame for the conflict on Hamas.  Also to its credit, the statement insisted that the humanitarian needs of the Palestinian civilian population be respected through the conflict. Ultimately, the NDP statement borrowed a page from historic Liberal Party strategy, and put the emphasis on multi-lateral action via the UN and other international bodies.

On the disappointing side, the statement failed to make any reference to human rights violations: either those of the broader context of the Israeli occupation, or those committed in the context of the current flare-up.  One sensed that the NDP statement sought to remain “neutral” in its statement on the conflict, despite the fact that neutrality in such an asymmetrical conflict is impossible.  With the exception of its call to a “ceasefire,” many left-leaning Canadians saw the NDP statement as being little better than the statements by the Conservatives and Liberals.  This attempt to ignore the realities of the context of the fighting was reinforced by a second statement made by the NDP which focused entirely on a humanitarian initiative proposed by Palestinian-Canadian Dr. Izzeldin Abuelaish.[11]

Finally, several weeks after the conflict, unnoticed by the mainstream media, NDP Foreign Affairs critic Paul Dewar issued a somewhat stronger statement.[12]  Here, the NDP finally addressed some of the broader context to the conflict, and called attention to the flagrant human rights violations committed by Israel, “New Democrats have long been committed to […] an end to Israeli occupation of Palestinian land; and, an end to violence targeting civilians. We will continue our efforts to constructively engage Palestinian and Israeli officials, defend human rights and promote respect for international law.”

While the NDP’s response to the 2014 was less than stellar, their response to the 2012 conflict was even less impressive.  Again, a statement made during the conflict[13] ignores the asymmetrical nature of the conflict, and pretends that the death and mayhem is comparable on each side.  There is no emphasis on Israel’s need to respect the human rights of Palestinians, whether the humanitarian needs during the immediate flare-up, or Palestinian rights in the boarder context.

During operation “Protective Edge” in 2014, the Liberals were highly inconsistent in their various declarations.  On July 8, 2014, Foreign Affairs critic Marc Garneau called for “all parties [to] negotiate a ceasefire without delay.”[14]  Just one week later on July 15, however, party leader Justin Trudeau took a different tack stating that “Israel has the right to defend itself and to protect its people, and the terrorist organization Hamas must immediately halt its rocket attackes.”[15] The Liberal party thus, “hardened its tone vis-à-vis Hamas, which it blamed as having rejected a ceasefire that Egypt managed to negotiate between the Islamic movement and Israel.”[16]  It is worth noting that Hamas had not been invited to the ceasefire negotiations that had taken place between Egypt and Israel at the time.

Party leader Justin Trudeau thus adjusted the discourse of his party, which from that point forward virtually mirrored the position of the Conservative Party during the 2014 conflict.[17]  Worse, in his statement on July 15, Trudeau never re-iterated the emphasis of the Liberal’s previous statement: a statement which had called each party to protect civilians without blaming either party for the conflict.

The 2014 response by the Liberal party was disappointingly similar to its response in November 2012.  At the time, interim Liberal leader Bob Rae stated: “On behalf of the Liberal Party of Canada, I am calling on those exercising control over political and military events in Gaza to halt all rocket attacks against Israel. The terrorist group Hamas must take responsibility for these acts of violence out of Gaza and order them to stop. We recognize Israel’s right to defend its population, and we also urge that parties involved take all possible steps to protect civilian life and work to implement a ceasefire. The Middle East is at a critical and difficult moment, and every possible step must be taken to avoid a wider conflict.”[18]

Like the Conservative government, the Liberal party under Rae made no push for a ceasefire. Although after a ceasefire was reached, Rae did mention the civilian deaths on both sides, he failed to indicate that the Palestinian deaths outnumbered Israeli ones more than 30 to 1, and that the majority of Palestinians killed were civilians.

During the summer of 2014, Bloc Quebecois leader Mario Beaulieu denounced the “unilateral approach of the Canadian government which inflames the conflict” and the disrespect of international law by Israel. [19]  Concerning the conflict overall, the Bloc Quebecois called for a permanent end to the violence and a return to negotiations, in conjunction with an application of UN resolutions enshrining the right of Palestinians to self-determination, and ending Israel’s blockade of Gaza. [20]  According to an interview with Mario Beaulieu, the Bloc Quebecois seeks a negotiated solution “which equally respects the right to self-determination of the Palestinians, along with Israel’s right to exist.” [21]  On Sunday, August 10, the Bloc Quebecois was the most visible political presence at a Montreal demonstration in support of Palestinian human rights in Gaza. [22]

While none of these statements made much news at the time, they each align fairly well with previous Bloc statements concerning issues relating to Israel-Palestine.  Beaulieu’s willingness to emphasize Palestinian self-determination, and Palestinian human rights more broadly is a bit of fresh air in an otherwise stifling Canadian political environment.

The Green Party response to the 2014 conflict was disorganized, somewhat self-contradictory and less than impressive.  In one incident, Green Party President Paul Estrin made a blog post on the party’s Website accusing Hamas of arming Gaza’s children with grenades “and asking their citizens to be sheep to the slaughter.” A few days later, he quit as party president in the backlash.[23]

Several times, the Green Party itself talked of a position of “engaged neutrality” but consistently ignored – like the NDP – the asymmetrical nature of the conflict.  Its milquetoast statement on the conflict on July 11 ignored all context to the conflict, and pretended that there was no difference between the severity and impact of Israeli and Palestinian violence.[24]  Ultimately, Green positions were ambiguous, communicating a certain amount of “hand-wringing” over the losses of both sides, but largely avoiding questions of human rights accountability, with no mention of the urgent need to impose a ceasefire.

The “strongest” sentence in its various statements was by party leader Elizabeth May, stating “I condemn Hamas as a terrorist organization for sending missiles into Israel, but the Israeli retaliation and the invasion of Gaza violates international law and humanitarian norms […]”[25]  May, however, has always been somewhat equivocal on the question of Israel-Palestine, and in other interviews “made clear that the Green party backs Israel and condemns Hamas as a terrorist organization.” [26]

Ultimately, although documented Green positions are quite strong on the question of Israel-Palestine, the Green party was barely better than the Conservatives or Liberals at the time of Israel’s Summer 2014 offensive.  CJPME was unable to find a Green Party statement on the conflict in November, 2012.

[11] “Statement by the Leader of the Official Opposition, Tom Mulcair, on the situation in the Middle East,” New Democratic Party, August 3, 2014, http://www.ndp.ca/news/statement-leader-official-opposition-tom-mulcair-situation-middle-east accessed July 18, 2015

[12] “Statement from the NDP on the announcement of a long-term ceasefire,” New Democratic Party, August 26, 2014, http://www.ndp.ca/news/statement-ndp-announcement-long-term-ceasefire accessed July 18, 2015

[26] Goodman, Lee-Anne, “Controversial ex-president of Green Party should have role in party future, says May,” The Globe and Mail, August 6, 2014, http://www.theglobeandmail.com/news/politics/controversial-ex-president-of-green-party-should-have-role-in-party-future-says-may/article19943062/ accessed July 18, 2015