2015 Election Guide - Palestinian Accession to the ICC and UNESCO 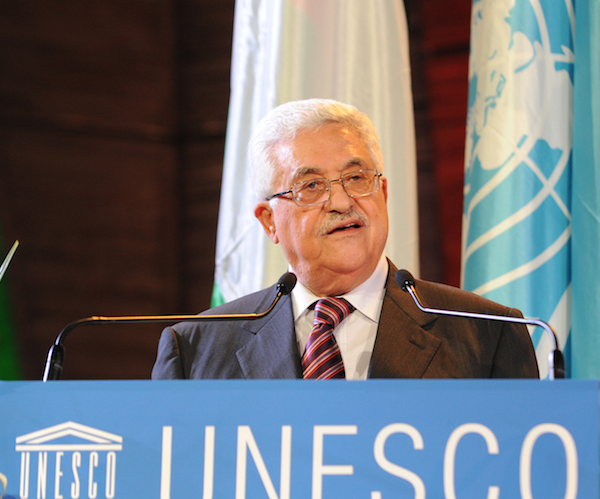 CJPME is pleased to publish the next of a 15 part election series analyzing the positions of Canada’s political parties. CJPME hopes that, by revealing what parties have said and done on key Middle East issues, Canadians will be better informed voters in the upcoming elections. Our next analysis studies each party’s position on the Palestinian accession to UN agencies, namely the International Criminal Court and UNESCO. 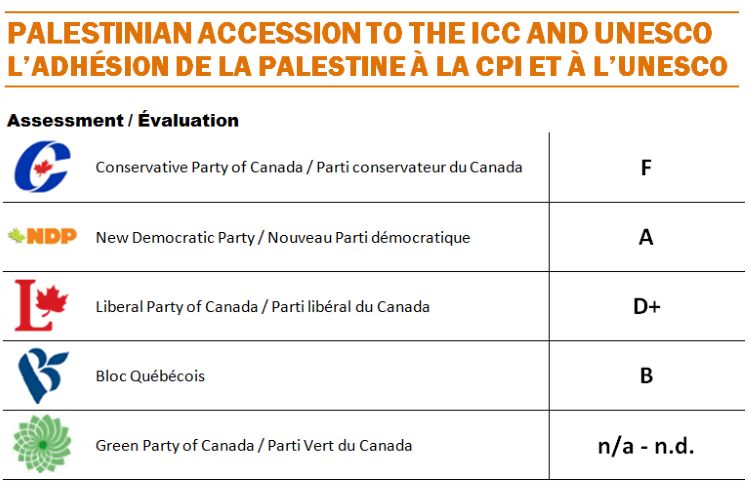 Like with so many Israel-related issues, it is hard to imagine a worse reaction than that put forth by the Conservatives on the question of Palestine at UNESCO and the ICC. Contradicting all norms of multilateralism and diplomacy, the Conservative government fought both initiatives vigorously, and then played the “sore loser” when the UN votes didn’t go in its favour. The NDP responded very responsibly on both questions, asserting Canada’s traditional support for international consensus, and support for international institutions. The NDP also explicitly highlighted the value of Palestinian membership at the ICC. The Liberals, like on so many Israel-related questions, gave a mixed message. While they sought to criticize the Conservative government’s approach, they made clear that they didn’t necessarily disagree with the government’s positions. The Bloc Québécois opposed the Conservative approach to these questions, but didn’t clear articulate a position. The Greens were silent on both items.

Palestine’s new strategy to ‘internationalize’ its conflict with Israel through legal instruments and institutions has generally been met with much hostility from the Canadian government.

Palestine’s stalled efforts to gain recognition as a MemberState of the United Nations prompted it to seek membership in the UN’s specialized agencies. A desire to protect its heritage sites and educational institutions against Israel’s repeated violations of international law - in the Gaza Strip, Bethlehem and Hebron – pushed the Palestinian Authority (PA) to pursue membership with the United Nations Educational, Scientific and Cultural Organization (UNESCO).

On 31 October 2011, UNESCO voted to admit Palestine as a full member of the agency. The organization’s General Conference, its highest ruling body, made the decision by a vote of 107 in favour to 14 against, and 52 abstentions.[1] Among those who were not in favor, both Canada and the United States reprimanded the decision by cutting financial support to UNESCO. [2]  Specifically, Canada cut its voluntary contributions to the agency, refusing to fill in the organization’s financial gaps following the US’ decision to cut its contributions.

Since only states can become members of UNESCO, the decision to add Palestine among its membership essentially recognizes Palestine as a state. This set a precedent that would impact for Palestine’s status with other UN-affiliated organizations.

This happened on December 2014, when Palestine acceded to the International Criminal Court (ICC) under the “observer state” status by signing the Rome Statute. In essence, the PA accepted the Court’s jurisdiction, retroactive to 1 June 2014, before Israel’s assault on Gaza in the summer of 2014.[3] This was done in a bid to launch an investigation of Israeli war crimes in the occupied Palestinian territories. While Palestine’s success was received with warm praise by most of the international community, it was met with indignation by the American, Israeli and Canadian governments.

The Harper government’s approach to these developments reiterated 1) its ongoing reluctance to recognize the Palestinian right to self-determination, and 2) its refusal to stake out a principles- or rights-based foreign policy vis-à-vis Palestine-Israel.

Concerning UNESCO, the official site of the Department of Foreign Affairs, Trade and Development (DFATD) highlights the Conservatives’ ‘disappointment’ with this development, stating that “unilateral Palestinian efforts” are “unhelpful.”[4] Nevertheless, the Conservative government has almost never reacted to ongoing “unilateral” Israeli moves, like the expansion of Israeli “settlements” on Palestinian territory.

To emphasize its unhappiness, Canada’s Conservative government stated that it would not cover any shortfalls in UNESCO’s budget, stating, “those countries that voted in favour of the Palestinian proposal ought to have known the financial implications this would have.”[5]

Though slightly more weak-kneed than the United States, the Conservatives’ decision to withhold contributions not only impedes on UNESCO’s capacities but also undermines the credibility of the organization’s mandate. Indeed, Baird’s unsympathetic comment about ‘financial implications’ highlights a renunciation of Canada’s prominent role in the organization.

The Conservatives maintained this negative stance on international institutions with Palestine’s accession to the ICC. Despite the fact that Israel itself has not signed the Rome Statute, Ottawa holds, as do Washington and Tel Aviv, that Palestine is not a state, and therefore does not qualify for membership in the Court.  This opposition, however, is based on a circular argument, given that the Harper government also actively worked to prevent Palestine’s recognition as a state at the UN, despite an overwhelming international consensus in support.

The Conservative government’s position on Palestine’s accession to the ICC was articulated by Foreign Minister John Baird, who said,

“The decision by the Palestinian Authority to seek to unilaterally accede to the Rome Statute of the International Criminal Court, among other international bodies, is a concerning and dangerous development.”[6]

Why the Conservative Party should disparage Palestine’s adherence to the ICC – let alone qualify it as “dangerous” – is uncertain. Usually, when a country signs or accedes to an international human rights treaty, it is a cause for celebration, as it indicates that country’s willingness to be accountable to human rights.

Again on this issue, the Conservative government held to the Israel-good/Palestine-bad argument.  The Harper government’s position is also somewhat self-contradictory: on the one hand, it asserts vehemently that Israel was not guilty of war crimes, yet on the other hand, it appears fearful that Israel might be found guilty of war crimes if Palestine signed the Rome Statute.

The New Democrats have expressed bewilderment at the government’s negative stance towards Palestine’s status in international institutions like the UN, claiming that Canada’s position has destroyed its credibility in the region and “mars” all the work that has been done to improve relations between Palestine and Israel.[7]

On Palestine’s admission to UNESCO, NDP Deputy Critic for Foreign Affairs Helene Laverdière argued the Tory government had to get out of “the habit of burning bridges” and urged it not to quit Canada's UNESCO membership.[8]

Likewise, the NDP held a favourable position on Palestine’s membership to the ICC, opting to focus on Canada’s promotion of the rule of law. Paul Dewar, the official Opposition Critic for Foreign Affairs, admonished Canada’s objection to Palestinian accession to the ICC, arguing that it undermines the independent actions of a judicial institution. Responding to Foreign Minister Robert Baird’s comment that Palestinians crossed a “red line”, Mr. Dewar stated: “if a red line is actually people going to the International Criminal Court […] we’ve gone a far way from where we started years ago, supporting the institution […]”.[9]

The NDP finds the Conservative stance on these issues puzzling and non-productive. In essence, the New Democrats highlight an irrational Tory stance that challenges Canadian values, such as the rule of law and its support for multilateralism. The NDP holds the viewpoint that Palestine’s accession to these organizations should be praised as a strengthening of international justice, and Canada’s negative stance is destructive.

The Liberal Party’s fickle position on the recognition of Palestine as a member of the international community highlights a major inconsistency in the Liberals’ positions as Party, undermining its credibility.

On Palestine’s accession to UNESCO, the Liberal Party went against the Tory policy. Interim Leader Bob Rae was not in support of Canada cutting its funding to UNESCO after Palestine joined, stating, “the reality is that we're not going to get ourselves into a situation where we're cutting funding every time we get a resolution out of the UN that we don’t like”.[10] Nevertheless, whereas Rae opposed the defunding of UNESCO, the tone of his comments suggests he was far from supporting Palestine’s membership in the international body.

For Palestine’s bid for the ICC, the Liberal position was much more explicit and critical.  Liberal Foreign Affairs Critic Marc Garneau reproached Palestine’s initiative, stating: “[…] it sends a signal which is counter-productive. They are free to apply but I think it is a mistake on their part and will only make the situation worse by entrenching positions”.[11]  Like with the Conservatives, the Liberal position on Palestine’s accession to the ICC seemed arbitrary, with no basis in international law.

The Liberal Party’s ambiguous stance on both these issues may have been an attempt to carve out less polarizing approach to an issue which is emotional for many Canadians. The result, however, is that the Liberals’ message remains muddled concerning the Palestinian question.

The Bloc Quebecois did not directly state a position on Palestine’s accession to UNESCO and the ICC, but simply opted to question the methods of Foreign Minister Robert Baird. Former Deputy André Bellavance stated: “Mr. Baird is doing what a diplomatic chief should not do, which is to take a radical position. There is a need for actual diplomacy”.[12]

The Green Party has not directly addressed this issue on official channels.

[2] It is important to note that while Quebec has its own seat on the organization, it did not vote and has no say in Canada’s contributions to the agency.