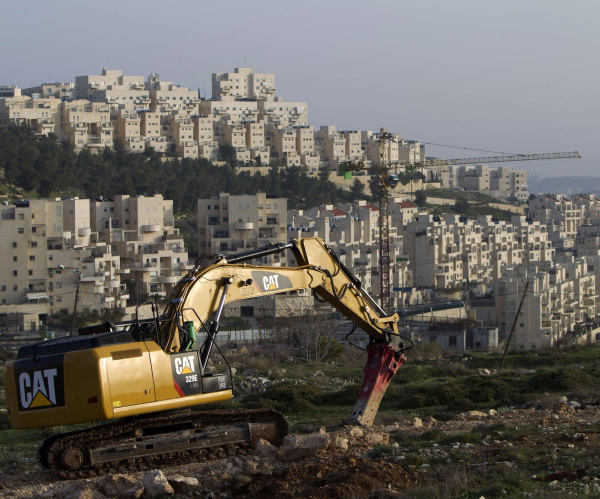 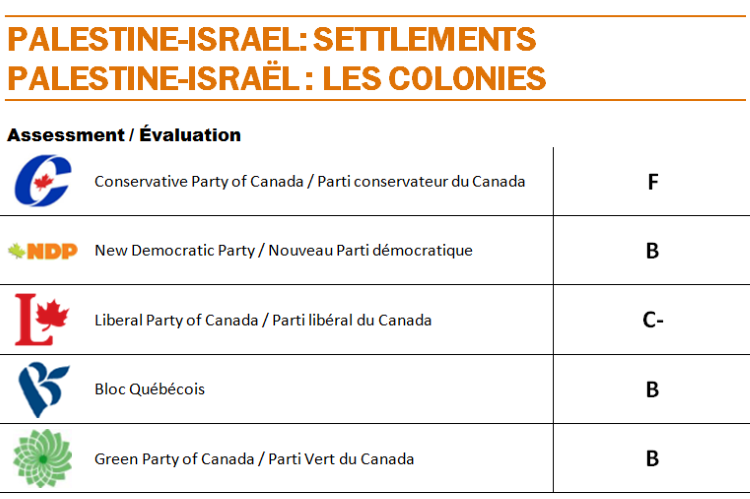 Like on so many Israel-related issues, the Conservatives under Harper have repeatedly failed to condemn Israel’s clear Israeli violations of international law on the issue of “settlements” – hence a failing grade.  For their part, the Liberals have been in stealth mode on the “settlements” question over the past several years, and there is no indication that they would be much better than the Conservatives on this issue if elected.  The NDP has been consistent at multiple levels at pointing out the grave problem that Israeli “settlements” pose to Middle East peace and stability.  However, the NDP tends to be reluctant to raise the issue forcefully.  In a similar way, the Greens have a solid party platform on the question of “settlements” but fail to vocalize their opposition.  The Bloc Québécois, weak as it is, has only addressed the issue indirectly, but properly defers to international law on this and related issues.

There are currently over 120 Israeli colonies,[1] often referred to as “settlements,” and approximately over 100 Israeli outposts[2] together housing well over 500,000 colonizers[3] on occupied Palestinian land (OPT).  They are located on land militarily occupied by Israel since 1967, including the West Bank (including East Jerusalem) and the Golan Heights.   Although the colonies themselves cover under 2 percent of the OPT, Israel has established a web of roads intended for Israeli-only use, military bases, buffer zones around each colony and on either side of the Wall.  Palestinians are barred from all of these, which, together with the colonies themselves, cover at least 40 percent of the West Bank.

Colonies have long been one of the major obstacles to peace between Israel and the Palestinians. The building of colonies on Palestinian land creates “facts on the ground” that make implementation of the two-state solution more logistically and politically complicated. A series of Jewish-only roads connecting the colonies to one another and to Israel proper, and Israeli Military checkpoints effectively slice the OPT into 43 non-contiguous and isolated communities[4] thus making the creation of a Palestinian state virtually impossible.[5]

Given that all Canadian political parties would assert that they support the two-state solution between Israel and the Palestinians, one would think that they would vocally criticize Israel’s ongoing colonization project.  Unfortunately, this is not the case.

The Conservative government has been consistently reluctant to criticize Israel’s expansion of colonies (a.k.a. “settlements”) in the West Bank and East Jerusalem — illegal under international law. For instance, PM and Conservative leader Stephen Harper “refuses to publicly single out Israel for criticism over settlements,” although he did assert that he had raised the issued privately with Israeli PM Netanyahu.[8] Harper argued that public criticism of Israel over colonies would betray a Canadian “ethic” to differences of opinion: “The one lesson I think we have learned is that when somebody is a minority, particularly a small minority in the world, one goes out of one’s way to embrace them, not to single them out for criticism.”[9]

The period since the last Canadian election has been a particularly sensitive one in terms of Israeli colonies on Palestinian land.  With the tense relationship between Obama and Netanyahu and attempts to restart negotiations, every Israeli colony expansion was politically charged.  As such, the Harper government’s extreme reluctance to criticize Israel’s colonial expansion is even more marked.  In one instance, Canadian Press reporter Mike Blanchfield noted, “The Harper government has been criticized for staying virtually silent on the Israeli [colony expansion], beyond a generic statement that unilateral moves by either side were not good for the prospects of peace.”[10]  In fact, in this instance, the government suggested that, because the Palestinians had won greater recognition at the UN, they were to blame for Israel’s colony expansion.  Foreign Affairs Minster John Baird argued, “The PA's action and provocative rhetoric at the United Nations would obviously elicit a response from Israel.”[11]

Historically, the NDP as a party has opposed Israeli colonies in the Palestinian territories, and has included statements to this effect in its party platforms.  In recent years, the NDP party platforms have become more ambiguous on the issue, although individual NDP MPs will assert that this is still the position of the party.  For example, during the ceasefire between Israel and Hamas in Gaza in 2014, NDP MP Andrew Cash averred that the NDP firmly opposed the Israeli colonization of Palestinian territories, stating, “ We have been and will continue to push the government to oppose illegal settlements, which are a serious obstacle to a just and lasting peace.”[12]

NDP leader Thomas Mulcair has been quoted a number of different times concerning his stance vis-à-vis Israel and the Palestinians.  Prior to the last NDP Leadership race, Mulcair was viewed as the most pro-Israel leadership candidate, but he has somewhat tempered his positions since that time – likely as a result of internal party discussions.  Subsequent to the leadership race, Mulcair has gone on record to clarify his position on Israeli colonies, stating, “On the international law side, we know that the current [Israeli government] settlement policies, for example, go against the fourth Geneva Convention […] So that’s something very clear in the NDP position, which has always been my position.”[13]

It is fair to say that the NDP party as a whole opposes Israeli colonies, but it could be much more vocal and forthright in its opposition.

Justin Trudeau and the Liberal Party’s 2015 party platform (“Real Change”)[14] do not touch on foreign policy issues beyond the US and Mexico.  This is in contrast to previous elections where the party was willing to outline positions on the Israel-Palestine conflict.  Overall, in recent years, the overwhelming emphasis of the statements and questions by Liberal leaders, foreign affairs critics and MPs has been on Israeli security concerns. This has continued under Justin Trudeau’s leadership, such that comments – even about Israel’s colonies – are rare and couched in language which prioritizes Israel’s security.  Thus, although Marc Garneau spoke of the need for Israel to stop building colonies in an article in the summer of 2014, it was conditional on Hamas and the Palestinians taking steps to reassure Israel first.[15]

CJPME is skeptical of the conclusions of political analyst Mitch Wolfe, and his claims in his Huffington Post article.  Wolfe suggests that “Trudeau and his Liberals, based on their belief of the illegality of these West Bank settlements, want Israel to stop the expansion of any more settlements […]”[16]  Based on the public record of the current Liberal leadership so far, there is no indication that the Liberals will have the political courage to speak frankly on the question of Israeli colonies.

The 2015 elections platform of the Bloc Québecois[17] fails to mention much in the way of foreign policy, let alone the issue of Israel’s colonies. Traditionally, under the leadership of Gilles Duceppe, the Bloc has been quite progressive on the Israel-Palestine conflict, emphasizing the role that international law must play.  More recently, former party leader Mario Beaulieu stated during a demonstration in support of Palestine that “We have to stop the bloodbath […] We are asking Israel to respect international law.”[18]  While Beaulieu’s comment is not made in reference to Israeli colonies specifically, it again recognizes the primacy of international law in international relations – whether regarding the illegal Israeli colonies, or other issues.

In contrast with the other parties, the Green Party does actually dedicate a subsection of their “Vision Green” [19] to the Israel – Palestine conflict. Specifically on the issue of settlements and settlement expansion, the goal of Green Party MPs is to “Call on Israel to stop expansion and the building of illegal settlements beyond the 1967 borders”. [20]  Furthermore, as reported by various news sources such as the CBC, [21] the Green Party adopted the motion G14-P22 condemning 'illegal' Israeli settlements[22]. As to Green Party Leader Elizabeth May, she backs the motion stating that "I support the existing resolution condemning illegal settlements.” [23]

[2] A number of settlements begin as “ outposts.” Outposts differ from colonies in that, even by Israeli laws, they have been established illegally.  Outposts are often established by a small group of Israeli families commandeering a parcel of land from surrounding Palestinian communities.  Often, outposts are transformed into “settlements” (i.e. colonies) through the collusion of Israeli government officials, and various sympathetic communities both inside Israel and abroad.  Outposts have become an issue during peace negotiations because, even if Israel claims that the number of “settlements” has not grown, the number of outposts has often grown.

[3]Israel’s Central Bureau of Statistics. “Population of Localities with over 2,000 residents and by other geographical divisions – June 2009”. Table 1 – Population by District and Sub-District.