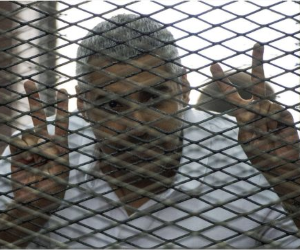 CJPME is pleased to publish the next of a 15 part election series analyzing the positions of Canada’s political parties. CJPME hopes that, by revealing what parties have said and done on key Middle East issues, Canadians will be better informed voters in the upcoming elections. Our next analysis studies each party’s position on the arrest, detention and trials of Al Jazeera journalist Mohamed Fahmy in Egypt.

The Canadian government’s attitude to Mohamed Fahmy’s detention in Egypt for the past 20 months has appeared reluctant and unsympathetic, despite a strong worldwide campaign to free Fahmy and other Aljazeera journalists.  At one point, Foreign Affairs Minister Baird made comments suggesting that Fahmy’s Canadian citizenship was somehow less significant because of his dual Egyptian citizenship.  In response, all the opposition parties joined the #HarperCallEgypt movement, to push Harper to intervene with El-Sisi.  The NDP, for its part, has been very pro-active and creative in its handling of the Fahmy case, often several steps ahead of the government.  The Liberals have also responded very sympathetically, though somewhat less creatively than the NDP: Trudeau, like Mulcair, phoned Fahmy in Egypt.  Elizabeth May and the Greens have also spoken out strongly for Fahmy’s release.

In December of 2013, Egyptian-born Canadian journalist Mohamed Fahmy was working for Aljazeera English when he was arrested and detained in Egypt along with several other Aljazeera journalists.  Along with colleagues, Fahmy was charged with being a member and aiding a terrorist organization (the Egyptian government citing the Muslim Brotherhood), broadcasting false news and reports, and broadcasting without a license. Fahmy awaited trial in jail due to a number of legal delays until June, 2014, when Fahmy was found guilty by an Egyptian court and sentenced to 7 years in prison.[1] In July 2014, the judge provided his reasoning for the sentence, saying that the Al-Jazeera journalists were brought together “by the devil” to destabilize Egypt.[2] Fahmy’s lawyer, Amal Clooney, argued that there was literally no proof in the case against Fahmy.[3]

In January, 2015, an Egyptian court ordered a retrial, but did not release Fahmy on bail.  In February, 2015, hoping to get a pardon under a new law applying to non-Egyptians, Fahmy renounced his Egyptian citizenship. While the Egyptian government did not pardon him, it did allow him bail later that month. As of early August 2015, Fahmy awaits trial in Egypt, after a Cairo court postponed the verdict until August 29th, 2015.[4]

At various points during his incarceration, UN Secretary General Ban Ki-Moon, US President Obama, the president of the EU, and leaders in Canada and Australia each urged Egypt to release Fahmy and the two other Aljazeera journalists. During his 13-month incarceration, Fahmy suffering in freezing and dirty cells, and from a previous shoulder injury and hepatitis C.

When Egyptian authorities arrested Mohamed Fahmy along with two of his colleagues in December 2013, the Harper government not only failed to secure his release,[5] it welcomed the ascendance of Egypt’s el-Sisi government despite its increasingly authoritarian nature and alarming reports of human rights violations. Facing an onslaught of criticism over months of relative silence on the Fahmy’s case, Foreign Affairs Minister John Baird blamed the journalist’s dual Canadian-Egyptian citizenship, claiming it made the matter “somewhat more complicated.”[6]  Some experts disagreed that Fahmy’s dual citizenship should impact Canada’s response.  Toronto immigration and human rights lawyer Lorne Waldman argued, “[dual citizenship] hasn’t prevented Canada in many other cases from intervening and it shouldn’t prevent Canada from expressing its concern in this case.”[7]

In a desperate effort and display of solidarity, Canadians resorted to an online campaign — #HarperCallEgypt — in order to pressure their Prime Minister to urgently lobby for Fahmy’s release.[8] In June 2014, filmmaker John Greyson and Dr. Tarek Loubani, also arrested by Egyptian authorities in 2013 but released after 50 days, called on Conservatives’ foot-dragging response to help their fellow countryman, “Mr. Harper and Mr. Baird must demand Mr. Fahmy’s release loudly and publicly, as they demanded ours.”[9]

Following his release on bail in February 2015, Fahmy has blamed Canada, particularly Harper and Baird, for failing to fight for his freedom.[10] Although Fahmy was issued a new Canadian passport and is awaiting a retrial, many have questioned Harper’s determination to help him.[11]  Fahmy himself accused Harper of not bothering to speak directly with el-Sisi on the case — unlike the Australian Prime Minister, who had successfully intervened with el-Sisi on behalf of one of Fahmy’s Australian Aljazeera colleagues.[12]

The Conservatives’ seemingly lackadaisical efforts to assist a Canadian citizen – in a decidedly re-active fashion, rather than in a pro-active fastion –  during such an ordeal was disappointing.  The fact that Fahmy is still unable to leave Egypt, after his Australian colleague was released months ago, says volumes.

As Fahmy’s case dragged on, the NDP became increasingly vocal against the Conservatives’ foot-dragging to secure Fahmy’s release. The New Democrats started to make more and more urgent demands for Fahmy’s release and return to Canada. The NDP released a series of statements calling for Fahmy’s release, condemning Egyptian authorities and even demanding PM Stephen Harper to help him.[13] [14] [15]

The NDP seemed to approach the case much more proactively than the Conservatives.  In a letter to Harper, NDP Leader Thomas Mulcair made a direct request to ensure that Fahmy would not be stripped of his citizenship after being convicted of terrorism in a Cairo court.[16] Mulcair also publicly joined the #HarperCallEgypt campaign.

In another example of the NDP’s pro-active approach on this case, NDP Foreign Affairs critic Paul Dewar challenged the government to invoke a rarely used ministerial power to issue Fahmy a Canadian passport.[17] Dewar reminded the foreign affairs committee that not only had Fahmy surrendered his Egyptian passport, but also that Egyptian authorities had lost his Canadian passport, a fact that was formally acknowledged in court. Dewar also phoned Fahmy in Cairo to express his support.[18]

While Fahmy’s case no doubt provided a “political” opportunity for all opposition parties, the NDP’s message and concern for Fahmy was strong and consistent.

The Liberal Party has also been outspoken against the Harper government’s sluggishness in working to secure Fahmy’s release. Marc Garneau, Liberal Foreign Affairs critic, condemned the Egyptian court verdict and called on the Canadian government to “intervene directly with the highest levels of Egyptian government to ensure his release.”[19] In early 2015, Liberal Party Leader Justin Trudeau — on behalf of journalist Mohamed Fahmy — appealed to PM Stephen Harper to use his influence to help bring Fahmy home.[20] Trudeau phoned Fahmy in Cairo to express his support,[21] and also joined the #HarperCallEgypt campaign, asking Harper in the House of Commons to call al-Sisi personally and urging him to get involved in the case.[22]

While Fahmy’s case no doubt provided a “political” opportunity for all opposition parties, the Liberals response to the case was strong and consistent.

CJPME could find no statement issued by the Bloc Quebecois regarding Fahmy’s release.

The Green Party of Canada issued a series of statements condemning Harper’s silence “as world leaders speak out on behalf of jailed Canadian journalist Mohamed Fahmy.”[23] Greens also demanded Fahmy’s immediate release. Elizabeth May, Green Party Leader, confronted Harper’s inactions, “It is the Prime Minister’s foremost responsibility to protect Canadian citizens, so I ask this question to Stephen Harper: Why have you refused to do so?”[24]

While Fahmy’s case no doubt provided a “political” opportunity for all opposition parties, the Greens’ response was no less consistent than that of the NDP and Liberals.