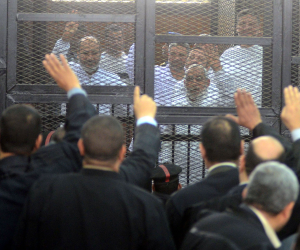 CJPME is pleased to publish the next of a 15 part election series analyzing the positions of Canada’s political parties. CJPME hopes that, by revealing what parties have said and done on key Middle East issues, Canadians will be better informed voters in the upcoming elections. Our next analysis studies each party’s position on the El-Sisi government coup and the mass death sentences that followed. 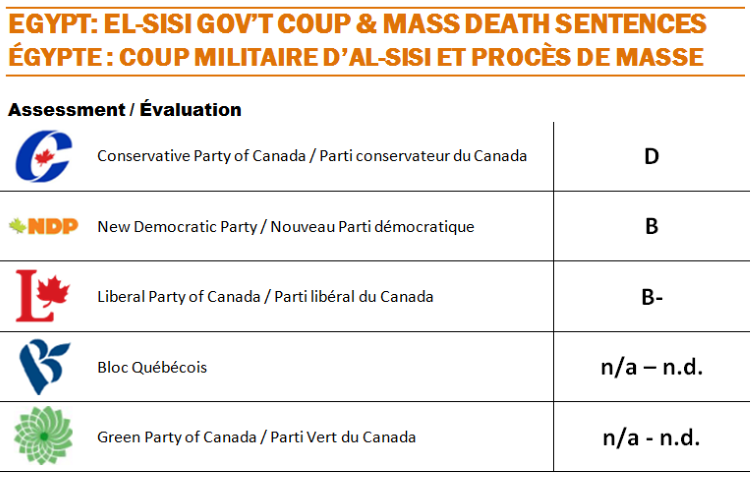 The Canadian political parties’ responses to the 2013 Egyptian military coup[1] were viewed in light of CJPME’s three policy pillars: 1) support for international law; 2) equal expectations of all, and 3) the belief that violence doesn’t lead to solutions.  The Conservatives seemed to place regional “stability” above all else in their response to the coup.  Unfortunately, the “stability” of which they spoke was achieved through violence and bloodshed.  With no mention of international law, and no condemnation of the overthrow of a democratically elected government, the Conservatives score badly.  The NDP and Liberals were much more apt to condemn the government overthrow and the concurrent human rights abuses, but both downplayed the severity of the issues.  While the Greens were vocal on related issues, CJPME could find no statement on the coup or subsequent human rights abuses.  Likewise, CJPME found no response from the Bloc Quebecois.

Near the end of June, 2013, large popular protests started taking place in Egypt calling for the resignation of democratically elected Egyptian President Mohamed Morsi. Morsi had been elected president in 2012 as leader of the “Freedom and Justice” (FJP) party – the political wing of Egypt’s Muslim Brotherhood. The FJP won 37.5% of the popular vote in the first round of elections, and Morsi won 51.7% of the popular vote in the two-candidate presidential run-off.

After a year in office, complaints against Morsi focused on a number of things: a constitutional declaration he had made about 6 months earlier; complaints of intimidation of journalists and demonstrators; as well basic quality-of-life complaints. Nevertheless, presidential elections were more than a year away, and constitutional discussions following the 2011 overthrow of former dictator Hosni Mubarak were far from completed.

On July 3, the Egyptian military – which is not under the authority of the civilian government – arrested Morsi and other leaders, and suspended Egypt’s constitution. The removal from power came after the military gave Morsi’s cabinet an ultimatum to “resolve its differences” with opponents. The arrest of Morsi and his replacement by an interim government triggered a series of military-orchestrated events which led to the installation of General Abdel Fattah el-Sisi as president of Egypt in May, 2014.

As el-Sisi ascended to power in Egypt, human rights organizations documented a massive curtailment of civil rights and freedoms in Egypt. Hundreds of protestors were killed in the months following Morsi’s arrest, while many others were arrested and sentenced – sometimes to death – often in mass trials.[2] [3]  In the immediate aftermath of the coup, Human Rights Watch (HRW) reported that the military repeatedly opened fire on protesters, killing over 1150. [4] As of September 2014, HRW reported that 22,000 Egyptians had been arrested since July 3, 2013, with widening use of torture and incommunicado detention.[5]  In a July, 2015 report, Amnesty International (AI) reported that as many as 41,000 Egyptians (including 3,000 from the leadership of the Muslim Brotherhood) have been arrested, indicted, or sentenced for actions which were nothing more than political dissent.  With respect to the mass convictions and death sentences, AI asserts:[6] “With thousands now detained on copy-cat accusations of ‘protesting without authorization’, taking part in political violence and committing public order offences, mass trials have become a staple of Egypt’s criminal justice system. In practice, such trials have undermined the right to a fair and public hearing by a competent, independent and impartial tribunal – with courts handing down verdicts based on little to no evidence.”[7]

General el-Sisi “won” evidently fraudulent[8] May 2014 presidential elections, after warning “There will be nothing called the Muslim Brotherhood during my tenure.”[9]

One would have thought that Canadian political leaders would be horrified at the overthrow of Egypt’s first legitimately democratic leader ever. More, one would have thought that Canada’s political leaders would be quick to condemn the shocking killings and human rights abuses perpetrated by the new government against its political opponents. Sadly, many Canadian leaders ignored these outrages, and opted for a “business as usual” approach.

Aside from Israel, the Harper government’s comfortable relationship with el-Sisi’s Egypt has become the quintessential example of Canada’s double standards with regard to foreign policy and human rights, in Middle East in particular.

Following President Hosni Mubarak’s decision to step down, Prime Minister Stephen Harper issued a statement promising that Canada would “continue to encourage and support Egypt’s efforts to promote regional stability and peace, including with Israel as well as continued respect for peace treaties in the Middle East.”[10]  Harper would repeatedly express his concern for “stability” in Egypt and Israel’s southern border. Today, it looks as though the need for stability on the Israel-Egypt border trumps the rights and liberties of Egyptian citizens in Harper’s mind.

While the new Egyptian government earned sharp rebuke from human rights organizations and other international players for its ruthlessness following Morsi’s ouster from power by el-Sisi, Harper described the events as a “return to stability.”[11]  Canadian Foreign Affairs Minister John Baird issued a statement on 30 May 2014 hailing the Egyptian presidential election as “a key step along Egypt’s path to democracy,” and reassuring,

“Canada is committed to supporting Egypt in making a peaceful and meaningful transition to democracy, based on respect for human rights, freedom and the rule of law.”[12]

This remark, however, failed to acknowledge that el-Sisi’s virtual “coronation” followed a coup which had ousted a democratically-elected leader.  Baird comments also failed to address a whole litany of on-going human rights atrocities in Egypt at the time, or the draconian anti-democratic laws being passed. Merely a month earlier, the New York Times’ editorial board had reported that “the military-led government’s ruthless disregard for the law and its contrary political views go far beyond anything that former President Mohamed Morsi was accused of doing when he was deposed by the army in July.”[13]  Confirming what many had long suspected, about a year after the military-led coup, a Human Rights Watch report provided evidence that the Egyptian security forces carried out “systematic and widespread killing” between July and August 2013, claiming at least 1,150 lives and “probably [amounting] to crimes against humanity.”[14]  As such, Baird’s comments about a “peaceful and meaningful transition to democracy, based on respect for human rights” are ludicrous.

Far from being a champion for democracy and human rights in Egypt, the Harper government turned a blind eye to Egypt’s military government’s crimes.  Subsequently, Harper’s conservative government even seemed to step up its political support for el-Sisi, announcing $20 million worth of funding for various programs,[15] and even deploying military police officers to provide assistance, training and logistical support to Egypt’s as part of Operation Calumet.[16]

In a news conference in Ottawa on 14 August 2013, NDP Foreign Affairs critic Paul Dewar noted that the Harper government and others around the world should insist the Egyptian military to cease the crackdown on protests. “Canada must work with international partners and urge the interim government to direct the army to show restraint and comply with international human rights obligations,” Dewar said.[17]  The NDP does not seem to have mentioned the mass killings of demonstrators taking place at the time.

An op-ed by Dewar, published on the Huffington Post in November 2013, explained that: “Since the ousting and detention of former president Mohamed Morsi in July, the situation in Egypt has been extremely precarious, and often disturbingly violent. Human rights groups have expressed serious concern over political violence committed in the wake of the assumption of power by the Egyptian military, and the deterioration of an effective rule of law.”[18]

Dewar continued by criticizing Egyptian authorities for being “unable or unwilling to stop the violence and prosecute its perpetrators,” and concluded by adding: “My New Democrat colleagues and I urge the Egyptian authorities to work in collaboration with civil society and the international community in establishing a roadmap to restore full democracy.”[19]

On 25 March 2014, the NDP issued a statement on the situation in Egypt, in which Dewar claimed to be “shocked by the death sentences passed Monday against 529 people in Minya, Egypt […] New Democrats will continue to oppose the death penalty and call for the respect of democratic principles in Egypt.”[20]

While Dewar’s statements are much more clear-headed and lucid than those made by the Harper government, they are far too restrained.  When literally hundreds of demonstrators have been shot dead in the streets of Egypt, saying the situation is “extremely precarious” is an understatement.  Since the coup of July, 2013, the human rights situation has steadily deteriorated under the hand of el-Sisi.  While other actors in Egypt have also committed atrocities, Dewar and the NDP have been far too reluctant to speak out cogently about the actions and failings of the el-Sisi government.

In August 2013, Liberal Foreign Affairs critic Dominic LeBlanc issued a statement on the eruption of violence in Egypt. “It is urgent that a clear roadmap for the return to democracy be set out and fairly implemented. Dialogue, not confrontation and hostility, is the path to peace and prosperity in Egypt.”[21]

His statement, however, failed to condemn the mass killings taking place at the time. As mentioned above, a Human Rights Watch report concluded the Egyptian security forces carried out “systematic and widespread killing” between July and August 2013, claiming at least 1,150 lives and “probably [amounting] to crimes against humanity.”[22]

In June 2014, when Liberal Foreign Affairs critic Marc Garneau criticized Egyptian president Abdel-Fattah el-Sisi over the handling of Mohamed Fahmy’s case and sentencing, he asked, “Is [el-Sisi] going to be like [former Egyptian president] Hosni Mubarak, or he is going to take the country in a different direction?”[23]

Just like the NDP, Liberals have also been vocal against the arbitrary arrest and detention of Canadian citizens.[24] [25]

The Liberal statements on the Egyptian coup and subsequent human rights abuses are better than the Harper government’s, but are still unimpressive.  Like the NDP, their statements fail to call out the real issues, and get so lost in platitudes (e.g. “Dialogue […] is the path to peace…”) that they become meaningless.

CJPME was unable to find statements from the Bloc regarding the el-Sisi coup, or the subsequent mass crackdowns.

On January 31, 2011, Green Party Leader Elizabeth May became the first Canadian political leader to call for the government to support the movement for democracy in Egypt and urge President Mubarak to resign.[26] The Green Party has since issued a series of statements regarding Egypt: congratulating Egyptians during the Arab Spring (2011),[27] calling for an end of religious persecution in the country (2011),[28] condemning Mohamed Fahmy’s arrest, demanding his release and condemning Harper’s indolent response to secure his freedom (2014-2015).[29] CJPME could not find, however, any Green Party statements regarding the military coup that ousted democratically elected president Mohamed Morsi from power, or any statement condemning the violent crackdown that accompanied el-Sisi’s rise to power.

[2] “According to Plan: The Rab’a Massacre and Mass Killings of Protesters in Egypt,” Human Rights Watch. August 2014.

[4] “According to Plan: The Rab’a Massacre and Mass Killings of Protesters in Egypt," Human Rights Watch. August 2014.

[9] Loveluck, Louisa, “Sisi says Muslim Brotherhood will not exist under his reign,” The Guardian, May 6, 2014.