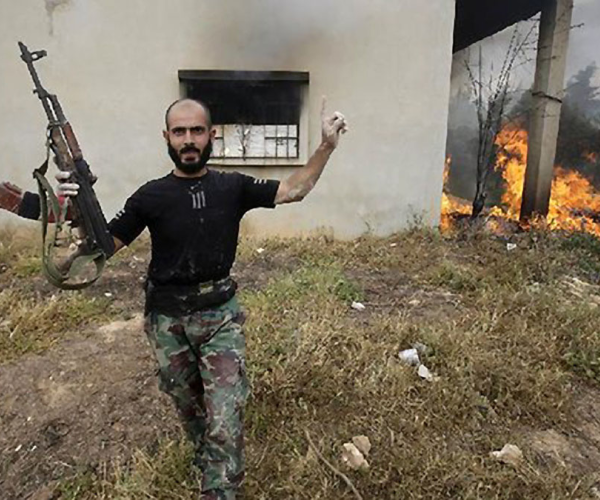 CJPME is pleased to publish the next of a 15 part election series analyzing the positions of Canada’s political parties. CJPME hopes that, by revealing what parties have said and done on key Middle East issues, Canadians will be better informed voters in the upcoming elections. Our next analysis studies each party’s position on the Syrian civil war. 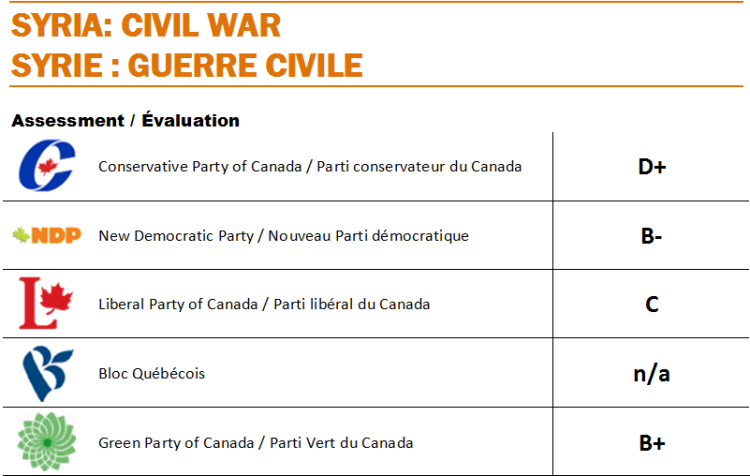 There was no easy path for Canada or the international community on how to approach the Syrian civil war.  In its evaluation, CJPME looked for 1) respect for international law, 2) equal expectations of all, 3) aversion to use of violence, 4) multilateralism, and 5) humanitarian concern.  CJPME concluded that the Conservatives unwisely opted to choose sides, and too quickly abandoned and/or undermined multilateral processes.  The NDP was slightly more trusting in diplomacy, but like the Liberals, did little to elevate the discussion.  The Greens repudiated any armed action: an approach that ultimately turned out to be a wise one.  Like the NDP, the Greens also sought greater investment in UN-sanctioned responses and diplomacy.

Prior to 2011, the Harper government (and previous Liberal governments) had more or less normalized relations with the oppressive government of Syrian President Bashar al-Assad.  The Canadian government encouraged commercial investment in Syria, and largely overlooked the human rights violations committed by the regime.

Beginning in March 2011, protests calling for democratic reform were violently suppressed by the Assad regime. Thousands of civilians were arbitrarily detained, and there were numerous allegations of summary executions and torture.[1] By July, army defectors had loosely organized the Free Syrian Army, which has since been fighting the Assad regime alongside other groups in a protracted 5-year conflict.

In parallel, Canada supported the Western-backed Syrian opposition sending millions to help establish a communications network, although the Harper Canadian government ruled out providing military aid to rebels due to security concerns.[4] Ultimately, the Canadian government provided over $67.2 million in security-related assistance to address the Syrian crisis, most of which went to counterterrorism efforts in Jordan and to stop the use of chemical weapons.[5]

The Canadian government was supportive of the UN Security Council initiative to permit military action against the Assad regime, lamenting Russia and China’s veto against it.[6] The UN attempted peacekeeping efforts until mid-2012, which the Canadian government also supported, but always with the proviso that Assad be excluded from any final solution.[7]  UN peace envoy Kofi Annan abandoned peace negotiations in August, 2012 citing the Syrian government’s refusal to implement his six-point plan, the growing militancy of the Syrian opposition, and the lack of unity with the UN Security Council.

Between 2012 and 2015, the situation in Syria continued to deteriorate, and contributed to the rise of the so called “Islamic State” in Iraq and Syria.  Although ISIS had been active in Syria prior, brutal acts against Westerners in 2014 brought it to prominence for its fundamentalist Islamist ideology and cruel and inhuman treatment of prisoners and civilians.  The Harper government joined a US-led coalition of nations which sought to “degrade” ISIS with airstrikes starting in late 2014.[8] [9]  This step dovetailed from Harper’s outlook in late 2013 when he said, “we are simply not prepared to accept the idea that there is a Russian veto [at the UN Security Council] over all of our actions.”[10]  (See CJPME’s analysis of the Canadian parties’ stance on combating ISIS.)

While human rights organizations have indeed attributed hundreds of war crimes[11] [12] to the Assad government, the government still enjoys strong support among certain Syrian groups – notably the Alawite and Christian minorities.[13]  Human rights organizations have also identified war crimes on the part of opposition groups, though the crimes and atrocities of the Assad regime far outweigh those committed by the opposition groups.[14]

As of early October, 2015, of the country’s pre-war population of 23 million, 16 million Syrians are in need of assistance.[15]  4 million Syrians have fled the country and live as refugees in neighbouring countries; while 7.6 million are internally displaced.[16]  Estimates are that between 200,000 and 300,000 Syrians have died as a result of the conflict.[17]  Overall, Canada has been observer to a vicious multi-year cycle of mass casualties, millions of refugees and displaced persons, growing militant groups, and a haphazard international response.

While it is fair to say that “nobody has a tidy answer” to the Syrian civil war, most Canadian parties demonstrated inconsistent policies and positions prior to, and following the outbreak of civil war in Syria.

Soon after UN peacekeeping efforts failed in 2012, the Tory government determined that Syria was a state sponsor of terrorism,[18] and castigated the Assad regime for its persistent violations of international law.  The following year, Former Foreign Minister John Baird asserted, “Assad has plunged his country into chaos and is ultimately responsible for any use of chemical weapons that occurs on Syrian territory.”[19]  The following year, 2014, Christian Paradis, Minister of International Development stated, “Canada is appalled by the Assad regime’s blatant disregard of international humanitarian law, including its willful denial of assistance to besieged populations and the deliberate targeting of humanitarian workers.”[20]

While none of these announcements is surprising or off-mark, they reflect the government’s delay and/or selectivity in calling out war crimes and human rights abuses.  The regime of Bashar al-Assad, like that of his father Hafez al-Assad, was notorious for abuses against its people, despite the fact that the regime still enjoyed the support of certain domestic groups.  To its shame, the Conservative government (as well as previous Liberal governments) had engaged quite openly with both regimes prior to the outbreak of civil unrest in Syria in 2011.

Three years into the Syrian civil war, in 2014, Conservative leader Stephen Harper came to the inevitable “no-win” conclusion about the war.  During a state visit to Israel, he concluded, “I don’t see how the victory of either of those forces could be in the interests of Canada, or Israel, or anyone else.”[21] Harper also acknowledged the sectarian aspects of the conflict. Such conclusions highlight a discrepancy between the government’s previous support for the rebel opposition and the reality that both sides represent sectarian interests, and consistently violate human rights.

While there are no easy answers to the crisis in Syria, the Conservative government could reasonably be faulted for 1) its pre-war disregard for the oppressiveness of the Assad regime, 2) its rash support for equally suspect armed opposition groups early in the conflict, 3) its implicit undermining of UN peacekeeping efforts by insisting on the exclusion of Assad, and 4) its refusal to respect the multi-lateral processes at the UN.

Up until the Harper Conservative opted to join the US coalition against ISIS, the NDP position had largely mirrored the Conservative government.  The NDP offered symbolic support early for the rebel opposition and broadly condemned the Assad regime.

The New Democrats were critical at first of the Harper government’s reluctance to sever ties with the Assad regime. The NDP urged Canada to cut diplomatic relations with the Syrian government early on, with the NDP’s Foreign Affairs critic Paul Dewar requesting that Canada should pull its ambassador from Damascus in order to send a “strong message.”[22] In late 2011, former NDP Foreign Affairs critic, Helene Laverdière argued that Canada should push harder for a diplomatic solution to apply harsher measures against the Assad regime.[23]

The NDP also admonished the Harper government for exempting Canadian energy giant Suncor from sanctions against the Assad regime.  Suncor at the time continued to run its $1.2-billion facility with ties to a state-run Syrian company. To that end, Interim Foreign Affairs critic Helen Laverdière suggested that Canada should “put our money where our mouth is” and strengthen its sanctions regime.[24] Under pressure, Suncor shut down its operations in Syria in the fall of 2011.

Since these criticisms in the earlier stages of Syria’s civil war, the NDP has been relatively silent about how to approach the situation, falling back on broad statements that promote a political solution and support for Syrians in crisis.

While there are no easy answers to the crisis in Syria, the NDP could reasonably be faulted for its pre-war disregard for the oppressiveness of the Assad regime.

Like the Conservatives and the NDP, the Liberal Party condemned the Assad regime for its human rights violations in the Syrian civil war and has pushed for a political solution through multilateral institutions.

In 2013, Bob Rae pushed hard for an emergency debate in the House of Commons on the question of Syria.   Rae pushed for a consideration of military options at the time, saying, “We would all prefer to have a political solution rather than a military one. But the problem that we have is that if people say there will no military pressure put on Syria … the Syrian regime will say, ‘Okay no problem. There’s no pressure. We don’t need to find a solution.’ And civil war will continue.”[25]

Rae asserted that Canada, as a “middle power,” must more actively hold the Assad regime accountable by considering action through the International Criminal Court. Still focusing exclusively on the Assad regime, he called for the government’s oppression and killing to be brought to an end as soon as possible, even if it meant military intervention.[26]  Echoing Rae’s sentiments, Liberal leader Justin Trudeau declared the regime’s use of chemical weapons in the summer of 2013 to be “unacceptable” and requiring a “significant response.”[27]

While the crisis in Syria is difficult, the Liberal party could reasonably be faulted for 1) its pre-war disregard for the oppressiveness of the Assad regime, 2) its tendency to focus on an armed response to the conflict.

CJPME was unable to find any Bloc Quebecois statement pertaining to the Syrian Civil War.

The Green Party under Elizabeth May has been the most consistent party vis-à-vis the Syrian civil war.  The Green Party has been most unswervingly critical of all parties in Syria: both the Assad regime, as well as the opposition groups.  The Green Party also opposed the use of any military force in Syria, suggesting that misuse of airstrikes in Libya in 2011 under the Responsibility to Protect doctrine (R2P) had forever tainted similar action in the future, especially in Syria.[28] [29]  Advocating diplomacy as the solution, May stated in 2013 that, “Greens believe Canada should be actively urging all nation states to pressure both the Assad Regime and its opponents to enter into a ceasefire and negotiate a settlement.”[30]

In March, 2015, May gave a speech in the House of Commons where she again warned against military action in Syria.  She pointed out the paradox of previous comments by Stephen Harper, whereby he implicitly admitted that bombing ISIS in Syria would ultimately help the Assad regime.  In this speech, she argued that, “The best way and the biggest threat […] to terrorism is not from missiles; it is from a strategy of political inclusion.”[31]

The Green Party election platform aptly sums up Canada’s role as follows: “By departing from insistence on the rule of law in international affairs, we have made a bad situation worse. Our intentions were good, but their execution was lacking in evidence, perspective, and the understanding that decisions cannot be taken in a history-free zone.”[32]

[15] “Quick facts: What you need to know about the Syria crisis,” MercyCorps, Sept. 2, 2015, https://www.mercycorps.org/articles/turkey-iraq-jordan-lebanon-syria/quick-facts-what-you-need-know-about-syria-crisis  accessed Oct. 9, 2015

[29] Basically, May argues that the original mission in Libya was originally positioned as “Responsibility to Protect” (R2P), but that it had shifted ultimately to “regime change.”  May argues that, since Canada used an R2P campaign for regime change, this calls into question any future Canadian argument for R2P action around the world.  May suggests that international leaders will henceforth be sceptical of any R2P action by Canada.