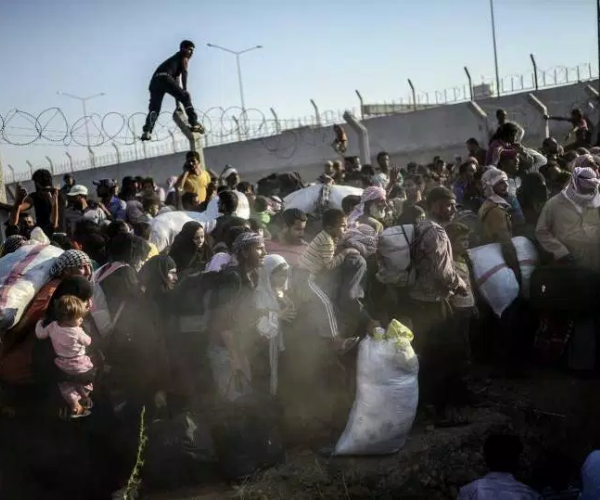 CJPME is pleased to publish the next of a 15 part election series analyzing the positions of Canada’s political parties. CJPME hopes that, by revealing what parties have said and done on key Middle East issues, Canadians will be better informed voters in the upcoming elections. Our next analysis studies each party’s position on the Syrian refugees crisis. 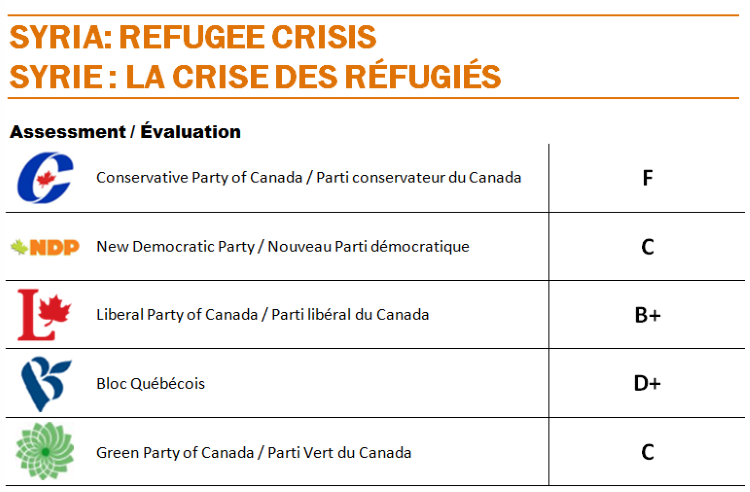 In making its evaluation of political parties’ performance on the Syrian refugee issue, CJPME looked most closely at the parties’ respect for 1) international law, 2) international multi-lateralism, and 3) humanitarian concern.  The Conservative response to the Syrian refugee crisis was parsimonious, evasive and discriminatory: they received a failing grade.  The response of the NDP and Greens wasn’t bad, but they both failed to successfully escalate the issue until after the Aylan Kurdi incident.  The Liberals were more charitable than the other parties toward the Syrian refugees, even prior to the Aylan Kurdi incident.  The Bloc was late to the debate, and reluctant with its proposals.

The outbreak of civil conflict in Syria starting in 2011 has led to what some describe as the worst humanitarian disaster of our time. Approximately one-third of the Syrian population has been uprooted and over 16 million are in need of assistance inside and outside of Syria.[1] Some 7.6 million are internally displaced and another 4 million are refugees in Turkey, Lebanon, Jordan, Iraq and Egypt.[2]

In December 2014, the United Nations issued its largest appeal for the Syrian refugees, estimated at $8.4 billion, which is required to meet the needs of those affected by the crisis.[3] To that end, it had urged the international community to participate in the resettlement of Syrian refugees. In response to this, Canada committed $405.3 million to international assistance and had expanded its commitment to resettle Syrian refugees by accepting 10,000 Syrian [and Iraqi] over three years.[4] Prime Minister Stephen Harper subsequently announced that he would resettle an additional 10,000 refugees from persecuted religious minorities in Iraq and Syria if the Conservatives were re-elected.[5]

When the body 3-year-old Aylan Kurdi – a Kurdish Syrian refugee – washed up on a Turkish beach on Sept. 2, 2015, the world’s attention was riveted on the Syrian refugee crisis for several weeks.  Since this event occurred in the middle of the election campaign, each of Canada’s political parties were put under pressure to provide some response to the crisis.

Even before Aylan Kurdi’s death, Canada’s resettlement program thus had been criticized for its delays in resettling refugees – estimated at only about 2,500 people to date since 2013.[6]  (It is also important to note that 1600 of the approximately 2500 Syrian refugees that were resettled in Canada were privately sponsored,[7] meaning that private groups – not the government – completed the paperwork and paid the costs to bring them.)  Criticism also highlighted Canada’s decision to discriminate among refugees, favouring Christians and other minorities over Muslim Syrian refugees.[8]

The election campaign in September saw all the parties scrambling to position their party as favourably as possible in light of the crisis.  It’s important to note that the response of each of the parties was quite distinct, both before and after the focus that Aylan Kurdi’s death brought.

The Harper Conservatives has been under fire since early in the Syrian conflict for what is perceived to have been a lackluster response to the Syrian refugee crisis. Two years into the Syrian conflict (i.e. in 2013), the Harper government made an initial commitment to accept 1300 Syrian refugees by the end of 2014, of which 1100 would be funded by private sponsors.[9]  (The government later revealed it had only settled 700 by the end of 2014.[10])  The government vehemently rejected claims that their response to the unfolding crisis was inadequate.  Instead, they argued that Canada was one of the largest humanitarian providers to Syrian refugees and escalating refugee resettlement would go against the UN’s recommendations.[11] Nonetheless, the government made it a habit to avoid providing resettlement statistics,[12] and often sought to confuse audiences by mixing in numbers of sponsored Iraqis along with numbers for resettled Syrians.

The delay in processing greater numbers of Syrian refugees has also been an embarrassment for the Harper government.  In addition to earlier complaints of sluggish processing, the Globe and Mail revealed in October, 2015 that the “Prime Minister’s Office directed Canadian immigration officials to stop processing one of the most vulnerable classes of Syrian refugees this spring and declared that all UN-referred refugees would require approval from the Prime Minister […]”[15]  A month earlier, Postmedia News found that the Harper government had failed to spend $350 million over three years of money that had been allocated to refugees and immigration.[16]

With the delays, the unspent funds, the haphazard announcements, and scarcity of information from the government, it is no surprise that many also conclude that the Conservative government has been “playing with the numbers” of landed refugees.[17]

In addition to the numbers issue and the delays, the Tory government has been accused of making immigration more restrictive for refugees. The Conservatives has made changes to the Immigration and Refugee Protection Act, contained in Bill C-31, which has made refugee protection in Canada “dangerously vulnerable to political whims”.[18] For instance, the new system has made it increasingly difficult for rejected asylum seekers from having access to the asylum appeals tribunal.[19]

Following the Aylan Kurdi photo, the Conservative government did not announce plans to accept even more Syrian refugees.  Instead, it placed repeated emphasis on the need to ensure that individuals processed as refugees be carefully screened to ensure they are not terrorists.[20]  It did, however, offer to match private donations of up to $100 million for Syrian humanitarian aid.[21]

Even if it were to meet all its existing targets, the Conservative record on Syrian refugees has been very unimpressive.  Given 1) the government’s slow, underfunded, and discriminatory response to the Syrian refugee crisis, 2) its ongoing lack of transparency, and 3) its tendency to offload the financial burden of refugee sponsorship to private sponsors, the Conservatives score badly in CJPME assessment.

The NDP has frequently criticized the Conservative government’s response to the Syrian refugee crisis. NDP Foreign Affairs Critic Paul Dewar has compared Canada’s limited response to the programs in Sweden and Germany, which have accepted tens of thousands during the same timeframe.[22] The NDP’s critic for Citizenship and Immigration Lysane Blanchette-Lamothe claims that the government is “completely lacking any sense of urgency about this crisis”.[23]

The NDP further pointed out that the Conservatives pledge to accommodate more refugees in January did not clarify how much of the lion’s share will be put on the private sector. MP Andrew Cash stated that the distinction matters, and thus this move proves that the government cannot “follow through”.[24]

Following the Aylan Kurdi photo, the NDP became more explicit in its recommendations, and ultimately committing to admit 10,000 refugees by the end of 2015, and 9,000 every year after that.  The NDP also proposed the creation of a Syrian Refugee Coordinator to oversee government programs, and to identify and eliminate barriers to a speedy processing.[25]

The NDP has been fairly attentive to the Syrian refugee question since early in the Syrian civil war.  However, the NDP can reasonably be faulted for its failure to be more explicit about its own proposals, and its failure to further escalate the issue.  As such, the NDP received an average grade in the CJPME assessment.

The Liberal Party has echoed the NDP in suggesting that Canada should do more to help with the refugee crisis, in Syria and at home. Specifically, it criticised the slow initial implementation of the Conservative plan to sponsor 1,300 refugees. The Liberals’ Citizen and Immigration critic stated that the government should “do more than just pay lip-service and process a small amount of people”.[26] The Liberals also criticized the focus on religious minorities in Canada’s resettlement program. The former Liberal critic for immigration, John McCallum, explained that “cherry-picking” refugees illustrates a government that “[isn’t] actually committed to refugees.”[27]

As early as mid-2013, Liberal leader Justin Trudeau had weighed in on the issue, and demonstrated clear humanitarian leadership.  “I’ve very worried about the Syrian people. […] We also do want to see our government providing humanitarian support, diplomatic pressure to resolve [the Syrian civil war] and I know we can do more around refugees in terms of bringing some of the many thousands of displaced people to Canada for a better life.”[28]

The Liberals also criticized the Conservatives’ changes to the immigration system as a whole. The Liberal Party claims that the Conservatives have been “dragg[ing] their feet” when it comes to Syrian refugees, and have erected unnecessary barriers for both asylum-seekers and aspiring citizens.[29] Even before the Aylan Kurdi photo, the Liberals had pledged to expand the resettlement program to 25,000 Syrian refugees – under directly government sponsorship.[30]  Liberal leader Justin Trudeau stated that the costs associated with this expansion would be added on to the existing budget and resources dedicated to refugees.[31]

After the Aylan Kurdi photo, the Liberals stuck with their prior target of resettling 25,000 government-sponsored Syrian refugees.  It also promised to spend an additional $100-million for refugee processing and settlement.[32]

Of all the major national parties, the Liberals have been the strongest on the Syrian refugee question.  The Liberals were “generous” in their response to the Syrian refugee crisis since long before the Aylan Kurdi affair, and have reflected a greater sensitivity to the broader humanitarian needs of the region.  As such, the Liberals receive an fairly strong grade in the CJPME assessment.

CJPME was unable to find any Bloc Quebecois statement pertaining to Syrian refugees prior to the Aylan Kurdi photo.  However, immediately following the photo, the Bloc called for the immediate acceptance of 10,000 refugees from Syria.  While it was not entirely clear in context, it is probably most accurate to assume that these 10,000 targeted by the Bloc were to be “in addition to” the previous commitments already made by the Harper government.[33]  Overall, however, the Bloc seemed very hesitant to promise much on the Syrian refugee question.[34]

Prior to the Aylan Kurdi photo, the Green Party had joined the chorus of criticism of the Harper government’s response to Syrian refugee crisis.  The Green Party platform stated, “our anemic processing of Syrian refugees is truly shocking.”[35] The Party also called for a “complete overhaul” of the immigration system to meet contemporary needs, and improve “our front-line overseas ability to process refugees.”[36]  Interestingly, Green Party leader Elizabeth May has herself helped to reunite two Syrian families based in her riding.  Because of this experience, she spoke firsthand of the dysfunction of Canada’s Syrian refugee resettlement process.

Following the Aylan Kurdi affair, Elizabeth May proposed a goal of resettling 25,000 Syrian refugees in Canada.[37]

Given the small size of its parliamentary caucus and its limited access to resources and media, CJPME deemed that the Green’s response to the Syrian refugee crisis was reasonably good.

[4] “Canada’s Response to the Situation in Syria.” Canadian Department of Foreign Affairs, Trade and Development. Accessed on 19 August, 2015. http://www.international.gc.ca/international/syria-syrie.aspx?lang=eng

[25] “Platform comparison: Where the parties stand on the top campaign issues,” The Globe and Mail. Oct. 9, 2015, http://www.theglobeandmail.com/news/politics/elections/party-platform-comparison/article26758784/ accessed Oct. 12, 2015

[30] “Justin Trudeau on Extending the Combat Mission in Iraq and Expanding Into Syria,” The Liberal Party of Canada. 1 April, 2015. Accessed on 20 August, 2015. https://www.liberal.ca/speech-justin-trudeau-hoc-2015-on-extending-the-combat-mission-in-iraq-and-expanding-into-syria/

[32] “Platform comparison: Where the parties stand on the top campaign issues,” The Globe and Mail. Oct. 9, 2015, http://www.theglobeandmail.com/news/politics/elections/party-platform-comparison/article26758784/ accessed Oct. 12, 2015