Bill C-51, and why Canadians should care about privacy

CJPME Political Blog, March 11, 2015: Ever since Edward Snowdon leaked classified National Security Agency (NSA) information in the summer of 2013, the issue of privacy has become an increasingly mainstream one. More specifically, people all over the world have begun to heavily question the relationship between their governments, their rights, and their information. 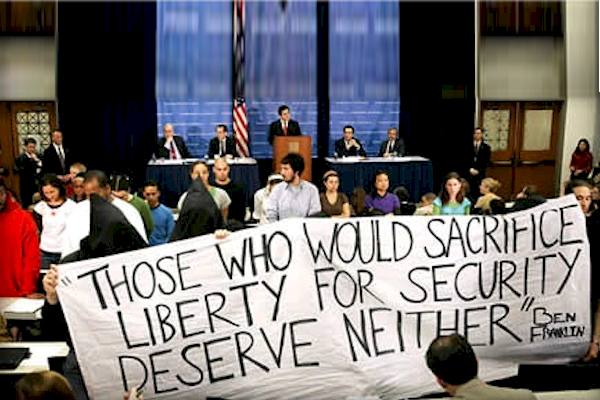 In recent months, this critical debate has found its way into Canada as the Harper government officially proposed Bill C-51,[i] otherwise known as the Anti-Terrorism Act 2015. The bill has been highly controversial,[ii] with many legal experts expressing concern over the relatively unregulated exchange of information proposed in the bill.

A few weeks after the bill was introduced, media across Canada cited an Angus Reid poll claiming that 82% of Canadians were in favour of the bill. [iii]  Not surprisingly, a closer look at the poll made it clear that very few Canadians have any concrete idea what’s in the legislation.  36% of the respondents had merely seen headlines about the bill, and another 20% had been totally unaware of it. [iv]

CJPME wonders how some of these Canadians would have responded to some of the following questions:

But let’s not waste time on details.  With a name like “The Anti-Terrorism Act,” Bill C-51 is an easy sell to most Canadians. Very few of us are going to argue that the Canadian government shouldn’t be fighting terrorists. But how much are we going to compromise our privacy in the process?  And do we really understand what’s at stake when we cede our privacy?

Carnegie-Mellon University researcher Alessandro Acquisti and his team found that they could track down key personal information from a single anonymous photo of a person simply by using face recognition and data mining technology.  He and his team also demonstrated that HR departments make biased decisions based on publicly available photos of job candidates. [v]  Upsetting, especially when we realize that the candidates have no idea that they are being screened and dismissed in this way.

We would probably also be upset if the government screened us as part of crime investigations in a similar way.  How would we feel if we were to become a “person of interest” if one of our 297 Facebook friends had the cell phone number of someone who was once a member of an extremist organization?  Not so farfetched with the new measures under Bill C-51.

Some people argue that there’s no need to fear a loss of privacy if we don’t have anything to hide.  But just because we may have nothing to hide does not mean we may wish everything about us to be shared.  The whole idea of privacy hinges on the right to decide for oneself what information should be shared.

In a sense, this brings us to the somewhat cliché concept of a “Big Brother” state. When we leave our information in the hands of the government, we essentially assume that our state officials are somehow wiser and better equipped than us to decide whether our own privacy is necessary. We allow the government to literally act like a paternalistic older brother who somehow “knows best.”

If Bill C-51 is passed in its current form, there will be very little oversight of information sharing amongst intelligence agencies. This means that there is almost no way to ensure that Canada’s government is held accountable to the public.

UK journalism professor Heather Brooke argues strongly against this “government knows best” attitude.  She likens uninhibited government access to our lives to society under the pre-enlightenment church. She warns of the seductive nature of the power given to governments when they have unlimited access to data.  She also advises extreme scepticism regarding government demands for more personal information. [vi]

Protecting Canadians from terrorist attacks is a noble pursuit, but government is supposed to serve us, not the other way around. When she learned that her telephone lines had been bugged illicitly by the US “National Security Agency,” Brazilian President Dilma Rousseff had this to say: “If there is no right to privacy, there can be no true freedom of expression and opinion, and therefore no effective democracy.”[vii]

[v] Acquisti, Alessandro, “What will a future without secrets look like?,” Ted Talks: The Dark Side of Data,  http://www.ted.com/playlists/130/the_dark_side_of_data