CJPME Political Blog, June 10, 2015: It’s time to take a reality check on the competing claims about the “boycott Israel” (BDS) movement in Canada.  For starters, let’s be clear on two things.  First, the Harper government doesn’t seem bent on jailing Canadian BDS activists anytime soon, and second, the BDS movement will never bring about the “destruction” of Israel. 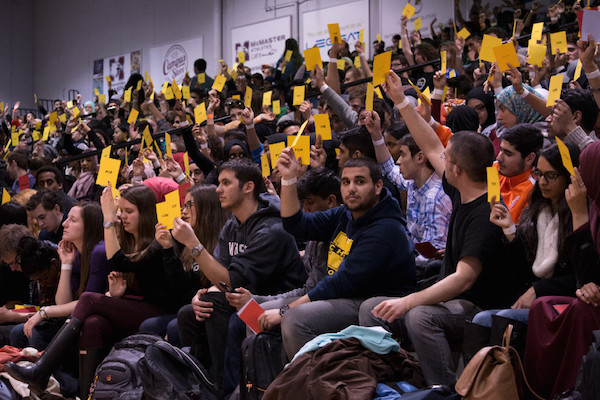 The assorted arguments in op-eds by Murray Dobbin for BDS, and by Mike Fegelman against BDS in The Hill Times in recent weeks contain a virtual laundry list of extreme debate devices. Between the two pieces, it’s easy to feel like there’s no middle ground for reasonable-minded Canadians.  But there is.

The vast majority of Israelis are not extreme like Israel’s new justice minister Ayelet Shaked, as one might understand from Dobbin’s piece. And despite what Fegelman might say, the vast majority of BDS activists do not seek the “criminalization” of Israel.

The BDS (for “boycott, divestment, and sanctions”) movement against Israel is borne out of popular international impatience for a peace agreement to end Israel’s military occupation of Palestinian land. As Hagai El-Ad, executive director of the Israeli human rights organization B’Tselem pointed out in a New York Times editorial earlier this week, “Military occupations are meant to have an end. And common sense says half a century is not ‘temporary.’”

The demands of BDS draw from international legal precedent and existing UN resolutions. The BDS manifesto, signed by 170 Palestinian civil society organizations, seeks 1) an end to Israel’s occupation, 2) full rights for Palestinian citizens of Israel, and 3) the right of return or compensation for Palestinian refugees.

Thus, BDS is rooted in international law and is inherently non-violent. It is also eminently democratic, driven by the personal conviction of those who choose to abide by it. It targets Israel because Palestinian civil society has requested such action. And one day it will end: when Israel respects its obligations under international law.

Ultimately, BDS does not hold Israel to a higher standard than it claims for itself. There are countries that commit equal or greater human rights violations, but they do not claim a place among Western democratic nations as does Israel.

Some argue that the second and third demands of the BDS movement threaten the demographic vision for Israel held by certain people. The BDS movement, however, fittingly promotes the protection of the rights of indigenous Palestinians, with no reference to demographics. Had Canada been forced to respect the human rights of its own Indigenous peoples 150 years ago, most would agree that Canada would be stronger and richer as a country today, regardless of its demographics.

Israel’s leadership is shrewd and most pundits would probably agree that solutions will be found before BDS will ever bring Israel to its economic knees. As the BDS movement continues to grow, Israeli leaders will finally address legitimate grievances of the Palestinians that they’ve been avoiding for decades.

In fact, beyond the economic pain, it is the international shame that Israelis will feel at the threat of sanctions that will drive them back to good faith negotiations with the Palestinians. With its self-image as a “Western democracy,” Israel will be loath to suffer under international sanctions as do countries like Iran, Liberia and North Korea. Israel’s recent scramble to avoid FIFA sanctions is a likely precedent for future diplomatic problem-solving.

Most Canadians want Palestinians and Israelis to live in peace and security, side-by-side, in viable countries, with a nod to the human rights abuses suffered by the Palestinians over decades. After a half century without a solution, BDS promises to bring all this about without bloodshed. So let’s calm the rhetoric and discuss the true justifications and shortcomings of BDS for what they are.