CJPME Political Blog, June 26, 2015: Not since the early 1970s has Egypt been so militarily active in the Middle East. The calamitous legacy of Egypt’s previous military engagements in Yemen and Israel had long deterred an active military response to regional insecurity. Yet, under the emboldened leadership of President Abdel Fatah al-Sisi, Egypt has expanded police and military operations in the Sinai Peninsula, and it has been playing a pivotal role in countering Islamic State activities in eastern Libya and in the Saudi-led coalition airstrikes in Yemen. Indeed, this bellicose strategy signals a clear break from abstention in regional conflicts. 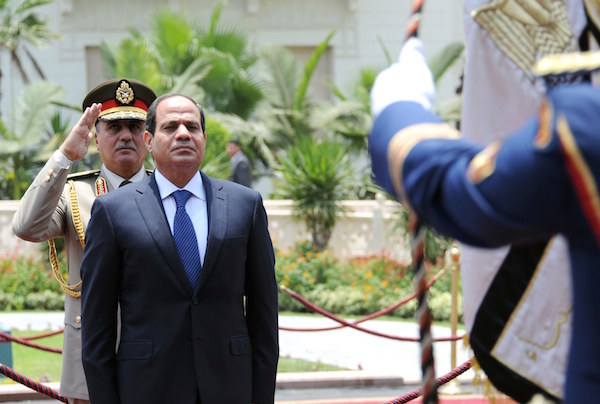 At first glance, Egypt’s active involvement in foreign conflicts would seem incongruous against the backdrop of the country’s most pressing and interwoven problems: fractious domestic politics, a weakened economy and the persistent threat of militant activity in the Sinai Peninsula. Yet, this drastic shift in strategy underlies a greater play at hand: a bid to consolidate power at home by “selling” militarism to key foreign powers.

Egypt is shoring up allies

Egypt’s active participation in the Saudi-led coalition against the Houthis goes beyond the prism of national or regional security. It is natural to assume that Egypt’s involvement in the Gulf Cooperation Council’s campaign against the Houthis is primarily to ensure secure commercial access to the Red Sea and the Suez Canal.  A far less public benefit of signing on to the GCC’s agenda, however, is that Egypt has secured critical aid that has kept its economy afloat.  Saudi Arabia, Kuwait and the UAE have provided over $23 billion in economic support to Egypt - including fuel shipments, financial aid, infrastructure, health and education.[i]

In a bold move, Egypt has played off souring relations with the United States to court Russia, tapping on a Russian desire to expand its influence in the Middle East. To that end, President Sisi’s diplomatic prowess has allowed him to play the middleman in Russian arms support to Egyptian-backed Libyan commanders, circumventing the UN ban on direct arms sales to Libya by “mediating” purchases.[ii] In the process, Sisi also locked in a $3.5 billion arms deal with Moscow.[iii]

Likewise, the Sisi regime restored the decades-long status quo with Israel by closing the Rafah border crossing during the 2014 Gaza conflict, destroying tunnels and providing intelligence against Hamas.[iv] This support was pivotal to Israel’s devastating attack on Hamas in Gaza.  It also indirectly helped Sisi to cut support for militant groups in the Sinai Peninsula while restoring a valuable “security” partner in the region.

Egypt’s self-proclaimed role as a “pioneer” in counter-terrorism, bolstered by the approval of its highly questionable anti-terrorism legislation, has helped it secure substantial military support from key Western powers. Partly as a result, the United States overturned its freeze on military aid to Egypt, valued at $1.3 billion, restoring Egypt as the US’ second largest aid recipient after Israel.  Also partly as a result, France negotiated a colossal arms deal with Egypt valued at $5 billion.[v] Moreover, Sisi’s recent bilateral talks in Germany, coupled with his upcoming visit to the United Kingdom, highlight increasing acquiescence to the regime in Western eyes.

President Sisi has taken advantage of Egypt’s perennial role as a key regional mediator to strengthen his power base, presenting his military authoritarianism as a strong predictor of stability in an increasingly volatile region. In effect, Sisi’s policy towards domestic terrorism and regional security has welded his domestic agenda to his international agenda. This was done in order to align himself with the interests of both Western and regional powers. To that end, this has enabled him to garner crucial support from all sides; foreign powers see him as “the most sustainable puppet to utilize”[vi] in order to exert their influence in the region.

In turn, the self-serving interests of these powers have enabled the regime to insulate itself from international condemnation for its repressive tactics at home. Sisi has been free to implement what can be described as “neoliberal militarism”,[vii] namely an autocratic management of economics and politics, at the expense of the rule of law. The regime is only half-heartedly criticized for its lamentable human rights record while enjoying the tacit acceptance of Western powers for its sweeping security laws to combat extremism and domestic terrorism.

Though Sisi enjoys widespread military support for his  “war on terror,” the regime’s lack of accountability does not come without potential shortcomings. Sisi’s dependence on external sources of power as opposed to local legitimacy risks exacerbating internal cleavages and inflaming militant movements. According to the Carnegie Endowment for Peace, “widespread human rights abuses threaten to push alienated Egyptians into the arms of extremist groups, as well as create a broader swath of society unwilling to help the army or police defeat them”.[viii] Add to this Egypt’s ill-defined entanglements in regional conflicts and it risks reaching a ‘boiling point’ that could unravel stability in an otherwise fragile state.

Egypt’s pivotal role in the Middle East cannot be underestimated, but it should not come at the price of inclusive governance and the rule of law. The democratic façade by which Sisi has shirked international scrutiny must be overturned, and this responsibility lies with the very “moralistic” states that have fallen for Sisi’s ruse so handily. Canada, for its part, should no longer ignore the blatant hypocrisy that has enabled Sisi to reverse Egypt’s democratic transition. Canada’s condoning of autocratic practices for the dubious short-term benefit of regional peace could ironically lead to more volatility in the region, ultimately playing into the hands of the militant and extremist groups that Canada opposes.