Elizabeth May should apologize to Green Party members.  May’s behaviour since the Green Party convention a few weeks ago has not only left the public deeply confused, but also humiliated party members. 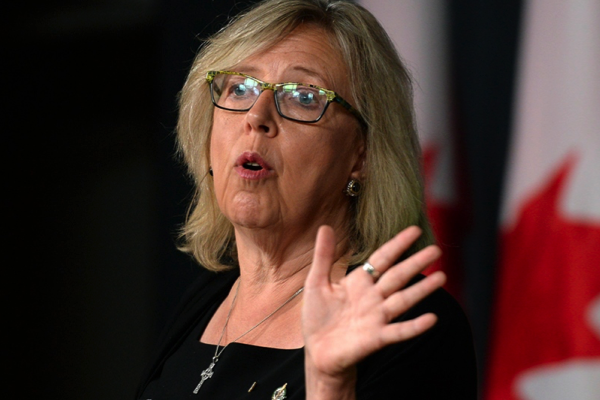 No matter how you turn it, at issue is the passage of a Green resolution supporting the Boycott, Divestment and Sanctions (BDS) movement.  At its core, this movement seeks to pressure Israel to respect the human rights of the Palestinians.  The three demands BDS are 100% aligned with international law and with existing Canadian foreign policy.  Despite its non-violent and democratic approach for a peaceful resolution to the Israel-Palestine conflict, some like May will have none of it.

May is free to disagree, but she should not wreck the party and its credibility to have her way.  Before she lurches any further into the china shop, May should apologize, starting by acknowledging the facts about the passage of the resolution.

Concerning these facts, May’s chat with CBC’s Rosemary Barton was typical of several interviews May gave after the Convention.  To Barton she falsely asserted, “I'm quite certain most of our members don't support this policy.”  Contrary to her claim, however, in on-line voting prior to the Convention, the BDS resolution received 58.5% of the on-line votes – clear proof that even before the Convention, most members of the party did support the resolution!  After debate at the Convention itself, the support for the resolution was overwhelming – so much so that there wasn’t even a need for a count of hands.

May has also argued that it was largely because the party adopted Robert’s Rules of Order that the resolution passed.  This is nonsense.  May herself supported the move to Robert’s Rules during procedural votes at the beginning of the Convention.  As for the resolution, it 1) met the required majority via the on-line voting, 2) passed successfully through committee at the Convention, and 3) was passed overwhelmingly on the floor.  Hardly a procedural fluke!

To the Huffington Post, May even tried to blame the passage of the resolution on the fact that her microphone was cut off.  In fact, on the floor of the Convention, May exceeded her time to speak against the resolution and, refusing to stop speaking, was cut off.  This happened to all members who exceeded their allotted debate time at the Convention.  May perhaps overestimates her speechifying ability if she believes that her microphone was the deciding factor.

Next, May should apologize for bad-mouthing party members who worked in good faith for the passage of the BDS resolution.  Green Party Quebec leader Alex Tyrrell points out that May publicly called some of them “one-issue people,” and even made allusions to anti-Semitism.  She has also publicly mused that some Green members joined the party only to enact this one resolution.  For Green Party members who worked for months for the passage of the resolution – including its 32 sponsors – such comments are offensive and inappropriate.

May should also apologize for seeking to overturn the grassroots will of members. Tyrrell referred to the resolution as a “pristine exercise in grassroots democracy,” and indeed it was.  Yet rather than accept this vote as the decision of the membership, May immediately threatened to resign in protest.  In addition to hanging this Sword of Damocles over the party, May actually confesses to Barton that her intent to resign would be to quickly force another convention and hence, a chance to reverse the BDS resolution.

Finally, May should apologize for launching a questionable process to overturn the resolution.  Earlier this week, May announced that the Green’s Federal Council had voted to call a special meeting to revisit the resolutions passed at the Convention – no doubt with the intent of overturning the BDS resolution.  Yet Section 6.4 of the Green Party Constitution asserts that the Federal Council is bound to implement the decision of the members’ meetings.  The Green Federal Council would also be wise to note that Section 6.2 of the Constitution states that “Decisions of the Members in General Meeting shall have precedence over decisions of Federal Council.”

As May pursues her false course with her Federal Council, she has frequently mentioned “consensus” as the necessary basis for Green Party policy.  Yet Greens should have a right to know what May means by “consensus.”  In fact, prior to any dubious special meeting, Greens should demand clarity as to how resolutions will be evaluated for “consensus.”  If the past few weeks are any indication, “consensus” may simply be synonymous with “whatever Elizabeth May wants.”

In a meeting I had with May in June, she bragged to me about how the Green Party is the only federal party where the party leadership is bound by the policy developed by the grassroots.  For her own credibility, and for the ongoing viability of the party, I would ask her to live up to that boast.