Will Elizabeth May Tear Apart the Federal Greens?

Normally, political party conventions end with leaders trumpeting their satisfaction with their party’s progress and accomplishments. Not so last month with Canada’s federal Greens.

Barely able to wait for the doors to close on August’s 3-day convention, Green leader Elizabeth May publicly and harshly criticized a key outcome of the convention.  At issue was the passage of a resolution calling for the party to adopt the international Boycott, Divestment and Sanctions (BDS) movement.  BDS is a tactic to pressure Israel to respect the human rights of Palestinians.

“As leader, I am disappointed that the membership has adopted a policy in favour of a movement that I believe to be polarizing, ineffective and unhelpful,” May announced on the evening the convention closed. 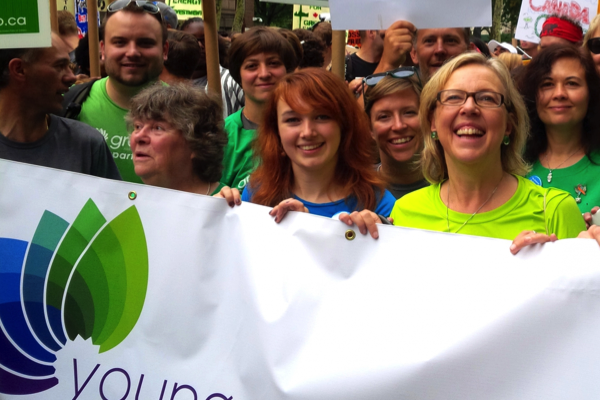 But as leader of a party which so frequently touts the need for “evidence-based policy,” Elizabeth May herself has fallen woefully short in recent weeks.  In fact, her behaviour since the convention may well tear the party apart.

First, BDS is far from a fringe movement in Canada.  Major Canadian organizations have endorsed BDS or its principles, including unions, non-profits, church conferences, and student government associations.

Second, grassroots support for Palestinian human rights, per se, is quite strong in Canada.  Progressive author Yves Engler cites a poll that suggests that 16 percent of Canadians have strong sympathies for the rights of Palestinians.  May would be wise to note that this figure is about five times the support that the Greens got in the last federal election.  In fact, this calculation may be part of the reason that both the US and UK Green Parties have unhesitatingly adopted BDS.

On the flip side, it’s hard to imagine how May’s unabashed denunciation of BDS will ever attract right-leaning voters to go Green.

But aside from offending a potentially supportive constituency, May also misreads the support for BDS within the existing Green membership.  Since the convention, May has asserted that BDS does not have broad-based support within the party.  Yet none of the polls taken within the party in recent months support this position.  In an on-line vote prior to the convention, 58.5% of Greens supported the BDS resolution.  At the convention itself, the BDS resolution passed overwhelmingly on the floor.  In an imperfect internal survey launched by the Green Party after the convention – with May threatening to resign over the BDS resolution – only 44% of members recommended repealing the resolution.  So, in fact, none of these polls support May’s recent assertion that the “vast majority” of Greens are with her on this issue.

Not only has May misread the political realities of the BDS movement, she has also undermined the democratic processes of the party.  The Green Constitution asserts that the party’s leadership respect the decisions coming out a general meeting of members.   Yet May has moved heaven and earth to call for a new meeting of members in early December, ostensibly to “revisit” resolutions passed in August.

Perhaps more destructive to the party, however, has been May’s disparaging behaviour toward the BDS resolution’s Green sponsors and supporters.  Following the convention, she has referred to them as “one-issue people,” and suggested that many of them became Green members simply to push the BDS issue.  In response to the attacks, the BDS resolution’s author, lawyer Dimitri Lascaris, responds “There are 32 sponsors of this resolution, and the vast majority are longstanding members of the party who have advocated for many different causes over the years other than Palestinian rights.”

Earlier this week, May fired three well-liked members of her shadow cabinet – including Lascaris – who were also sponsors of August’s BDS resolution.  Following weeks of highly public attacks on the BDS resolution, the shadow cabinet members had joined other sponsors of the resolution to defend their BDS proposal.  In their statement, the group responded to criticisms of their resolution from BC Green leader Andrew Weaver, who had referred to them as an “extremist fringe element.”  In their admittedly measured response, the group suggested Weaver was “misguided” for being unable to appreciate the need for such a resolution.  May demanded that her shadow cabinet members apologize to Weaver; when they refused, they were sacked.

Through all this vitriol, a lot of the Green’s dirty laundry has been aired.  Alex Tyrrell, Quebec Green Party leader had little good to say about May’s leadership style.  He also provided email evidence that May had told federal Greens to have no association with him.  Another member of the shadow cabinet expressed shock at May’s seeming willingness to “sow division” among Greens.

May, naturally, has a very different spin.  In an interview earlier this week, May stated, “The reasons we have any signs of people being unhappy is because there were winners and there were losers.”  May would be wise to note that her side was the one that “lost” the BDS vote at the August convention.  But in the end, all Greens will end up losers if May tears the party apart over this issue.