CJPME Political Blog, Nov. 16, 2016: The naysayers on both sides of the issue have been proven wrong.  When the Green Party passed a motion in support of the Boycott, Divestment and Sanctions (BDS) movement on Israel in August, conservative voices felt Elizabeth May would be justified in stepping down as party leader.  Progressive voices, however, urged her to stay on, and not to disavow the BDS movement. 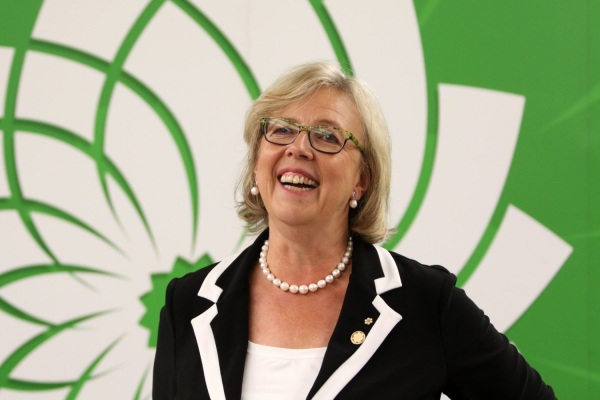 May and the federal Greens may do both.

With the release of a draft “compromise” resolution last week, the Green Party of Canada (GPC) seems poised to advocate economic pressure on Israel – while not endorsing the BDS movement – and May seems comfortable leading the party forward with this position.

The international BDS movement, endorsed by a Green resolution in August, seeks to pressure Israel to respect the human rights of the Palestinians. Even though the three core demands of BDS align with both international law and existing Canadian foreign policy, the GPC is the only major federal party to have passed a pro-BDS resolution.

The incentive for a compromise around the issue was pretty clear.  While May’s performance in Parliament is not without its critics, May remains the most familiar Green face in Canada.  Polls indicate that May has an average approval rating of 50 percent – second among federal leaders only to Prime Minister Trudeau.  In contrast, the CBC reports that provincial Greens are largely unknown in their home provinces.  Bottom line, the federal Greens would likely lose significant visibility were May to resign as leader.

May herself indicates that she considers her work as a public figure far from complete.  In addition to other files, she has been heavily focused on the prospect of electoral reform in recent months.

In a testament to some good backroom negotiating, both sides seem to have gotten what they wanted in the new compromise resolution.  The new resolution detaches Canada’s Greens from the international BDS movement – founded by Palestinian civil society in 2005.  This seems to have been a priority for May: removing the actual “B.D.S.” abbreviation from official party policy.

Yet for BDS proponents, the new resolution still holds Israel to task for ongoing human rights abuses against Palestinians.  Like BDS, the resolution also expresses support for Palestinian statehood, calls for the repatriation or compensation of Palestinian refugees, and demands equal rights for Palestinian citizens of Israel.

As a symbol of unity, both May and Dimitri Lascaris were quoted in the communiqué that went to Green party members last week.  Lascaris is the former GPC justice critic and, as the author of the August BDS resolution, the most prominent pro-BDS voice within the GPC.

Many will welcome the détente within the GPC that may result from this compromise resolution.  Some Greens see the issue as a distraction from the core mandate of the party – protecting the world’s environment assets – “ecological wisdom” in Green parlance.

But many other Greens see the Israel-Palestine conflict as a determinant global issue of social justice.  After the environment, “social justice” is also listed as the next highest priority for Canada’s Greens.  By tackling this issue and others, Canada’s Greens counter the common perception that they are a one-issue party.

But this is politics, and nothing is guaranteed.  Until the compromise resolution is passed, August’s pro-BDS resolution remains on the books.  Party members are due to come together in Calgary on December 3-4 to discuss not only the “compromise” resolution, but potentially four other resolutions relating to BDS.  Whatever the outcome at the meeting itself, the GPC has also hinted that there will be an on-line ratification step involving all party members after the meeting.

May has also stated that the party will “review and adopt improved processes” for party policy development.  In public statements, May frequently attributed the passage of the BDS motion in August to flawed convention practices.  Proponents of BDS within the party may be wise to watch such developments closely.

After the August meeting, May attributed internal party dissension to the fact that “there were winners and there were losers.”  With a little luck at the December meeting, everyone might come out feeling like a winner.