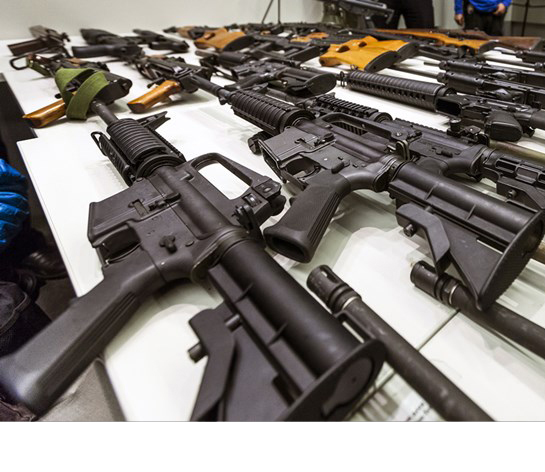 CJPME is pleased to publish the next of a 13 part election series analyzing the positions of Canada’s political parties. CJPME hopes that, by revealing what parties have said and done on key Middle East issues, Canadians will be better informed voters in the upcoming elections. Our next analysis studies each party’s position on the Arms Trade Treaty and Arms Control.

Up until this year, Canada was the only country in the North Atlantic Treaty Organization (NATO) that had not yet signed the international Arms Trade Treaty (ATT). The Harper government refused to sign on to the ATT when it first entered into force in 2014 The Conservatives under Andrew Scheer have maintained this same isolationist posture when considering arms exports, and favour the economic benefit of arms sales over human rights concerns, even when dealing with the most egregious human rights offenders.  As such, the Conservatives receive a failing grade. While the Liberals can be commended for finally signing onto the ATT, they left significant loopholes in Bill C-47 – the implementing legislation.  Unfortunately, these loopholes will enable Canadian arms to continue to end up in the hands of abusive regimes.  The NDP scored well, given the party’s longterm attempts to amend the Liberals’ legislation and to raise the issue both online and in the House of Commons.  The Bloc Québécois and the Greens, for their part, both called on the government to amend Bill C-47’s loopholes, and thus received a positive score.

In 2013, the ATT was passed by the UN General Assembly, with the international community ratifying the landmark treaty in 2014. The UN Conference on the ATT was hailed by many as the most important conventional weapons conference of this generation. Nevertheless, Canada was notably absent from the multilateral effort, as former Prime Minister Stephen Harper refused to sign and ratify the ATT.[2] In December 2018, the Trudeau government passed Bill C-47 and initiated Canada’s long-awaited accession to the ATT.[3] Canada deposited its instrument of accession to the ATT in June 2019, and will become an official State Party to the treaty in September 2019.[4]

Nonetheless, the Trudeau government has faced significant criticism from human rights organizations, who consider Bill C-47 to be a flawed piece of legislation that violates the letter and spirit of the ATT.[5] Indeed, Bill C-47 has many loopholes that would allow for Canada to continue arms shipments to countries with poor human rights records. Canada currently maintains a $15 billion-dollar arms agreement with Saudi Arabia, making it the 2nd biggest arms supplier to the Middle East – to one of the world’s worst human rights abusers. Stronger arms controls, which adhere to the spirit of the ATT, would prevent similarly unprincipled deals from being brokered in the future.

In the lead-up to the 2015 federal election, Justin Trudeau promised to ratify the ATT, stating: "Canada needs to be once again a constructive actor on the world stage focusing on our national interests, which include security and stability in places like the Middle East."[6] A few years into their mandate, the Liberals introduced Bill C-47, but many Canadian human rights organizations argued that the bill failed to meet the standards set by the ATT. Among other things, Bill C-47 does not require that arms sales to the US be regulated or recorded. It also includes a provision that would allow Cabinet Ministers to override the ATT itself. MPs from opposing parties introduced amendments to Bill C-47 in committee, in an attempt to close these loopholes. However, the Liberals on the committee voted down each of these amendments. Therefore, despite being made aware of the bill’s flaws, the Liberals refused to modify the legislation in any way that would further strengthen arms controls.  Meanwhile, the Liberal government refuses to alter its $15 billion contract for light armoured vehicles with Saudi Arabia.  Meanwhile, the Liberals have failed to follow up seriously on allegations that Canadian-made weapons are being used against civilians in Saudi Arabia and Yemen.

Under Stephen Harper’s leadership, the Conservative government had no qualms about negotiating arms deals with human rights abusers. As a result, under the Harper government, there was an increased in arms exports to countries with poor human rights records.[7] Perhaps the most notorious of these deals is the still-active $15 billion-dollar contract negotiated between the Harper government and Saudi Arabia. In keeping with his predecessor, Conservative leader Andrew Scheer has maintained his support for the arms deal with Saudi Arabia, despite the country’s ongoing human rights abuses.[8]

Like his predecessor, Andrew Scheer has been vocal about his opposition to the Arms Trade Treaty. In 2014, the Harper government isolated itself from Canadian allies at the UN when it refused to sign the Arms Trade Treaty. Many Canadian human rights organizations, including Project Ploughshares, criticized the government for allowing Canada to be the only NATO member not to have signed the ATT. At the time, a Conservative Foreign Affairs spokesperson justified Canada’s opposition to the Treaty by claiming that it might infringe on the rights of Canadian firearms-owners – a claim that is misleading and false. Andrew Scheer has largely maintained this same rhetoric in opposition to the ATT. Conservative Members of Parliament also voted as a block against Bill C-47, which formalized Canadian accession to the ATT. Ahead of the vote, Conservative Foreign Affairs Critic Erin O’Toole once again echoed Harper-era rhetoric, claiming that Bill C-47 would force gun owners to submit to a federal registry.[9]

Over the past several years, the NDP has campaigned vigorously for stronger arms controls and more rigorous reporting standards. While many NDP leaders and individual MPs have spoken out on this issue, the NDP’s former Foreign Affairs Critic Hélène Laverdière was the most vocal on the issue. She has published dozens of press releases and tweets, introduced numerous motions, and even written to Minister Freeland calling on the government to examine its arms exports regime.[10]

During the 2015 federal election debate, then-NDP Leader Thomas Mulcair expressed his support for Canadian accession to the ATT, arguing that it would ensure Canadian-made weapons did not fall into the wrong hands.[11] Since 2015, the NDP has prioritized the ATT file, consistently raising the issue in the House of Commons. The NDP has routinely echoed the concerns of many human rights organizations in arguing that Bill C-47 does not comply with the standards required by the Treaty. Indeed, Hélène Laverdière even went so far as to state that Bill C-47 “undermines” the Treaty itself.[12] Expressing significant concern over the loopholes in the Liberal government’s Bill C-47, the NDP introduced an amendment to the bill that would have required Canada to “reassess existing arms export permits should new information about human rights abuses come to light”[13] – likely in reference to the Saudi arms deal. However, the Liberal majority in the House of Commons Foreign Affairs Committee rejected this amendment.

The NDP has also taken an uncompromising stand against arms sales to human rights abusers. Most notably, the party has been quite vocal in its opposition to the Saudi arms deal. Party MPs have repeatedly called on the Canadian government to cancel the deal, arguing that “continuing to send weapons to Saudi Arabia would be a complete abdication of our collective responsibility towards the lives of Saudi Arabians and Yemenis.”[14]

From the start, the Bloc Québécois expressed support for ratification of the ATT. During the debates on Bill C-47 in the House of Commons, Bloc MP Luc Thériault pointed out the shortcomings of the bill, asking: “What is the point of ratifying a treaty if a country [Canada] does not respect either the letter or spirit of that treaty?”[15] Raising the issue of the Saudi arms deal specifically, Thériault accused the government of turning a blind eye to human rights abuses, claiming that “the Liberals always put economic considerations ahead of human rights.” Indeed, Bloc MPs have, on numerous occasions, demanded that the Prime Minister cancel the $15 billion-dollar arms deal with the Saudis. On the whole, arms control has not been a priority-issue for the Bloc Québécois. Nonetheless, the party has demonstrated principle in speaking out against arms exports to human rights abusers and demanding stricter regulations.

As with the Bloc Québécois, arms control has not been a forefront issue for the Greens. Nonetheless, Green Party Leader Elizabeth May has maintained a principled position on the issue.

Throughout the Bill C-47 debates, May called out her Conservative colleagues for their misleading comments comparing Bill C-47 to the long-gun registry. At the same time, May repeatedly called on the government to strengthen Bill C-47 and close the loophole on reporting arms exports to the US.[16] May has also criticized the government for its arms sales to Saudi Arabia, repeatedly reminding the Liberals that Canadian-made weapons are being used on civilians in Saudi Arabia and Yemen.[17] May has taken to Twitter on several occasions to vocalize her opposition to the Saudi arms deal. On the whole, the Green Party unequivocally opposes arms sales to countries with poor human rights records.