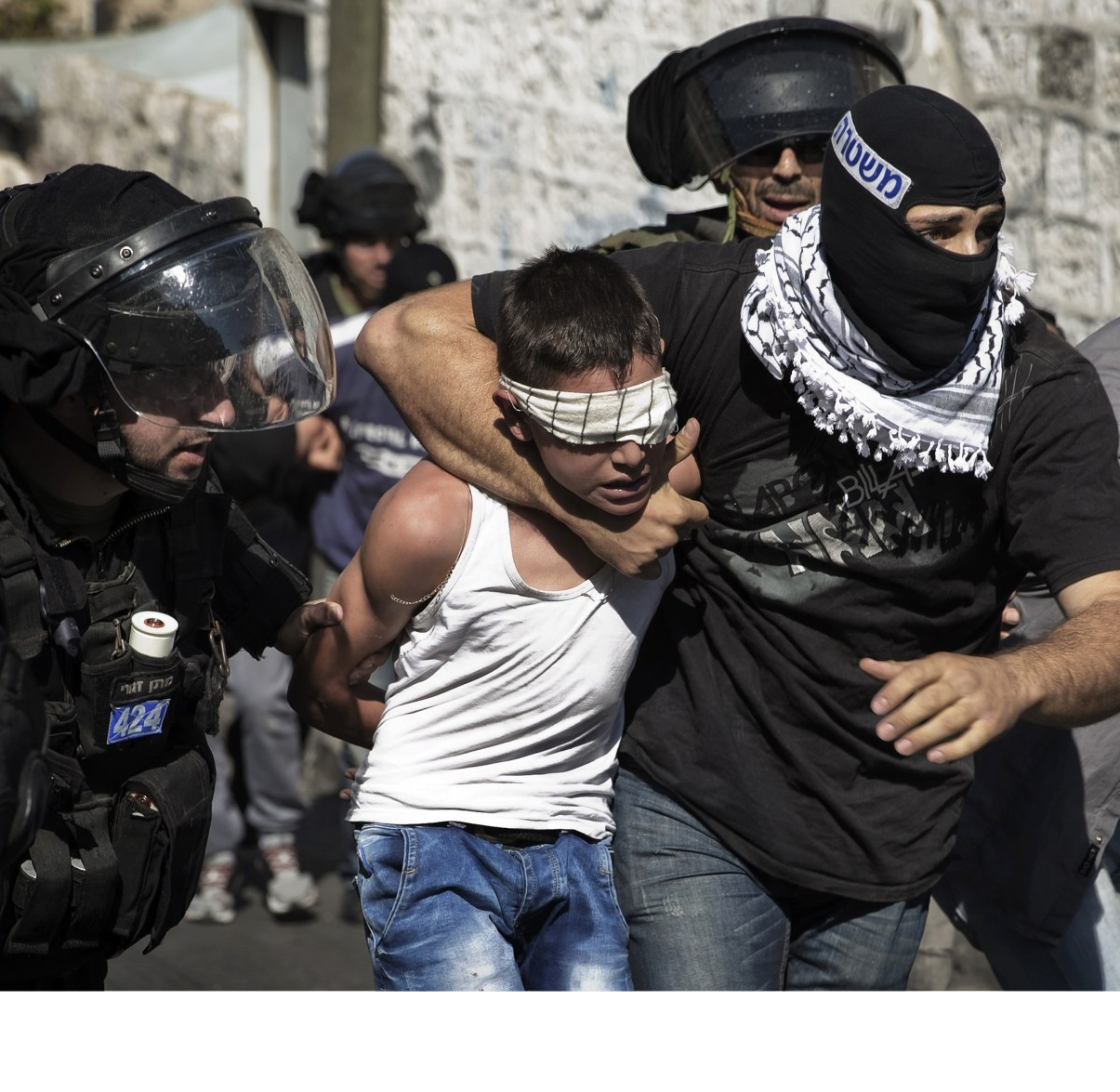 CJPME is pleased to publish the next of a 13 part election series analyzing the positions of Canada’s political parties. CJPME hopes that, by revealing what parties have said and done on key Middle East issues, Canadians will be better informed voters in the upcoming elections. Our next analysis studies each party’s position on the Incarceration of Palestinian Children.

Over the past couple years; Israel’s systemic incarceration of Palestinian children has gained considerable international attention. Two parties, the NDP and the Greens, have sought to elevate this issue in Canadian politics, taking several steps to urge the Trudeau government to put pressure on Israel to end its practice of detaining Palestinian minors. While not as vocal as the NDP and the Greens, the BQ has demonstrated principle on this issue, and has stood in solidarity with NDP and Green MPs at press conferences that address Israel’s mistreatment of Palestinian children.
Standing in stark contrast with these parties is the Liberal government. Despite being questioned on numerous occasions about Israel’s systemic incarcerations of Palestinian children, the Liberal government has refused to condemn Israel’s actions. While individual Liberal MPs put their names to a report decrying Israel’s incarceration of Palestinian children, the report was a bi-partisan effort following a parliamentary trip to the Palestinian territories. The Conservatives scored the lowest in this evaluation given their unwillingness address this issue in any way.

Israel is the only country that “automatically and systematically prosecutes children in military courts that lack fundamental fair trial rights and protections.”[1] Each year, Israel arrests, detains, and prosecutes 500 to 700 Palestinian children in the military court system.[2] Israel is also one of only 10 countries to allow children to be held under administrative detention, “an alternative to charging them with a criminal offence, where there are concerns that there is insufficient evidence to prosecute a child”.[3][4] Since in most cases administrative detainees are not informed of the charges that are held against them, Palestinian minors are unable to mount a defence. This clearly violates the Fourth Geneva Convention (Art. 70 and 71) which “requires that a fair trial be established and the accused clearly informed of their indictments”.[5] Under Israeli military law, the Israeli army is allowed to administratively detain Palestinian children as young as 12 years old, and Palestinians over the age of 16 are considered and sentenced as adults.[6]  In contrast, all Western countries consider 18 the age of majority.

When incarcerated by Israel, Palestinian children are exposed to prison overcrowding, poor quality and inadequate amounts of food, and harsh treatment by prison officials.[7] Reports by the UN Committee on the Rights of the Child and Defense for Children International (DCI) Palestine also shed light on cases of torture and mistreatment of Palestinian child prisoners; there are reports that children had their heads covered, [8] were subjected to beatings and were suspended by their arms and legs.[9] This, despite Israel ratifying the Convention on the Rights of the Child in 1991, which states that “children must not be unlawfully or arbitrarily detained, and must not be subjected to torture, inhuman or degrading treatment or punishment.”[10]

As a signatory to the Convention on the Rights of the Child, the Fourth Convention of Geneva, and the UN Convention against Torture, the Canadian government has the obligation to demand Israel to respect its commitments under international law.

In 2013, DCI-Palestine and the American Friends Service Committee (AFSC) launched the “No Way To Treat A Child” (NWTTAC) campaign in the United States, which aimed to put an end to the systematic ill-treatment of Palestinian children in Israeli military detention. The NWTTAC campaign eventually reached Canada and gathered dozens of prominent national, regional and local partners in Canada, including CJPME, Amnesty International Canada, and the United Church of Canada.

In late 2017, following the arrest of blonde-haired and blue-eyed Palestinian teen activist Ahed Tamimi, Israel’s detention of Palestinian minors began to receive more international attention. The internationally community was outraged after Tamimi was arrested by Israeli soldiers in December 2017 for slapping a soldier. Tamimi was arrested after the release of a video in which she was slapping and kicking two Israeli soldiers who were breaking into her family’s home. Although Tamimi is not the first Palestinian child to be arrested by Israeli forces, she has received unprecedented international attention and quickly became a symbol of Palestinian resistance.[11] Canadian UN Special Rapporteur on Israel-Palestine, Michael Lynk, argued for the release of Tamimi, stating that “none of the facts of this case would appear to justify her ongoing detention.”[12]

Throughout its 4-year tenure, the Trudeau government remained silent on the subject of imprisoned Palestinian children and their conditions in Israeli jails. Since his time in office, PM Trudeau has never once condemned Israel’s violations of international law regarding children and prisoners’ rights.

Despite being questioned about her case in the House of Commons, the Trudeau government failed to condemn the arrest of Ahed Tamimi.

A number of Liberal MPs took part in the trip organized by the Canada-Palestine Parliamentary Friendship Group, and signed the trip’s report, which called on the Canadian government to intervene on behalf of Palestinian child detainees. It is important to note, however, that among the seven Liberal MPs who participated in the trip, two refused to sign the report.

The Conservative Party’s silence on Israel’s treatment of Palestinian child detainees stands in stark contrast with the Party’s strong condemnations of the Palestinians’ detention of an Israeli. In June 2006, Hamas kidnapped 19-year old Israeli soldier Gilad Shalit who was serving his compulsory military service for Israel. He was the first Israeli soldier to be captured by Palestinians since 1994.[13] Following his capture, in 2006, the Harper government released several robust statements urging the immediate release of Gilad Shalit.  Like this predecessor, Conservative Leader Andrew Scheer has never once condemned Israel’s abuses against Palestinian children. When Ahed Tamimi was arrested by Israeli soldiers in December 2017, Scheer remained silent on the issue.[14]

It is noteworthy that Garnett Genuis – the only Conservative MP to have participated in the trip organized by the Canada-Palestine Parliamentary Friendship Group  – did not sign the report from the trip.

The NDP was by far the most vocal Canadian party on this issue. In January 2018, NDP Foreign Affairs Critic Hélène Laverdière sent a letter to Foreign Affairs Minister Freeland asserting that Ahed Tamimi’s case is “one of many troubling cases of military detention of children under the Israeli occupation.”[15] She noted the “widespread and systematic ill-treatment of Palestinian children in the Israeli military detention system,”[16] and urged Minister Freeland to put pressure on the Israeli government to respect the Convention on the Rights of the Child and to ensure Palestinian children’s rights are being respected. [17]

In general, the NDP leadership has shown a willingness to express its concern over Israel’s detainment of Palestinian children. Following demonstrations near the Gaza-Israel border in May 2018, the NDP issued a statement, shared by Jagmeet Singh on his Twitter account, condemning the killings of protesters in Gaza. The statement went on to condemn Israel’s occupation, including Israel’s “arbitrary and abusive detention.”[18]

While the NDP has issued many statements condemning Israel’s mistreatment of Palestinian children, NDP grassroots activists have accused the party of being reluctant to do more than express concern and failure to translate that concern into effective and concrete policy for change. Indeed, after the NDP failed to pass a resolution calling for economic pressure on Israel in February 2018, several NDP members stood on the plenary floor with signs demanding Israel release Palestinian teenager, Ahed Tamimi, from custody.

In general, the Bloc Quebecois’ leadership has consistently proved supportive of efforts to stand against Israel’s violations of human rights. Mario Beaulieu, former Leader of the Bloc Québécois leader, signed onto the Canada-Palestine Friendship Group’s report calling on the government to monitor on the human rights situation of Palestinian children impacted by Israeli military law and practice. Moreover, he was one of three Canadian MPs to convene a press conference on Parliament Hill[19] that highlighted the important takeaways from the Parliamentary trip to Israel-Palestine. During the press conference, he expressed his concerns with the reality on the ground in the West Bank, and raised several human rights issues related to the Israeli military occupation, including the mistreatment of Palestinian children, stating that the situation is “practically apartheid.”[20]

In April 2018, Green Party Leader Elizabeth May participated in the Israel-Palestine trip organized by the Canada-Palestine Parliamentary Friendship Group. Following the trip, in an official press conference, May expressed her concern for the situation of Palestinian children under Israeli military law. She furthermore shared the story of Fawzi al-Junaidi, a 17-year-old Palestinian child who was beaten in Israeli jail for throwing stones, an allegation he has continually denied.[21] Elizabeth May stated that the military courts are unreliable, with a 97% conviction rate of children between 12 and 18 who are jailed in the same prisons as adults. May subsequently signed onto the report calling on the government to monitor the human rights situation of Palestinian children impacted by Israeli military law and practices.

Through social media, Elizabeth May has also voiced her support for initiatives to end the ill-treatment of Palestinian children in Israeli military detention. In April 2018, May also shared on her twitter account a picture of herself with Bassem Tamimi, the father of Ahed Tamimi whom she stated was jailed for slapping a soldier, and declared her support for the NWTTAC campaign.

[10] “Article 37: Torture and deprivation of liberty.” United Nations Convention on the Rights of the Child. 1989. Accessed March 1, 2018. https://www.crin.org/en/home/rights/convention

[15] “Re: Ahed Tamimi and the No Way to Treat A Child campaign’’. Hélène Laverdière. January 22, 2018. Accessed August 1st, 2019. https://helenelaverdiere.ndp.ca/sites/default/files/multisite/173548/field_content_files/laverdiere_to_freeland_-_ahed_tamimi_and_no_way_to_treat_a_child_-_january_2018.pdf

[16] “Re: Ahed Tamimi and the No Way to Treat A Child campaign’’. Hélène Laverdière. January 22, 2018. Accessed August 1st, 2019. https://helenelaverdiere.ndp.ca/sites/default/files/multisite/173548/field_content_files/laverdiere_to_freeland_-_ahed_tamimi_and_no_way_to_treat_a_child_-_january_2018.pdf