CJPME Factsheet 1, published March, 2004 demonstrates the instances wherein Israel defies international Law as stipulated in the Geneva Conventions. The factsheet covers how Israel's establishment of Jewish Colonies (“Settlements”), Home Demolitions and other Collective Punishment, Wanton Killing, Detention and Inhumane Treatment of Civilians, Forcible Transfers and Assaults and Harassment of Medical Units and Personnel are in direct violation of International Law. 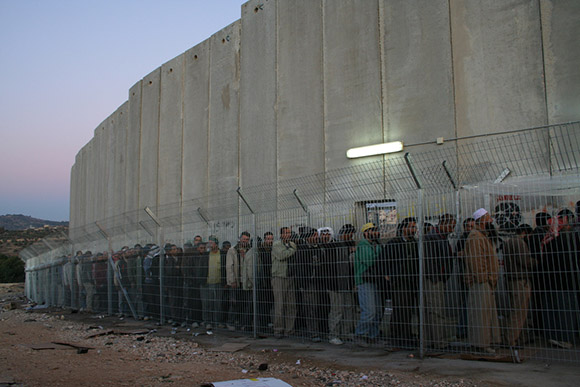 The Geneva Conventions and Occupied Palestine

Factsheet Series No. 1, created: March 2004, Canadians for Justice and Peace in the Middle East
View factsheet in PDF format

There are currently about 400,000 Jewish colonists living in approximately 140 colonies in the West Bank and Gaza.  (This number does not include numerous East Jerusalem neighbourhoods that Israel claimed as part of its own territory in 1967.)  (CBC, Feb. 26, 2004)  During the seven years of the Oslo peace process, the number of Israeli colonizers in the Occupied Territories increased by more than 50 percent.  (AI, Sep. 8, 2003, MDE 15/085/2003)

Article 49, Fourth Geneva Convention: “…The Occupying Power shall not deport or transfer parts of its own civilian population in the territory it occupies.”

With the exception of one Jewish convert, AI is aware of only one Palestinian family living in Israeli settlements in the OccupiedTerritories.  (AI, Sep. 8, 2003, MDE 15/085/2003)  The UN Committee on the Elimination of All Forms of Racial Discrimination in 1998 reiterated its view that “Israeli settlements in the OccupiedPalestinianTerritories are not only illegal under contemporary international law but are an obstacle to peace and to the enjoyment of human rights by the whole population in the region.”

Home Demolitions and other Collective Punishment

According to Amnesty International, “In the past three years [leading up to Oct. 13, 2003], the Israeli Army has destroyed some 4,000 Palestinian homes in the West Bank and Gaza Strip, as well as vast areas of cultivated land, hundreds of factories and other commercial properties, roads and public buildings.”  (MDE 15/091/2003)

Article 33, Fourth Geneva Convention: “No protected person may be punished for an offence he or she has not personally committed.  Collective penalties and likewise all measures of intimidation or of terrorism are prohibited…  Reprisals against protected persons and their property are prohibited.”

Article 53, Fourth Geneva Convention: “Any destruction by the Occupying Power of real or personal property belonging individually or collectively to private persons…  is prohibited, except where such destruction is rendered absolutely necessary by military operations.”

Example: From October 10-12, 2003, more than 100 homes were destroyed in the Rafah area.  Israeli officials justified the destruction due to the search for 3 alleged tunnels used for arms smuggling.  No weapons were reported found.  Israeli officials have not explained why the threat posed by the tunnels could not have been handled by more reasonable means, without endangering civilian lives, and leaving hundreds homeless.  (MDE 15/091/2003)

In the four months between Feb. 27, 2002 and June 30, 2002, the IDF killed nearly 500 Palestinians.  Although many Palestinians died during armed confrontation, many of the killings by the IDF were unlawful, and more than 70 of the victims were children.  Over 8,000 Palestinians were detained in mass round-ups during the same period, and were routinely ill-treated.

Other breaches of international law consisted in the use of Palestinians as “human shields” during IDF military operations; and torture and other cruel, inhuman or degrading treatment of civilians detained.  Some of these violations were so severe as to be considered “grave breaches” of the Fourth Geneva Convention – thus, legally pursuable as war crimes.  (AI, MDE 15/143/2002)

Article 147, Fourth Geneva Convention: “Grave breaches… against persons or property protected by the present Convention [are]: wilful killing, torture or inhuman treatment… unlawful deportation or transfer or unlawful confinement of a protected person...”

Article 49, Fourth Geneva Convention: "Individual or mass forcible transfers, as well as deportations of protected persons from occupied territory to the territory of the Occupying Power or to that of any other country, occupied or not, are prohibited, regardless of their motive."

Article 76, Fourth Geneva Convention: "Protected persons accused of offences shall be detained in the occupied country, and if convicted they shall serve their sentences therein."

Assaults and Harassment of Medical Units and Personnel

Employees and mobile units of the PRCS and ICRC are regularly detained and harassed.  Recent and noteworthy violations include: A PRCS ambulance used as an assault shield by the IDF (Jan. 8, 2004); A tank assault on a PRCS ambulance, shattering the front windshield and injuring the driver (Jan. 28, 2004); During the destruction of the Jenin Refugee Camp in April, 2002, the ICRC was prevented from offering services to the injured and dying for six days.

Article 19, First Geneva Convention: “…Mobile medical units of the Medical Service may in no circumstances be attacked…”

Article 24, First Geneva Convention: “Medical personnel exclusively engaged in the search for, or the collection, transport or treatment of the wounded or sick…  shall be respected and protected in all circumstances…”