CJPME Factsheet 3, published March, 2004 provides an overview of the impact of the Israeli Apartheid Wall--what is the wall, what is it's course, does it really live up to its intention in securing Irsael from terrorist attacks, the Wall's impact on Palestinian life and it's legality. 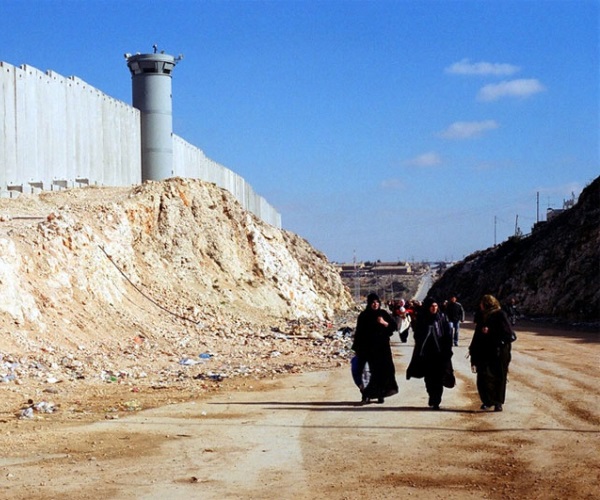 Factsheet Series No. 3, created: March 2009, Canadians for Justice and Peace in the Middle East
View factsheet in PDF format

The wall is composed of two types of structures: 1) For urban areas, a Concrete Wall: Eight meters high, with sniper towers and “buffer zones” 30-100 meters wide for electric fences, trenches, cameras, sensors and military patrolling; and 2) For rural areas, Razor Wire and Fencing: Layers of razor wire on either side of a three meter electric fence, military patrolled roads, sand paths to trace footprints, ditches and surveillance cameras.

Construction of the Wall began in June, 2002, and is not yet completed Whether it is considered a “wall,” “barrier,” or “fence” is irrelevant because the major impacts – confiscation of Palestinian land, forced impoverishment of Palestinian communities, and coercion of Palestinians to abandon their homes and property – remains the same.

What is the Course of “The Wall”

In 1948, UN Resolution 181, which set forth an Israeli and Palestinian state, allocated 43 percent of historic Palestine to the Palestinian state. When fighting between Israel and its Arab neighbours ceased in 1949, the Armistice “Green Line” put only 22 percent of historic Palestine on the eastern (Palestinian) side of the line. Nevertheless, the Wall is not being built on the Green Line, but mostly on Palestinian land and de facto annexing 11.9% of the West Bank.[1]

The projected length of the Wall will be 723 km, more than twice the length of the green line, and will be built 86 percent inside the West Bank.[2]  Given that the Wall is purportedly to divide the West Bank from Israel, one may question how its length could be almost double that of the Green Line.  This is because the Wall plunges into the West Bank again and again to include Israeli colonies (“settlements”), water resources, and agricultural land on the Israeli side of the Wall.

Since the Wall plunges so frequently and deeply into the West Bank, a large number of Palestinians will be stuck between the Wall and the Green Line or surrounded by it. 17 communities, about 27,520 people, are trapped between the Wall and the Green Line (Closed Area) and require permits to live in their own homes. 54 communities are either completely or partially surrounded by the Wall, affecting 247,800 people.[3] As the Israeli information center for human rights, B’Tseelem, notes: “In setting the Barrier's route, Israeli officials almost totally ignored the severe infringement of Palestinian human rights. The route was based on extraneous considerations completely unrelated to the security of Israeli citizens. A major aim in setting the route was de facto annexation of land: when the Barrier is completed, some nine percent of the West Bank, containing 60 settlements, will be situated on the western – the “Israeli” – side.”[4]

Isn’t the Wall intended to Secure Israel against Terror Attacks?

If Israel were truly interested in its security, it would 1) build the Wall on the Israeli side of the border between the two states, 2) abide by international law and withdraw completely from the Palestinian territories it occupied in 1948 and 1967.  How can it serve Israel’s “security” purposes if 27,520 Palestinians are actually walled in on the Israeli side of the Wall (see above)?

It is easier to understand the Wall as a mechanism to consolidate Israel’s occupation, its illegal colonies, and the ongoing colonization of Palestinian land.  The Wall is best understood as an annexation of land.

How does the Wall impact the Palestinians in the West Bank?

The Wall and Israel’s regime of checkpoints and roadblocks means the movement of people and goods has been severely restricted. People have been blocked from important hospital facilities, educational institutions and property, leading to a critical deterioration in standards of living. As noted by the United Nations Office for the Coordination of Humanitarian Affairs: “The Barrier impairs access to key education and health services, and by isolating wells from the land and destroying water networks and cisterns lying in its path, it creates new water and sanitation needs.”[5] The construction of the Wall has also lead to the destruction of agricultural lands and the uprooting of tens of thousands of Palestinian olive and citrus trees. People living in Closed Area communities have complained of harassment and violence at crossing gates. Many households have moved and families have become separated. Relatives have been unable to get the appropriate permits to visit Closed Area communities, and inhabitants of those communities have restricted access to agricultural lands.[6] Colonies, meanwhile, have continued expanding, and “Israeli-only” roads granting colonists free movement have further truncated the West Bank and restricted the travel of Palestinians.

On April 30, 2006 Israel approved a new route for the Wall. Despite the ruling of its own Supreme Court, Israel has not modified the course of the wall in any of the sections that were built and later nullified by Israel’s High Court of Justice. The High Court had nullified three sections of the Wall because the harm caused to Palestinians was disproportionate to Israel’s security needs, and had ordered the wall to be moved.[9]

[9] “Press Release: Israel has not dismantled any section of the Separation Barrier that was nullified by the High Court.” B’Tselem. July 9, 08. http://www.btselem.org/English/Press_Releases/20080709.asp