CJPME Factsheet 4, published April, 2004 provides an overview of Palestinian Home Demolitions, why they happen, what International Law says about them and what similar discrimination exists against Palestinians. 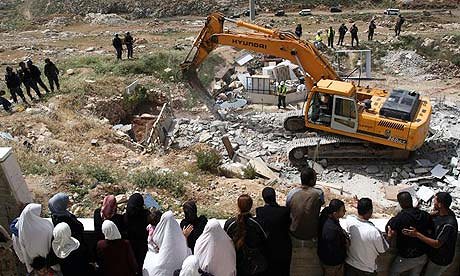 Factsheet Series No. 4, created: April 2004, Canadians for Justice and Peace in the Middle East
View factsheet in PDF format

From 1967, when Israel took control of the West Bank and East Jerusalem, until early 2002, 8000 Palestinian homes were demolished.  While these demolitions (conducted primarily by the Israeli Ministry of the Interior, and the Municipality of Jerusalem) are serious indeed, they are only the tip of the iceberg with respect to the ongoing discrimination against, and marginalization of Palestinians in Israel and the OccupiedTerritories.

Why are Palestinian Homes Demolished

Israel justifies the demolition of Palestinian homes on the basis of improper building approval.  However, the web of laws controlling construction, and the discriminatory application of these laws make it all but impossible for Palestinians to obtain building permits.  In addition, the housing policies currently in place in Israel have created a huge shortage of housing available to Palestinians many areas.  In essence, these laws are another expression of the Occupation, positioned under the guise of “keeping the public order.”

Israeli law requires that official urban development plans be created before any new development can take place.  The government defines the geographic scope of each plan.  For Palestinian neighbourhoods, the plan is drawn tightly around existing development, the government delays approval of the plans, and the cost of developing projects within the plan falls to the Palestinians.  (For the Jewish colonies in East Jerusalem, the government subsidizes the costs of all project development.)  As a result, at this time, only seven percent of East Jerusalem is available to Palestinians for building under approved urban plans, once expropriated lands, and “green areas” (which are often later allocated for development of Jewish colonies like Har Homa), are removed.

Even once urban development plans are approved, the process for individuals to obtain a building permit is time-consuming, expensive, and arbitrary.  For example, a residential building permit application in East Jerusalem can cost $5,000, a prohibitive cost under the depressed economic conditions of most Palestinians.  And although Palestinians make up about 32 percent of the population of Jerusalem, less than 12 percent of building permits issued over the last 35 years have been granted to Palestinian neighbourhoods.

Do Israel’s House Demolition Policies only Apply to Palestinians?


What does International Law say about Israel’s Practices?

The denial of adequate housing and the demolition of Palestinian homes violates international human rights instruments to which Israel is signatory. These include:

The Universal Declaration of Human Rights, which states, "Everyone has the right to a standard of living adequate for the health and well-being of himself and his family, including food, clothing, housing ... " (Article 25.1)

The International Covenant on Economic, Social, and Cultural Rights which "recognize[s] the right of everyone to an adequate standard of living ... including adequate food, clothing, and housing..." (Article 11.1)

The International Convention on the Elimination of All Forms of Racial Discrimination, which obligates State Parties "to ... guarantee the right of everyone, without distinction as to race, color, or national or ethnic origin, to equality before the law ... in particular:... (iii) The right to housing" (Article 5)

Article 33 of the Fourth Geneva Convention, “No protected person may be punished for an offence he or she has not personally committed.  Collective penalties and likewise all measures of intimidation or of terrorism are prohibited…  Reprisals against protected persons and their property are prohibited.”

Article 53 of the Fourth Geneva Convention, which states, “Any destruction by the Occupying Power of real or personal property belonging individually or collectively to private persons, or to the State, or to other public authorities, or to social or co-operative organizations, is prohibited, except where such destruction is rendered absolutely necessary by military operations.”

On November 24, 2001, the UN Committee Against Torture stated that Israel's policy of demolishing Palestinian homes may amount to cruel, inhuman or degrading treatment in breach of Article 16 of the Convention against Torture and Other Cruel, Inhuman, Degrading Treatment or Punishment.

What similar Discrimination against Palestinians Exists?

In addition to the above comparisons, other East-West comparisons highlight the difference in treatment between Palestinian and Jewish Israelis in Jerusalem: