CJPME Factsheet 5, published June, 2004 provides an overview of the Middle East Conflict-- from the beginning of Zionism, the Partition Plan, and the Nakba to the current standstill in Peace Talks. 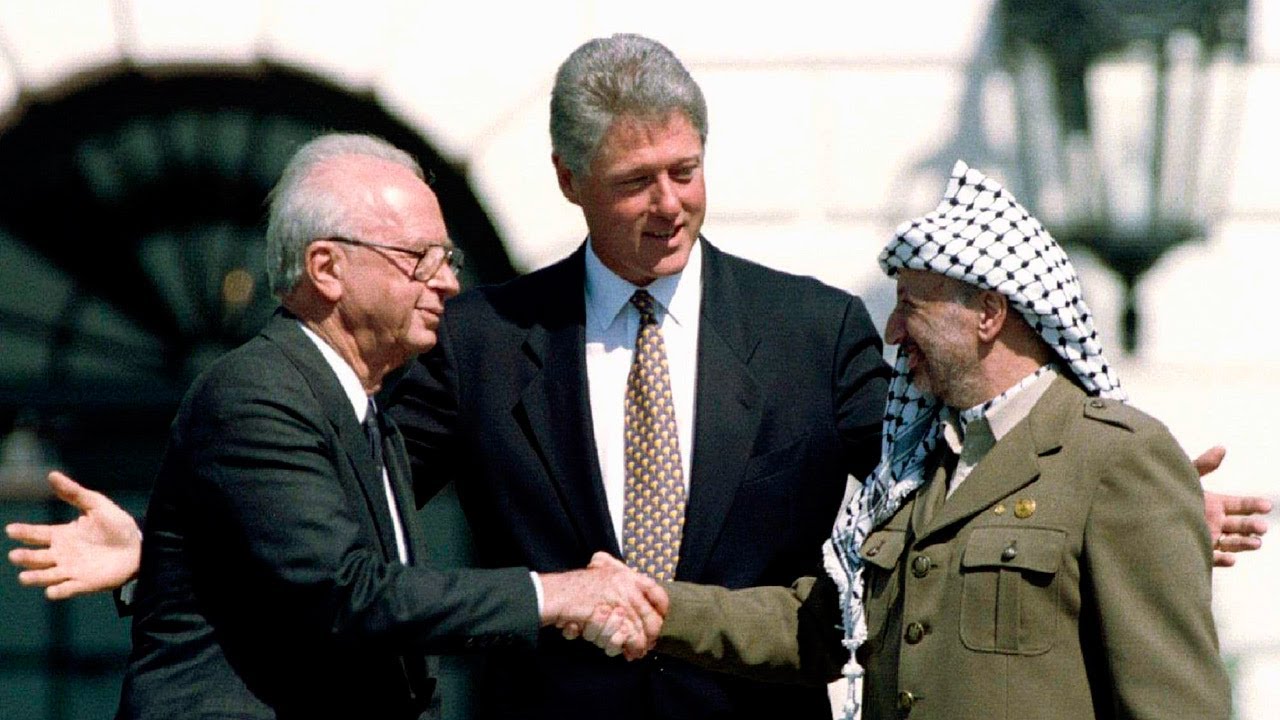 A Brief History of the Palestinian-Israeli Conflict

Factsheet Series No. 005, created: June 2004, Canadians for Justice and Peace in the Middle East
View factsheet in PDF format

How did the Mid-East Conflict Start?

region. It was inevitable that fighting soon broke out between 1) Zionist militias trying to secure a safe haven for Jews from around the world, 2) Palestinians seeking to defend their homeland, and 3) the British who were trying to control their colony, and maintain a sense of balance. Ultimately, due to violent and widespread terrorist activity by both the Jews (e.g. massacre at Deir Yassin village, bombing of the KingDavidHotel, the assassination of Lord Moyne, etc.) and Palestinians, Britain washed its hands of its difficult colony, and turned the Palestinians' fate over to the United Nations.

The United Nations Partition of Palestine

Jerusalem (which, under the UN plan, was to be an "international city") and claimed it as their own. What was left of Palestine – Gaza and the West Bank – was taken by Egypt and Jordan respectively.  It is not surprising that many Palestinians now refer to this 1947 partition as "al-Nakba" – The Disaster.

What happened to the Palestinians after the UN Partition?

After 1948, those Palestinians remaining in Israel (and in parts of the Palestinian homeland seized by Israel) were subjected to martial law and land expropriations for decades following the UN partition plan. Today, 20% of Israel's population is Palestinian – but being non-Jewish, they are treated as second-class citizens in their own land, e.g. substandard housing, education, government services, and legal recourse.  More than four million Palestinians – the original refugees and their descendents – still live in refugee camps in Jordan, Syria, Lebanon, the West Bank and Gaza. To make sure the Palestinian refugees had no homes to return to, Israel assigned their property to Jewish immigrants and destroyed 500 of what it termed "abandoned" Palestinian villages. Today, we would consider this a form of "ethnic cleansing."

Did the Palestinians retain any Rights?

When did Israel occupy the Remainder of the Land?

immediate peace negotiations and the establishment of “a just and durable peace in the Middle East.”  Both Israel and the Palestinians accepted those resolutions.

What is the Status of the Palestinians in the Occupied Territories?

Under the Fourth Geneva Convention, to which Israel is a signatory, the Palestinians in the occupied territories are considered a "protected population" with the right to freedom from: indiscriminate use of force against civilians, wanton destruction of property, torture, collective punishment, the annexation of occupied territory, and the establishment of colonies. Violation of certain of these rights is considered a war crime (according to Articles 146, 147, and 148) and perpetrators of such crimes can be pursued in international tribunals.  However, Amnesty International, along with other international human rights organizations, has documented extensive violation of the war crimes and other articles by Israel over a period spanning decades.  (See Amnesty International’s archives: e.g. MDE 15/027/2002, MDE 02/005/2002, MDE 15/050/2004, MDE 15/050/2003, MDE 15/048/2004, MDE 15/033/2002, MDE 15/083/2001, MDE 15/025/2002, NWS 21/009/2001.)

When did the Palestinians start fighting back?

Palestinian resistance to Israel began in the 1960s, with guerrilla attacks carried out particularly by Al-Fatah, a group led by Yassir Arafat.  International terrorism, aimed at focusing world attention on the grievances of the Palestinians, appeared after the June 1967 War. In 1969, Arafat was elected president of the Palestine Liberation Organization (PLO). From 1970, Palestinian fighters began shelling Israeli towns from Jordan and Lebanon.  Typically, Israel would respond harshly to Palestinian attacks, often sending its air force to bomb refugee camps, targeting the same people that had been dispossessed in 1948.

Why did Israel invade Lebanon in the 1980’s?

In 1982, led by Ariel Sharon (Israel's prime minister from 2001 to the present), Israel invaded Lebanon with the stated aim of "eliminating Palestinian terrorism."  While the attack did strike a heavy blow to Palestinian positions in southern Lebanon, it went well beyond PLO bases – eventually leading to the occupation of Beirut, and the many Palestinian refugee camps that had been established there in 1948 and 1967.  Under Sharon’s authority, a local Lebanese Phalangist militia was engaged to root out PLO fighters alleged to be present in the Sabra and Shatila Palestinian refugee camps in Beirut.  During the night of September 16, 1982, the Phalangist militia did not discover any PLO fighters, but instead slaughtered at least 800 unarmed civilians in these two camps.  At the time of the massacre, the perimeter of the camps was secured by the Israeli Army (IDF), and the IDF turned back all fleeing Palestinians.

Following the massacre, the Israeli government launched a Commission of Inquiry led by Israeli Supreme Justice Kahan.  In the report, published in the Spring of 1983, the Commission stated that there was no evidence that Israeli units took part in the massacre directly, but that it was solely due to the Phalangists. However, the Commission recorded that Israeli military personnel had several times become aware that a massacre was in progress without taking serious steps to stop it, and even that a report of a massacre in progress was made to an Israeli cabinet minister. It recommended that Israel's Defense Minister Ariel Sharon resign or be fired and also censured a number of military and intelligence officers.

After 1967, thousands of Jewish "settlers" had begun establishing colonies in East Jerusalem and throughout Gaza and the West Bank, in open violation of the Geneva Conventions. Colonization gave Israel the excuse of continuing its military occupation to "protect the settlers."  In 1980, in defiance of the UN Security Council, it declared East Jerusalem to be a part of Israel, and entrenched its efforts to colonize East Jerusalem and its suburbs.  In the decades that followed – and even while it was promising the Palestinians "land for peace" – Israel expanded its program of illegal colonization in the occupied territories. Today, 236,000 Israeli "settlers" live on land across the West Bank and Gaza Strip that was confiscated from Palestinians, while another 200,000 have occupied East Jerusalem – in defiance of UN resolutions and international law.  These "Jewish pioneers" see the Palestinian homeland as part of the "biblical land of Israel" – theirs for the taking.

Didn’t Israel make Arafat a Generous Offer in 2000 that he Refused?

While Israel claimed that the offer was generous, it was a proposal based on a power relationship where Israel decided it should dictate all terms, and tell the Palestinians they were being generous.  Israel offered to "give back" 87% of the occupied territories – which would have constituted about 20 percent of historic Palestine.  In return, the Palestinians would first need to give up their “right of return.” Second, though in geographic terms, the territorial concessions of Israel seemed tempting, Israel would have managed the proposed Palestinian state like a prison, controlling Palestine's borders, airspace and water supply, much as a prison warden controls the gates, cells, food and services of a prison.  In addition, prime land that Israel had seized for large Jewish settlements – especially around Jerusalem – would become part of Israel. In a move that few Palestinians questioned, Arafat chose not to relinquish his people’s birthright for this unseemly offer.

Doesn’t Israel currently have a Plan to Withdraw from the Settlements?

Israel is building a barrier up to 25 feet high – complete with electrified fencing, concrete walls, ditches and barbed wire – supposedly to protect Israel from terrorist attacks.  Most of the wall will cut deep into the occupied territories, incorporating into Israel 80% of its illegal settlements and up to 40% of the Palestinian homeland, including fertile farmland and sources of water for Israeli agriculture. It will turn Palestinian farms, villages and cities into virtual prisons. The "Annexation wall" is a new step in the ongoing dispossession of the Palestinians.