CJPME Factsheet 7, published July, 2004: This Factsheet Provides demographic information of Historical Palestine prior to 1948 in an effort to tell the often erased story of Palestine's indigenous people. The Zionist Movement has long called Palestine “A land without a people, for a people without a land,” a slogan that galvanised Jews to move to Palestine and eventually led to the large-scale displacement of indigenous Palestinians. 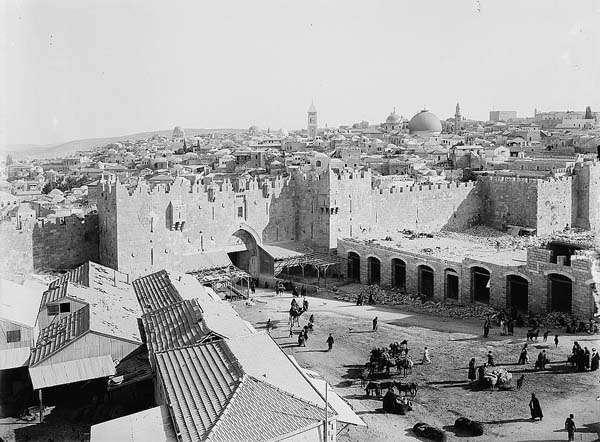 Demographics of Historic Palestine prior to 1948

Factsheet Series No. 7, updated: June 2022, Canadians for Justice and Peace in the Middle East

Ever since the founding of the Zionist movement,[1] supporters of Zionism have downplayed the fact that historic Palestine had always had a healthy indigenous population.  As early as the 19th and early 20th century,[2] Zionists and their supporters repeated the myth widely: “A land without a people, for a people without a land.”  While this slogan encouraged Jewish emigration to historic Palestine, it also paved the way for one of the largest dispossessions of an ethnic group in modern history.  Both the demographic statistics themselves, as well as the history of Jewish emigration to Palestine in the 1930s tell an entirely different story.

Demographics of Palestine under the Ottomans

Modern Zionism was a movement born in Europe in the 19th century, but the Ottoman Empire controlled historic Palestine during the 19th and early 20th centuries.  Starting in the 19th century, a number of disparate Jewish groups in Europe had begun cooperating to begin modest agricultural settlement in historic Palestine.  These and other groups first came together formally in 1897 for the first Zionist Conference in Basel, Switzerland.[3]

The population of Ottoman “Palestine” is difficult to estimate because:

1) There was no administrative district of Palestine. Ottoman census figures were for various districts, e.g. the Jerusalem, Acco and Nablus districts. The Acre district included areas in Lebanon, outside the borders of historic Palestine;

2) Both Arabs and Jews avoided the Turkish census for three reasons: a) to avoid taxes, b) to avoid military conscription, and c) to avoid questions of illegal residence;

3) The census figures didn’t include Bedouins (likely numbering over 100,000[4]) and foreign subjects (i.e. individuals with foreign citizenship, without Ottoman residency status) of which there were about 10,000 Jews.

Nevertheless, the Ottoman census of 1878 indicated the following demographics for the Jerusalem, Nablus, and Acre districts:[5]

Jewish emigration to historic Palestine grew over the first decades of the 20th century, especially during the 1930s.  As the Jewish population in Palestine increased, the indigenous Arab population put pressure on the British government to control the immigration.  Thus, in the 1920s, the British restricted Jewish immigration by fixing quotas and authorizing certain Jewish organizations to distribute immigration certificates as they saw fit.  Nevertheless, with increased persecution of Jews in Europe, many Jews were not willing to wait years for immigration certificates.  Thus, in 1934, the Vallos became the first chartered immigration ship to arrive in Palestine, carrying 350 Jews.  By the time WWII had begun, tens of thousands of Jewish immigrants had arrived illegally in Palestine by ship.  This illegal shipping of immigrants continued well into the 1940s.  While the British intercepted some of the ships, almost all of the immigrants were eventually able to settle in Palestine.[6]

The Jewish community found other ways to emigrate to Palestine, exploiting loopholes in the Mandatory government’s immigration regulations.  Students were not required to have immigration certificates to study in Palestine, so many enrolled at the Hebrew University of Jerusalem, and then remained in the country.  Young women entered the country claiming fictitious marriages to Palestinian residents.  Others arrived as tourists, and never returned to their former countries.  In 1935 alone, almost 5,000 Jews entered the county illegally through these various means.[7]

In 1939, concerned with the rising tensions in Palestine due to the massive Jewish immigration – both legal and illegal – the British government issued Parliamentary Document 6019 (a.k.a the White Paper of 1939), slated to limit the Jewish population in Palestine to no more than one third the total.  If economic capacity permitted, 75,000 Jews would be allowed to come to Palestine, after which “no further Jewish immigration will be permitted unless the Arabs are prepared to acquiesce to it.”[8]

Emigration Statistics to Historic Palestine during the British Mandate

The below are British estimates of the emigration to historic Palestine between 1920 and 1945, including people who entered as tourists and subsequently registered as immigrants. Most figures as of Dec. 31 of each year.

Population Statistics of Historic Palestine during the British Mandate

The below estimates are based on the reports of the British Mandate for Palestine and the Mandatory censuses, conducted only in 1922 and 1931. All figures following 1931 are estimates; most figures as of Dec. 31 of each year.

[2] MacDonald, Robert L. "'A land without a people for a people with a land': Civilizing mission and American support for Zionism, 1880s-1929," Ph.D. Dissertation, Submitted to the Graduate College of Bowling Green State University, December, 2012, accessed June 10, 2022 at https://etd.ohiolink.edu/apexprod/rws_etd/send_file/send?accession=bgsu1352321143&disposition=inline