CJPME Factsheet 13, published March, 2006: This Factsheet provides information on both Hamas and Israel's stances on acknowledging the existence of both Israel and Palestine. The International Community is aware that Hamas is ideologically opposed to the existence of Israel but very few speak about Israel's ideological opposition to the state of Palestine. The Factsheet delves into the double standard wherein Israel is consistently recognised by the international community and Palestinians while Palestine goes unrecognised and Israeli leaders go unpunished for their reluctance to acknowledge Palestine. It also looks at how Israel's continuous, illegal expansion plays into Hamas'  reluctance to acknowledge Israel. 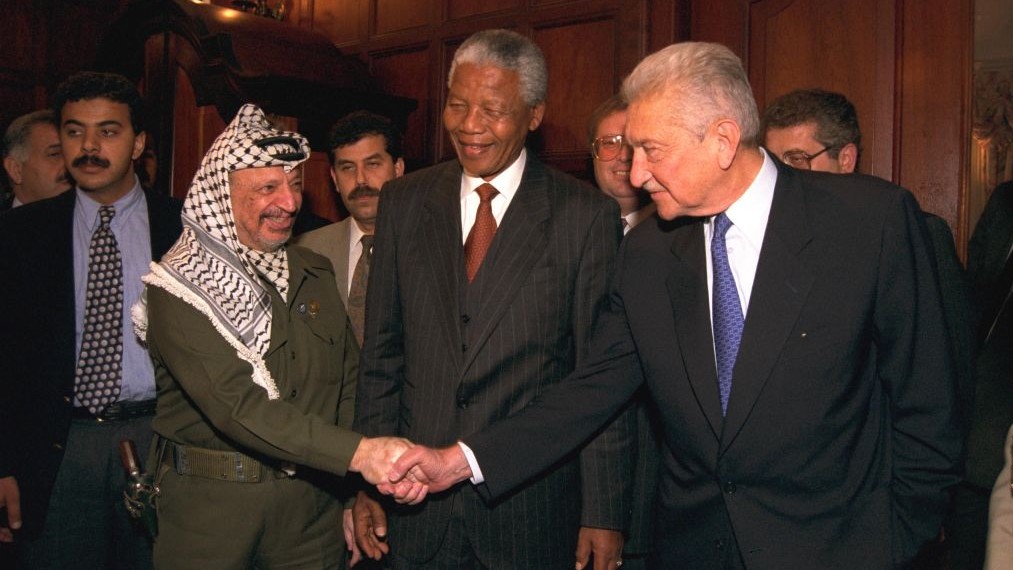 Mutual Recognition between Israel and Palestine

Factsheet Series No. 13, created: April 2006, Canadians for Justice and Peace in the Middle East
View factsheet in PDF format

With the Hamas election victory of January 25, 2006, there are many questions about Hamas’ positions with respect to Israel, previous diplomatic agreements, and the potential for violence.  While many people in the international community are aware that, according to its 1988 charter, Hamas is ideologically opposed to the existence of the state of Israel, very few realize that Israel is ideologically opposed to the existence of a state of Palestine.  The international community must pressure both peoples – Israeli and Palestinian – to recognise the right of self-determination that each must enjoy.

Wasn’t there “Mutual Recognition” with Oslo in 1993?

The signing of the historic Oslo Accords in 1993 was, at the time, an auspicious event which involved an asymmetrical recognition between the Israelis and the Palestinians.  Whereas PLO Chairman Arafat wrote, “The PLO recognizes the right of the State of Israel to exist in peace and security,” Israel’s Prime Minister Rabin made a much different acknowledgement.  Rabin wrote, “…in light of the PLO commitments included in your letter, the Government of Israel has decided to recognize the PLO as the representative of the Palestinian people and commence negotiations with the PLO…”

While the right of Israel to exist is recognized in Oslo’s Declaration of Principles (DOP), the phrase “Palestinian State” (or equivalent formulations) occurs neither in the DOP of 1993, nor in the Interim Agreement of 1995.  Article 1 of the DOP simply states, “The aim of the Israeli-Palestinian negotiations within the current Middle East peace process is, among other things, to establish a Palestinian Interim Self-Government Authority, the elected Council (the "Council"), for the Palestinian people in the West Bank and the Gaza Strip, for a transitional period not exceeding five years, leading to a permanent settlement based on SC Resolutions 242 and 338…

It is interesting to note that Sharon’s government coalition in Israel’s 16th Knesset included political parties radically opposed to the existence of a Palestinian state.  Mafdal’s position is that there will be only one state between the Jordan River and the Mediterranean Sea – the State of Israel. Even more extreme, Moledet openly advocates the “transfer” – whether voluntary or forcible – of Palestinians from historic Palestine.

What are Israel’s Borders?

When questioned on Jan. 29, 2006, about whether Hamas would recognize Israel, CNN reported that Mahmoud al-Zahar responded saying, “Until Israel says what its final borders will be, Hamas will not say whether it will ever recognize Israel…  ‘If Israel is ready to tell the people what is the official border, after that we are going to answer this question.’”  Indeed, based on Israeli ongoing occupation policies (e.g. colonization of occupied Palestinian territory), and maps provided by its Ministry of Foreign Affairs, Israel does not acknowledge any distinction between Israel and Palestine (or PalestinianTerritories.)

The international community – including Canada – considers Gaza and the West Bank as occupied (under terms of international law.)  These regions are shown in Map 1 below, represented by the Israeli foreign ministry as the “pre-1967” Palestinian territories.  Israel’s Map 2 below suggests no expectation or allocation for an eventual Palestinian State – Israel is shown as bordering in the south-east only with Jordan.  The map makes no distinction between territory allocated to it by UNGA Resolution 181 (1947) creating the State of Israel; territory occupied in the 1948 war; territory occupied in the 1967 war (except Sinai); and the area of East Jerusalem and the Golan, illegally but formally annexed by Israel in 1967.

On January 26, 2004, senior Hamas official Abdel Aziz al-Rantissi offered a 10-year cease-fire, in return for a complete withdrawal by Israel from Palestinian territories captured in the 1967 war, and the establishment of a Palestinian state. Hamas leader Sheikh Ahmed Yassin stated that the group could

Under what conditions can a Country acquire new Territory?

While there is disagreement as to who initiated the wars of 1948 and 1967, the acquisition of territory by force is strictly illegal under international law.

The UN Charter, requires (Art. 2) that all countries “settle their international disputes by peaceful means” and “refrain in their international relations from the threat or use of force against the territorial integrity or political independence of any state.”  UNSC Resolution 242 (1967) reminded Israel of its obligation under the UN charter to relinquish territory it had occupied, citing the “inadmissibility of the acquisition of territory by war” and the fact that “the fulfillment of [UN] Charter principles requires the establishment of a just and lasting peace in the Middle East which should include… Withdrawal of Israeli armed forces from territories occupied in the recent conflict…”

What are the International demands on the new Israeli government?

Presently, the new Israeli government is under no pressure by the International Community to recognize the existence of a Palestinian state, or to adapt any of its current policy positions.  This is surprising given that 1) the party forming the Israeli government – Kadima – ran on a platform of unilateral “disengagement” – in violation of international law, 2) with continued construction of the Wall as proposed by Kadima, Israel continues to violate international law, the 2004 ICJ decision, and associated UN resolutions, and 3) with its unilateral agenda, Kadima is set to violate existing treaties and peace agreements.  (e.g. Under Oslo, the Israelis committed to preserving the integrity of the West Bank and Gaza as territorial units.)

References: Major portions of this factsheet taken from Rachad Antonius’ “The Relevance of Principles of International Law to the Israeli-Palestinian Conflict,” March, 2003.  See also, “A Just Peace or No Peace,” Ismail Haniyeh, March 31, 2006, The Guardian; “Hamas Reiterates Peace Terms,” Aljazeera, February 13, 2006;  “Hamas Leader sets Conditions for Truce,” CNN.com, January 29, 2006.  For Map 1, refer to http://www.mfa.gov.il/mfa/go.asp?MFAH0dsp0.  For Map 2, refer to http://www.mfa.gov.il/mfa/go.asp?MFAH0dsw0.  Please refer to appropriate documents for all UN and diplomatic references.