CJPME Factsheet 19, published January, 2007: Palestine: Peace not Apartheid (Simon and Schuster, 2006), the bestseller by former US President Jimmy Carter has generated a wide variety of reactions, primarily because of its focus on Israel’s refusal to respect international law in its occupation of the Palestinian territories.  In the course of the book’s approximately 250 pages, Carter details Israel’s activities in the occupied Palestinian territories, and how they form the primary obstacle to peace in the region.

Factsheet Series No. 19, created: January 2007, Canadians for Justice and Peace in the Middle East
View factsheet in PDF format 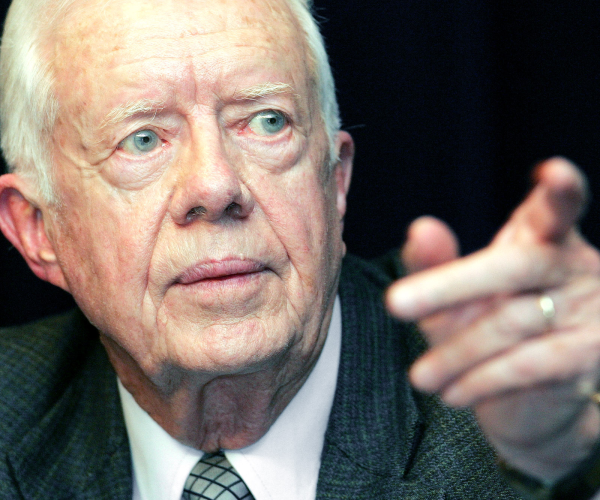 Palestine: Peace not Apartheid (Simon and Schuster, 2006), the bestseller by former US President Jimmy Carter has generated a wide variety of reactions, primarily because of its focus on Israel’s refusal to respect international law in its occupation of the Palestinian territories.  In the course of the book’s approximately 250 pages, Carter details Israel’s activities in the occupied Palestinian territories, and how they form the primary obstacle to peace in the region.

Is Carter qualified to write on the current situation in Israel/Palestine?

Jimmy Carter, President of the United States from 1977 through 1981 was integral to the Camp David peace accords of 1978, which established a peace between Israel and Egypt which endures to this day.  In addition to working closely with Menachim Begin of Israel, and Anwar Sadat of Egypt during the Camp David Accords, Carter has had a relationship with dozens of other leaders in the Middle East, including Ariel Sharon, Ehud Olmert, Yassir Arafat, King Hussein, Hafez Assad, Golda Meir and many others.  He visited Israel and the occupied Palestinian territories prior to his presidency, during his presidency, and innumerable times since his presidency.  Most recently, he helped to oversee fair and honest elections conducted by the Palestinian Authority in 2006, 2005 and earlier in the 1990s.

What are the book’s key points?

How does Carter justify using the term “Apartheid” in his book?

Speaking of a 1996 visit to the occupied Palestinian territories, Carter described the degree of apartheid that existed even back then:

Israeli [colonies] permeated the occupied territories, and highways connecting the [colonies] with one another and with Jerusalem were being built rapidly, with Palestinians prohibited from using or crossing some of the key roads.  In addition, more than one hundred permanent Israeli checkpoints obstructed the routes still open to Palestinian traffic, either pedestrian or vehicular.[1]

What conclusions does Carter draw?

In his final chapter, Carter describes his own perspective on the obstacles to peace in Israel/Palestine:

Israel’s continued control and colonization of Palestinian land have been the primary obstacles to a comprehensive peace agreement in the Holy Land.  In order to perpetuate the occupation, Israeli forces have deprived their unwilling subjects of basic human rights.  No objective person could personally observe existing conditions in the West Bank and dispute these statements. [2]

Carter continues by criticizing the US for its acquiescence toward Israel, noting that the US has used its veto in the UN Security Council 40 times to prevent the passage of resolutions critical of Israeli policy.  According to Carter, the best option for peace is a two-state solution, Israel/Palestine existing side-by-side in peace, along the pre-1967 borders.

What have been the reactions to Palestine: Peace not Apartheid?

Conservative Jewish organizations (e.g. ADL, CAMERA, etc.) and individuals (e.g. Alan Dershowitz[3], David Makovsky[4], etc.) have attacked Carter and his “apartheid” characterization, but have not countered Carter’s description of conditions within the Palestinian territories.  The most detailed critique came from Ken Stein, professor of Modern Israel at Emory University.  Stein’s strongest criticism[5] related to how Carter interprets the obligations on Israel under UN Resolution 242, and Carter’s own Camp David Peace Accords.  On the other hand, other Jewish organizations and individuals (e.g. Michael Lerner[6], Henry Siegman[7], etc.) have praised the book for its honesty.  Lerner writes, “Jimmy Carter is speaking the truth as he knows it, and doing a great service to the Jews.”

Proponents of justice in the Middle East take issue with Carter’s charitable characterization of conditions for Palestinians within Israel.  Carter suggests that Israel treats all its citizens – Palestinian and Jewish – equally.  Numerous human rights reports have documented systemic and grievous discrimination against Palestinians within Israeli society[8].  On the other hand, few individuals of Carter’s stature have been so direct, specific and comprehensive in their criticism of Israeli policies.  Ultimately, the transparent dialog that Carter attempts to promote through his book can only help the cause of peace in the Middle East.

[8] Although many studies and reports exist, Uri Davis’ 2003 Apartheid Israel: Possibilities for the Struggle Within provides an excellent summary of the institutions of Israeli Apartheid.