Factsheet Series No. 20, created: January 2007, Canadians for Justice and Peace in the Middle East
View factsheet in PDF format 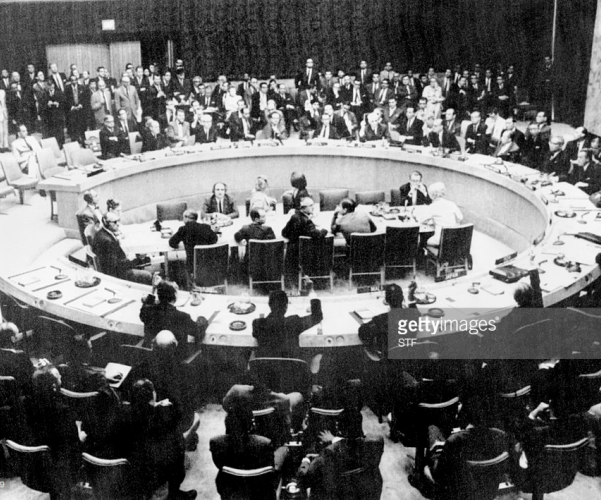 What does Resolution 242 Say?

Resolution 242 is less than 350 words and fits on a single sheet of paper – one-sided.  UN resolutions, 242 included, are generally formulated in two sections.   The “preamble” states the concerns and principles of the resolution, and the “prayer” specifies the decision taken.  242’s preamble begins “…Emphasizing the inadmissibility of the acquisition of territory by war” and citing next UN member states’ commitment to uphold Article 2 of the UN Charter.  (Article 2 of the UN Charter entrenches member states’ rights to territorial integrity (see below.))  242’s prayer “Affirms that the fulfilment of [UN] Charter principles requires the establishment of a just and lasting peace in the Middle East which should include the application of both the following principles: (i) Withdrawal of Israel armed forces from territories occupied in the recent conflict; (ii) Termination of all claims or states of belligerency and respect for and acknowledgment of the sovereignty, territorial integrity and political independence of every State in the area…”

In sum, Resolution 242 states Israel must withdraw from the territory it occupied earlier in 1967.

Is a country allowed to keep territory it occupied in a defensive war?

No.  Article 2 of the UN Charter makes this very clear: “All Members shall settle their international disputes by peaceful means in such a manner that international peace and security, and justice, are not endangered.”  Even more significantly, the next paragraph reads: “All [UN] Members shall refrain in their international relations from the threat or use of force against the territorial integrity or political independence of any state, or in any other manner inconsistent with the Purposes of the United Nations.”

In its ruling on Israel’s Wall in 2004, the International Court of Justice (ICJ) repeatedly affirmed[2] the inadmissibility of territorial conquest, emphasizing, “No territorial acquisition resulting from the threat or use of force shall be recognized as legal.” [3]  The Court also averred that this principle reflected customary international law, as previously asserted in a 1986 ICJ case between Nicaragua and the United States.

Thus, even were there consensus[4] that the war in 1967 had been a “defensive war” from Israel’s standpoint, UN Charter principles and customary international law prohibit Israel from continuing to hold territory occupied during that war.

Must Israel withdraw from “all” territory it occupied?

As context to this discussion, readers may be aware that some Israelis claim that because 242’s wording says, “Withdrawal of Israel armed forces from territories occupied in the recent conflict” and not “the territories,” that the resolution never intended for Israel to relinquish all lands it occupied in 1967.  This is a false claim that will be addressed from a number of angles.

First, a plain reading of the English text would not suggest this, especially with the preamble cited above specifying the “inadmissibility of the acquisition of territory by war.”  Second, if somehow 242 allowed latitude on this question, it’s curious that the UN Security Council was not specific on where strict adherence was or was not required.  Or, alternatively, what territories was the Security Council referring to, if not to all of them?  Thirdly, the text in French does not leave any such loophole.  The parallel text in French reads: “Retrait des forces armées israéliennes des territoires occupés lors du récent conflit;” (italics added) thus literally, “from the territories…”

In addition to the straightforward arguments above, there are innumerable historical references which indicate that a complete Israeli withdrawal from all territories was requested and expected with Resolution 242:

How would Israel benefit by adherence to Resolution 242?

Resolution 242 is Israel’s ticket to peace, if it is willing to use it.  In the 2002 Beirut Summit, in exchange for Israeli withdrawal from all territories occupied in 1967 (i.e. respect for Resolution 242) the Arab League offered to “a. Consider the Arab-Israeli conflict ended, and enter into a peace agreement with Israel, and provide security for all the states of the region,” and “b. Establish normal relations with Israel in the context of this comprehensive peace.”  Also, since at least 2004[9], leaders of Hamas have also clearly stated that Israeli withdrawal to the pre-1967 borders would be the trigger to abandonment of the use of violence and recognition of Israel by Hamas.


[1] While some may argue that Israel withdrew from Gaza in 2005, this does not stand up to legal scrutiny.  Notably, by controlling Gaza’s airspace, coastline, electromagnetic spectrum and borders, and reserving the right to attack and re-invade at will, Israel still effectively occupies Gaza.  See “IHL Implications of an Israeli Withdrawal from Gaza,” The Program on Humanitarian Policy and Conflict Research, HarvardUniversity, May, 2004

[4] While not central to the focus of this factsheet, it is important to note that many modern Israeli historians confirm Arab allegations that Israel started the war in 1967, e.g. see Righteous Victims, Morris, Benny, 1990, p. 313.

[6] John McHugo, "Resolution 242: A Legal Reappraisal of the Right-Wing Israeli Interpretation of the Withdrawal Phrase With Reference to the Conflict Between Israel and the Palestinians," International and Comparative Law Quarterly (October 2002), pp. 866-872.

[9] Hamas leader Abdel Aziz al-Rantissi was one of the first Hamas leaders to articulate this position, doing so on January 6, 2004.  Current leaders Ismail Haniyeh and Khalid Mashaal have also stated their willingness to make peace and recognize Israel based on the 1967 borders.