CJPME Factsheet 22, published February, 2007: Few Canadians are aware that Canada has a unique responsibility to the Palestinian refugees.  Since 1995 Canada has chaired the Refugee Working Group of the Middle East Multilateral Peace Process, which is charged with “improving the current living conditions of refugees and displaced persons without prejudice to their rights and future status.” Tragically, the committee has not met for several years, yet the need to improve the refugees’ living conditions of refugees has never been greater.

Factsheet Series No. 22, created: February 2007, Canadians for Justice and Peace in the Middle East
View factsheet in PDF format 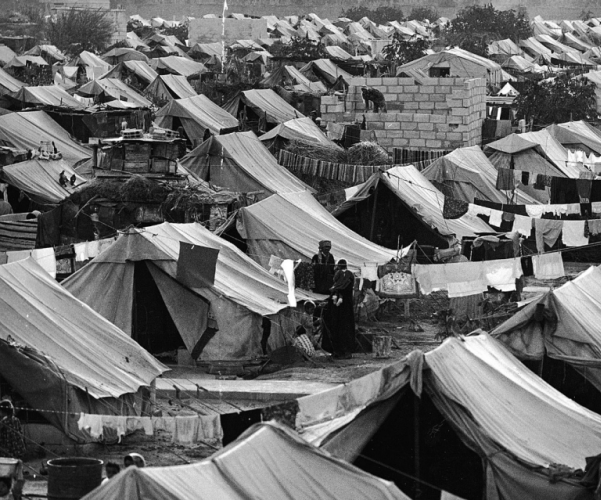 Few Canadians are aware that Canada has a unique responsibility to the Palestinian refugees.  Since 1995 Canada has chaired the Refugee Working Group of the Middle East Multilateral Peace Process, which is charged with “improving the current living conditions of refugees and displaced persons without prejudice to their rights and future status.” [1]  Tragically, the committee has not met for several years[2], yet the need to improve the refugees’ living conditions of refugees has never been greater.

Who are the Palestinian Refugees?

The United Nations Relief and Works Agency (UNRWA) defines a Palestinian refugee as any person whose “normal place of residence was Palestine during the period 1 June 1946 to 15 May 1948 and who lost both home and means of livelihood as a result of the 1948 conflict.”  Palestinian refugees eligible for UNRWA assistance are mainly persons who fulfill the above definition and/or descendants of fathers fulfilling the definition. [3]

How did so many Palestinians become Refugees?

The first exodus of Palestinians from their homes began with the UN’s November 29, 1947 resolution that partitioned Palestine into two states, and continued until late 1949.  Jewish terrorism, including massacres and attacks on Palestinian villages, conducted by militant organizations (e.g. the Irgun, the Lehi, etc.) was the most important factor in inducing large numbers to flee their homes. [4],[5] After May 14, 1948 when the British Mandate ended, Israel declared itself specifically as a “Jewish… state” and forcible evictions increased, especially in the region of modern-day Tel Aviv.  Literally hundreds of Palestinian villages were depopulated and destroyed by the Israeli Army. [6]

By late 1949, approximately 90 percent of the Palestinian population of the new state of Israel had fled into Gaza and the West Bank, or into neighbouring Lebanon, Syria, Jordan and Egypt.  Between 700 thousand and 1 million Palestinians became refugees during this period. [7]

Unfortunately, the dispossession of Palestinians from their land did not cease with the events of 1948.  Between 1949 and 1952, forty more villages were depopulated, the inhabitants (new “Israeli citizens”) becoming refugees within Israel itself. [8] Their lands and property were confiscated under Israel’s Absentee Property Law.  Then again, in 1967, a third wave of refugees was created when Israel invaded and occupied the West Bank and Gaza Strip, causing around 300,000 Palestinians to flee to Jordan, Syria, Egypt and elsewhere. Of these, 180,000 are believed to have been new refugees. [9]

How many refugees are there, and where do they live?

Why are Palestinians still refugees after nearly 60 years?

Simply put, the refugees remain refugees because no country wants them. Israel, which defines itself as a Jewish state, has steadfastly refused to allow the vast majority of the refugees – non-Jews – to return.

As stated in CJPME’s factsheet “The ‘Right of Return’ for Palestinians”: “Israel has violated the Articles on Nationality of Natural Persons in Relation to the Succession of State by drafting its 1952 Nationality Law for ‘non-Jews’ in such a way as to effectively denationalize Palestinian refugees, while allowing Jews from anywhere in the world to acquire ‘nationality’ status through the much more generous terms of Israel’s Law of Return for Jews.  In addition, Israel failed to allow Palestinian refugees to re-enter Israel – the new sovereign over their former home – thereby denying them the basic opportunity to be heard in a court of law to challenge the legality – particularly under international law – of Israel’s 1952 Nationality Law.”

No official organization is responsible for defending the right of the Palestinians to return to their homes.

Palestinian refugees are specifically excluded from the 1951 (Geneva) Convention Relating to the Status of Refugees, which established refugees’ basic rights such as employment, travel documents and naturalization, among others.  UNRWA’s mandate was defined to “direct relief and works programmes for the Palestinian refugees,” and not to advocate for their civil rights.  By contrast, all other refugees come under the UN High Commissioner for Refugees (UNHCR), whose mandate is to safeguard the rights and well-being of refugees. [12] As a result, Palestinians are deprived of some of the protections afforded to other refugees.

According to UNRWA, “One reason for the distinction is that in the main the UNHCR is mandated to offer refugees three options, namely local integration and resettlement in third countries or return to their home country – options which must be accepted voluntarily by refugees under UNHCR’s care. These are not feasible for Palestine refugees as the first two options are unacceptable to the refugees and their host countries and the third is rejected by Israel. Given this context, the international community, through the General Assembly of the United Nations, requires UNRWA to continue to provide humanitarian assistance pending a political solution.” [13]

What are the rights of the refugees under international law?

International human rights law should normally provide legal recourse to Palestinians, under a number of provisions.  For example, the Universal Declaration of Human Rights, Art. 13 (2) states, “Everyone has the right to leave any country, including his own, and to return to his country.”  Art. 15 of this same instrument also states, “Everyone has the right to a nationality.  No one shall be arbitrarily deprived of his nationality nor denied the right to change his nationality.”  Other instruments of international law also enshrine the right of all peoples to self-determination and the right of return. [14]

In addition to the above legal protections, specifically for Palestinian refugees, the UN General Assembly affirmed in Resolution 194 (1948) that the “refugees wishing to return to their homes and live at peace with their neighbours should be permitted to do so at the earliest practicable date, and that compensation should be paid for the property of those choosing not to return…” [15]


[1] Officially, the Refugee Working Group is charged with “improving the current living conditions of refugees and displaced persons without prejudice to their rights and future status; easing and extending access to family reunifications; and supporting the process of achieving a viable and comprehensive solution to the refugee issue.”

[7] For a conservative, but highly credible estimate of 726,000, see “Final Report of the United Nations Economic Survey Mission for the Middle East published by the United Nations Conciliation Commission,” December 28, 1949. (A/AC.25/6/Part.1 p. 21)

[13] See UNRWA’s description and defence of its mandate and options at http://www.un.org/unrwa/allegations/index.html