CJPME Factsheet 24, published April, 2007: While settlement of the millions of Palestinian refugees has been at the forefront of international consciousness for the past 60 years, a vigorous six year campaign by Justice for Jews from Arab Countries (JJAC) has been mounted to raise the profile of the Jewish refugee issue (i.e. Jews displaced from Arab countries – e.g. Iraq, Egypt, etc. – during the late 1940s and following.)  It is important to understand why this campaign has been launched now, and how such claims should be viewed.

Emergence of the Jewish Refugee Question

Factsheet Series No. 24, created: April 2007, Canadians for Justice and Peace in the Middle East
View factsheet in PDF format 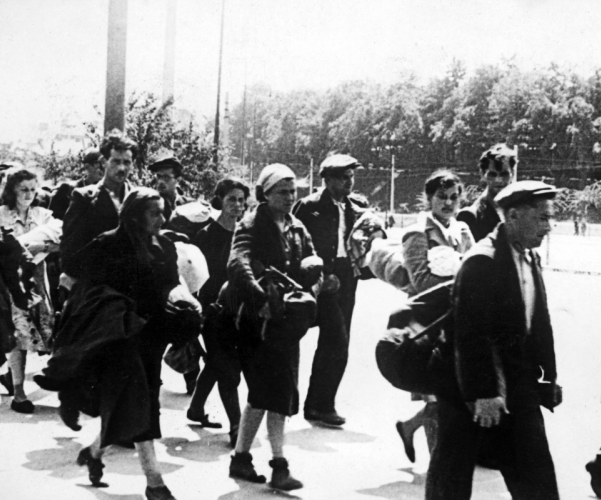 While settlement of the millions of Palestinian refugees has been at the forefront of international consciousness for the past 60 years, a vigorous six year campaign by Justice for Jews from Arab Countries (JJAC) has been mounted to raise the profile of the Jewish refugee issue (i.e. Jews displaced from Arab countries – e.g. Iraq, Egypt, etc. – during the late 1940s and following.)  It is important to understand why this campaign has been launched now, and how such claims should be viewed.

Did Israel press for recognition of Jewish refugees after the 1948 war?

Although Israel raised the issue in the UN’s 1949-50 conciliation negotiations between Israel and Arab states, it apparently did so within a very narrow frame of reference. In the UN’s 24,465-word conciliation report, the phrase “Jewish refugee” appears just once, in a 37-word passage, the salient part of which reads: “…[financial] assistance would be extended to include the resettlement of Jewish refugees from the Arab-controlled areas of Palestine.”[1] No reference was made anywhere else in the report to Jewish refugees from other Arab states. Moreover, even within the narrow context of Jewish refugees from Arab-controlled areas of Palestine, the Israeli government “was not prepared to negotiate on any point separately and outside the framework of a general settlement.” Whether intentional or not, Israel effectively forestalled resolution of the “refugee problem” for both sides. As an aside, the term ‘refugee(s)’ appears 244 times in the report, and in all but the one instance cited above, the term appears to refer to Arab or Palestinian refugees.

What triggered recent interest in Jewish refugees from Arab states?

At the Camp David II summit in July 2000, Palestinian negotiators called for a right of return or compensation for the Palestinian refugees of the 1948 Arab-Israeli war. The Israelis countered with a call for recognition of the larger number of Jewish refugees, who had been forced out of Arab countries, had not been compensated, and had ended up in Israel. In an interview after the summit, President Clinton said: ‘‘There is, I think, some interest…on both sides, in also having a fund which compensates the Israelis who were made refugees by the war…”[2]

Following Camp David II, the World Organization of Jews from Arab Countries (WOJAC) and Justice for Jews from Arab Countries (JJAC), took on the task of organizing a campaign to recognize the rights of Jewish refugees.  Currently, a coalition of 65 non-governmental Jewish organizations from 22 countries is involved in the campaign. Of these, 22 (42%) are based in the US and 4 (6%) are in Canada. The IRRC’s stated goals are to “…record and publicize the mass violations of human rights suffered by Jews under Arab regimes and document the loss of extensive communal and individual assets.”

The governments of Israel and the US have also demonstrated their support for the cause.  Israel’s Ministry of Justice is cataloguing and preserving evidence of refugee claims and compiling the legal and factual basis necessary to support Jewish refugee rights.[3]  In the US, a recent Senate resolution calls on the US Government to support the position that, as an integral part of any comprehensive peace, consideration be given to the legitimate rights of all refugees displaced from Arab and Muslim countries, and to the losses incurred by Jews, Christians, and other minority groups as a result of the Arab-Israeli conflict.

Is there opposition to the campaign to recognize Jewish refugees?

To skeptics, the campaign is little more than “…cynical attempts to undercut the claims of Palestinians who fled Israel at its establishment.”[4] A professor of Arab studies at Columbia University argues "This is a bait-and-switch tactic that does not serve either Palestinians or Oriental Jews or a just peace."[5] A New York physician and Jew who fled Iraq in 1950 “…recalled being greeted in Israel as a Zionist pioneer who had come to the motherland, not pitied as a refugee whose family's business had been confiscated.”[6] Jewish refugees and Israeli scholars acknowledge that Israel did not press for compensation immediately after the war because “[t]he nation's identity rested on seeing itself as the chosen refuge of the world's Jews.”[7]  Indeed, historically, such campaigns have been considered “anti-Zionist” as they undercut the traditional ideological narrative of Zionism.

Perhaps the most incisive criticism comes from Yehouda Shenhav, a professor at TelAvivUniversity and author of The Arab Jews: A Postcolonial Reading of Nationalism, Religion, and Ethnicity.  He, too, argues that the current campaign for recognition of Jewish refugees is “a folly attempt to use the Arab Jews and their histories to counter-balance the Palestinian claim for the so called ‘right of return.’”[8]  The current campaign has not won mass support in Israel, and no Israeli politicians have enthusiastically endorsed the campaign.  Shenhav reasons that Israeli governments have avoided issuing declarations in support of Arab Jewish refugees for two reasons: (1) such proclamations might unleash a new wave of global support for Palestinians' demand for return; and (2) the political and financial costs of such a declaration would likely far outweigh the benefits by virtue of the potentially greater number of Palestinian property claims compared to Jewish refugee claims.

Does this campaign impact Palestinian refugee claims for redress?