CJPME Factsheet 26, published May, 2007: Lebanon is extremely diverse religiously, culturally and politically.  This diversity has complicated the development of a stable political arrangement, and impeded the development of a single national identity.  As for diversity,  there are six different Muslim sects (in numeric order: Shi'a, Sunni, Druze, Isma'ili, Alawite or Nusayri), and twelve different Christian sects (in numeric order: Maronite Catholic, Greek Orthodox, Melkite Catholic, Armenian Orthodox, Syrian Catholic, Armenian Catholic, Syrian Orthodox, Roman Catholic, Chaldean, Assyrian, Copt, Protestant.)  These sects are largely geographically defined.  This mosaic of peoples and politics has led the Lebanese to historically seek a balance of power through a political arrangement known as confessionalism.

Factsheet Series No. 26, created: May 2007, Canadians for Justice and Peace in the Middle East
View factsheet in PDF format 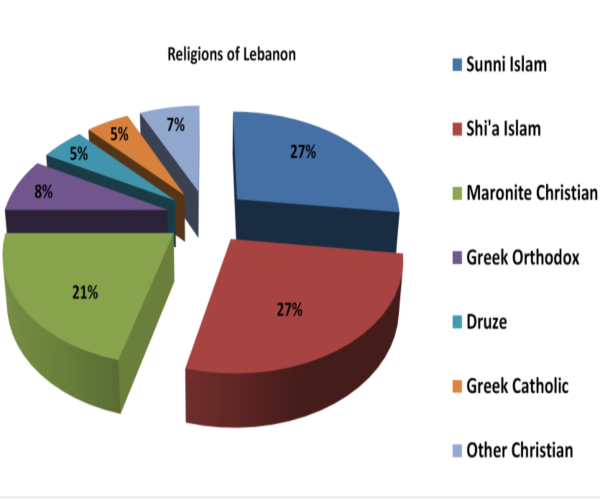 Lebanon is extremely diverse religiously, culturally and politically. This diversity has complicated the development of a stable political arrangement, and impeded the development of a single national identity. As for diversity, there are six different Muslim sects (in numeric order: Shi'a, Sunni, Druze, Isma'ili, Alawite or Nusayri), and twelve different Christian sects (in numeric order: Maronite Catholic, Greek Orthodox, Melkite Catholic, Armenian Orthodox, Syrian Catholic, Armenian Catholic, Syrian Orthodox, Roman Catholic, Chaldean, Assyrian, Copt, Protestant.) These sects are largely geographically defined. This mosaic of peoples and politics has led the Lebanese to historically seek a balance of power through a political arrangement known as confessionalism.

Confessionalism is a type of consociationalism. Political scientists describe a consociational state as a state which functions durably despite major internal divisions along ethnic, religious, or linguistic lines in which no sub-group commands a majority. Common examples of consociational states include Belgium, Switzerland, India, Spain, Lebanon and the Netherlands. Confessionalism is a system of consociational government which distributes political and institutional power proportionally among religious sub-communities. Lebanon is a confessional state where, for example, positions in cabinet, parliament, the civil service and other institutions are apportioned according to the relative religious populations.

What is the History of Confessionalism in Lebanon?

Most scholars agree that various forms of confessionalism existed in Lebanon as early as the 13th century, and later in various forms under Ottoman rule. “Greater Lebanon” with its current borders was established in August 1920 by the French colonial regime governing Lebanon and modern-day Syria. Encouraged by the Maronite community, the French formed “Greater Lebanon” by melding the old province of Lebanon (i.e. Mont-Liban, largely Maronite) with the coastal regions of Beirut, Sidon, Tyre and Tripoli, as well as the Bekaa Valley (largely Muslim.) The Lebanese Muslims and Syria, however, opposed this, and demanded that the additional territories remain under Syrian control. The Maronite community and the French disagreed, asserting that the new boundaries of “Greater Lebanon” formed the natural frontiers of Lebanon. The resulting stalemate triggered over twenty years of confrontations and turmoil.

It was the common interest to throw off the French colonial presence in 1943 which led to the first conciliatory power-sharing breakthrough between Christians and Muslims in Lebanon. In what became known as the National Pact, 1) the Muslim leadership agreed to cease pushing to incorporate Lebanon into a single Arab or Syrian state, and accepted the boundaries of “Greater Lebanon,” while 2) the Christian leadership agreed to cease looking to France or other Western nations for protection or military pacts. This initial confessional arrangement fixed confessional representation in political positions, public offices, and public funding, among other agreements. Christians and Muslims were represented in parliament according to a 6:5 population ratio, a ratio that was determined according to a 1932 census under the French mandate.

The National Pact of 1943 functioned passably for three decades until its collapse in 1975 with the outbreak of civil war. From 1975 through 1989, Lebanon reeled under a civil war characterized by shifting sectarian alliances and divisions. This war was finally brought to a close when conditions among the warring parties in Lebanon and in the broader region converged to permit a cessation of conflict. The Taif Accord, negotiated with the help of international leaders and signed by Lebanese parliamentarians in Taif, Saudi Arabia in 1989, ultimately perpetuated Lebanon’s confessional system. Nevertheless, it tweaked the previous power formula to a 50-50 balance between Lebanon’s Christian and Muslim communities, and pointed toward a non-confessional system for Lebanon’s distant future.

How does Confessionalism contribute to Lebanon’s instability?

The intent of the confessional system in Lebanon is that, in theory, it enables the peaceful co-existence of Lebanon’s religious and ethnic communities by allotting power to each according to its demographic weight. Nevertheless, Lebanon’s delicate confessional balance within a society of minorities makes it extremely sensitive to internal changes and external forces. Minor changes in the political, diplomatic or demographic environment in Lebanon can trigger mass uncertainty and instability. Examples include:

• Demographic Change. The influx of Palestinian refugees into Lebanon in the early 1970s was initially welcomed by Lebanon’s Sunni community, as they viewed the Palestinians – largely Sunni – as a boost to their demographic weight. Other groups were threatened by this influx.
• Political and Demographic Manipulation. In the 1950s, Lebanon’s Maronite President Camille Chamoun accorded Palestinian Christians the right to apply for Lebanese citizenship, thus seeking to boost the number of Lebanese Christians. A similar event took place in 1994, with a naturalization decree which increased Lebanon’s population by 10 percent, mostly Muslim.
• Foreign Intervention. Israel sought to tip the scales of power in Lebanon in 1982, when it established an agreement with Lebanese Maronite leaders to install them in power in parallel with its invasion of Lebanon. Syria, Iran, the US and other foreign interests have also interfered.
• Military Balance. Following the Taif Accord, for various reasons, Hezbollah was the one militia which did not disarm as stipulated in the Accord. Naturally, this was a catalyst for instability.

The Taif Accord articulated what most Lebanese will admit, “Abolishing political sectarianism is a fundamental national objective.” While unable to abolish confessionalism in 1989, the Taif Accord proposed reforms to diminish sectarianism: suggesting that posts in the civil service be merit-based; instituting educational changes to promote national unity; removing sectarian labels from identity cards; etc. Underlying this new direction was an understanding of some of the drawbacks of the confessional arrangement:

• The institutionalization and deepening of sectarian differences. Confessional emphases tended to encourage greater allegiance to one’s ethnic group, instead of the state. Confessional emphases create dependencies within one’s ethnic group, e.g. religious institutions exercise direct control over many facets of daily life (e.g. marriage, divorce, inheritance.) Indirect control also abounds, as preferred jobs, housing and education are often obtained through appeals to confessional political representatives. Such institutions undermine the value of one’s national citizenship.
• An undermining of horizontal developmental forces. A modern, secular state depends on the development of common, cross-cutting interests, e.g. economic cooperation and social and cultural development. The Lebanese confessional system creates an opposing incentive for community leaders to consolidate the “vertical” integration of their communities.
• Demographic and social need is unaccomodated in political representation. There has not been an official census in Lebanon since 1932 as it represents a threat to the status quo. Nevertheless, readjustments in the political and social balance are essential in order to reflect the cumulative effects of emigration, birth rates, social need and social disparities. In a confessional system without such readjustments, social discontent between confessions will inevitably explode.

[1] El Khazen, Farid, Permanent Settlement of Palestinians in Lebanon: A Recipe for Conflict, Journal of Refugee Studies Vol. 10, No. 3, 1997

[1] Makdisi, Ussama, Reconstructing the Nation-State: The Modernity of Secularism in Lebanon, March, 2006, http://www.usip.org/pubs/usipeace_briefings/2006/0330_lebanon_confessionalism.html