CJPME Factsheet 30, published January, 2008: This factsheets provides an overview of the Annapolis negotiations process. On November 27, 2007, in Annapolis, Maryland, US President George W. Bush, Israeli Prime Minister Ehud Olmert and PLO Chairman Mahmoud Abbas presented a well publicized joint statement committing to recommence negotiations, with a view to having some final agreement by the end of 2008.  The parties promised to resolve “all outstanding issues, including all core issues without exception.”

Factsheet Series No. 30, created: January 2008, Canadians for Justice and Peace in the Middle East
View factsheet in PDF format 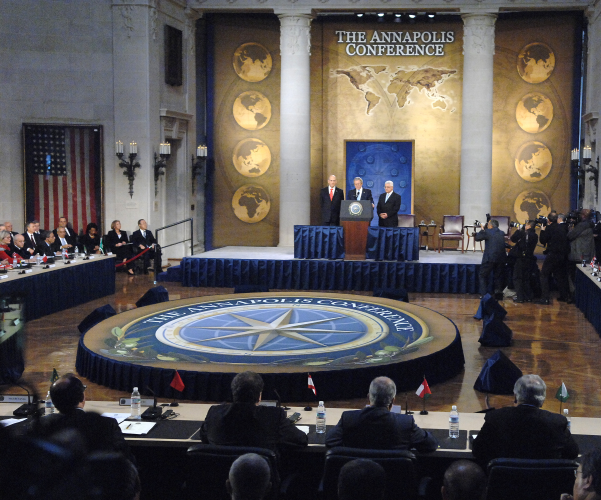 “Annapolis” was the kick-off of a new set of negotiations between Israel and the Palestinians.  On November 27, 2007, in Annapolis, Maryland, US President George W. Bush, Israeli Prime Minister Ehud Olmert and PLO Chairman Mahmoud Abbas presented a well publicized joint statement committing to recommence negotiations, with a view to having some final agreement by the end of 2008.  The parties promised to resolve “all outstanding issues, including all core issues without exception.” [1]  Olmert and Abbas also agreed to implement their respective obligations to the 2003 “Road Map Peace Plan,” adding that the envisioned future treaty will be “subject to the implementation of the Road Map.” [2]  The US is slated to be the judge of adherence to the Road Map.  Real negotiations started on December 12, 2007.

What is the political and financial support for Annapolis?

The Annapolis kick-off was part of a highly orchestrated process to precipitate some negotiated result between Israel and the Palestinians.  Some of the elements of this promotional campaign included:

How successful have early negotiations been?

Early negotiations, which began as scheduled on December 12, 2007, got off to an inauspicious start.  On December 12th itself, and again later in December, Israel announced new plans to expand two of its Jewish-only colonies – in strict violation of the provisions of the Road Map Peace Plan.  Sessions slated for negotiations were subsequently eclipsed by heated arguments on how to proceed given Israel’s pugnacious announcements.  The US administration has expressed great concern over these Israeli plans, as have the Quartet[3], and UN Secretary General Ban Ki-Moon[4], among others.

What are some of the obstacles to just outcomes through Annapolis?

While most would welcome a positive outcome from the negotiations process begun through Annapolis, there are a number of reasons to question whether the negotiated outcomes may promote a just resolution to the standoff between Israel and the Palestinians.  They include:

What promise may there be for just solutions through Annapolis?

A resumption of negotiations after seven violent years must be viewed positively.  As Jimmy Carter and others have pointed out, the status quo and ongoing Israeli practices “on the ground” are unacceptable.  Also promising is the fact that Olmert and Abbas have a certain rapport (absent in the past between, e.g. Arafat and Barak in 2000), borne through ongoing discussions since June, 2007.  Finally, through the Paris conference of December 17th, the World Bank and IMF have given the international community a clear message that recovery in Palestine depends on a change in Israeli occupation practices in Palestine.

How do Palestinians and Israelis feel about the Annapolis Process?

[7] “A Total Lack of Confidence in the Annapolis Process Keeps Hamas’s Popularity Stable despite Worsening Conditions in the Gaza,” Palestinian Center for Policy and Survey Research, Dec. 17, 2007