CJPME Factsheet 38, published May 2008: The UN Convention against Torture and Other Cruel, Inhuman or Degrading Treatment or Punishment defines torture as any act which intentionally inflicts severe mental or physical pain on a victim for the purpose of obtaining information or a confession or for punishing the victim for conduct or suspected conduct. The UN convention was preceded by a long series of other conventions such as the International Covenant on Civil and Political Rights (Article 7), and conventions dealing with the laws of war, all of which strictly prohibit torture and other types of cruel, inhuman or degrading treatment and punishment under any circumstances.

Torture and Detention in Israel

Factsheet Series No. 38, created: May 2008, Canadians for Justice and Peace in the Middle East
View factsheet in PDF format 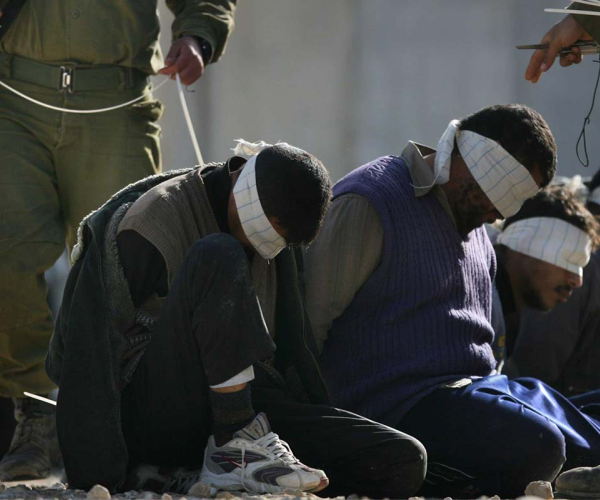 The UN Convention against Torture and Other Cruel, Inhuman or Degrading Treatment or Punishment defines torture as any act which intentionally inflicts severe mental or physical pain on a victim for the purpose of obtaining information or a confession or for punishing the victim for conduct or suspected conduct.[1] The UN convention was preceded by a long series of other conventions such as the International Covenant on Civil and Political Rights (Article 7), and conventions dealing with the laws of war, all of which strictly prohibit torture and other types of cruel, inhuman or degrading treatment and punishment under any circumstances.[2]

Does the State of Israel practice Torture?

In 1987, an official Israeli governmental commission – the Landau Commission – was appointed to examine GSS (Israel’s “General Security Service” intelligence bureau, a.k.a. Shin Bet) interrogation methods.  This Commission documented Israeli practices of torture of previous decades, and justified the continued use of “physical force” in interrogation.  It was not until 1999 after a landmark ruling by the Israeli Supreme Court that steps were undertaken to address the practice of torture by GSS interrogators. The Court came to the conclusion that the systematic torture inflicted by the GSS for some twelve years following the recommendations of the Laudau Commission contravened Israeli Law. [3]

Although the 1999 ruling was seen as a big step to curb the systematic practice of torture in Israel, it left many loopholes which would continue to permit the practice of torture under certain circumstances.  The court ruled that a ‘necessity’ defense of torture could be argued “in instances of ‘ticking time bombs.’” [4] According to the wording of the court, the imminence criteria is satisfied “even if the bomb is set to explode in a few days, or perhaps even after a few weeks, provided the danger is certain to materialize and there is no alternative means of preventing its materialization.”4  In other words, the court was willing to accept that a GSS interrogator use torture if he judged the situation qualified as a ticking time bomb, which was set to go off “perhaps even after a few weeks.”

In a 2001 report, the Public Committee against Torture in Israel estimated that despite the Israeli Supreme Court’s 1999 ruling, dozens of Palestinians interrogated by Israel’s GSS every month continued to be exposed to methods of torture and ill-treatment. The report described how detainees were held in incommunicado detention as GSS interrogators “exhaust them, inflict pain upon them, frighten and humiliate them.”[5] Methods used by GSS interrogators included “a combination of sleep deprivation; prolonged shackling in painful positions; slapping, hitting and kicking; exposure to extreme heat and cold; threats, curses, and insults; complete isolation from the outside world for days and weeks; and detention under sub-human conditions.”5  Many reports by Israeli human rights organizations since the 1999 Court ruling confirm that the GSS has continued to use torture right up to present day. [6]  Torture practices include sleep deprivation, “dry” beatings, painful tightening of the handcuffs, pulling of the handcuffed body, twisting of the head, imposing the “frog” crouch, imposing the “banana” position.[7]

Under what auspices does Israel carry out Administrative Detention?

In the West Bank, administrative detentions are carried out on the basis of the Military Order Regarding Administrative Detention, which empowers military commanders to detain an individual for up to six months if they have “reasonable grounds to presume that the security of the area or public security require the detention.”[8] The Military Order allows the Commanders to extend the detention another six months explicitly if they so judge it necessary. There is no explicit limit for a maximum amount of time an individual may be detained, leaving room for indefinite legal detention. The grounds on which someone can be detained are vague, leaving it up to the military commanders to decide what constitutes “public security” and “security of the area.”

Finally, the laws of occupation forbid the occupier from transferring civilians from occupied territory to its own territory.[11]  The prisons housing the Palestinian detainees are located inside Israel, with one exception of at the Ofer Military Camp in Ramallah. This forces residents of the Occupied Territories wanting to exercise their right to visit a family member in prison to obtain a permit to enter Israel. The permit regime makes such visitation rights extremely difficult to obtain. Israel’s position, according to the Prison Service legal department is that “visitation is a ‘benefit’ that may be denied depending on the prisoner’s conduct and for other reasons; therefore, no minimum number of visits is mandated by statute.”[12]  Such a position is in contradiction with international humanitarian laws, international human rights law and Israeli constitutional law, which sees visitation rights as a human right. Article 116 of the Fourth Geneva Convention states that “every internee shall be allowed to receive visitors, especially near relatives, at regular intervals and as frequently as possible.”  It is Israel’s legal obligation as an occupying state to protect the human rights of the local population, and allowing for the right to visit one’s imprisoned relatives is one of those rights.[13]  This task has been performed since 1969 by the International Committee of the Red Cross, which mediates between the Palestinian residents and the Israeli Authorities in issuing permits to enter Israel, coordinating with the Prisons Service and the IDF the days on whih visits will be held and the security arrangements on the day of the visit, and arranging the visitors’ transportation, all without any logistic or financial assistance by Israel.[14]

[6]  “Absolute Prohibition: The Torture and Ill-Treatment of Palestinian Detainees,” B’Tselem and HaMoked, May 2007.  See also “’Ticking Bombs’: Testimonies of Torture Victims in Israel,” Public Committee Against Torture in Israel, May 2007