CJPME Factsheet 40, published June 2008: In June of 2002 the Israeli government decided to build a Wall with the stated goal of “providing security” to Israeli citizens. In reality, 80% of the Wall is built onWest Bank land and successfully encircles and/or isolates numerous Palestinian population centers. This results in dozens of enclaves caught between the Wall on the East, andIsrael and the Green Line on the West – the “Seam Zone.”

Factsheet Series No. 40, created: June 2008, Canadians for Justice and Peace in the Middle East
View factsheet in PDF format 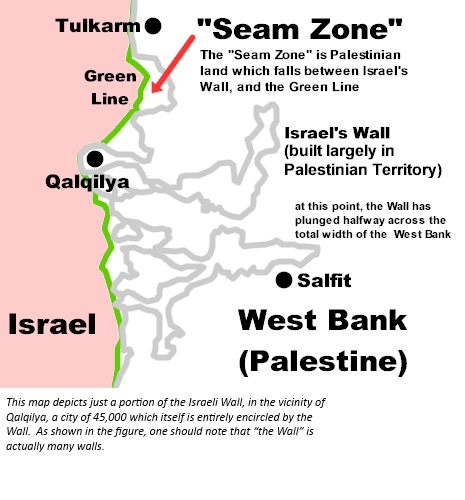 What is the “Seam Zone”?

In June of 2002 the Israeli government decided to build a Wall with the stated goal of “providing security” to Israeli citizens.In reality, 80% of the Wall is built on West Bank land and successfully encircles and/or isolates numerous Palestinian population centers. This results in dozens of enclaves caught between the Wall on the East, and Israel and the Green Line on the West – the “Seam Zone.”  The Wall itself is a combination of an 8 m. high concrete wall (mainly around  Palestinian population centers), trenches, fences, razor wire and military-only roads. There is also a 30-100 m. wide “buffer zone” east of the Wall with electrified fences, trenches, sensors and military patrol roads and some sections have armed sniper towers. In 2004 the world’s highest court, the International Court of Justice (ICJ), ruled that Israel’s construction of the Wall  was  “contrary to international law”  as  it involves the destruction/confiscation of Palestinian property and imposes severe restrictions on Palestinian   movement.  The most current updated route for the Wall successfully annexes approximately 12% of West Bank territory to Israel.[ii] Approximately 50,000 Palestinians now live in the Seam Zone, while hundreds of thousands of others have highly restricted access to these individuals and their communities.[iii]

What is the status of Palestinians living in the Seam Zone? 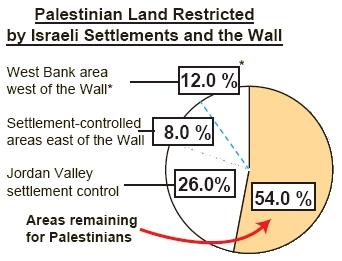 Under international law, Palestinians living in the Seam Zone are considered “internally stuck persons” (ISP’s) as they are a people experiencing rights violations yet are unable to leave. Beginning in October of 2003, a few months after the construction of the Wall, the Israeli government militarily closed the Seam Zone and all Palestinians living there or wanting to enter were required to obtain a permit from the Israeli authorities.[iv] The 50,000 Palestinians living in the Seam Zone and the many thousands of others who work in the Seam Zone were effectively required to obtain permits to live and work on their own land. The website of the Israeli Ministry of Defense states that “Only a small number of Palestinian villages will be included on the western side of the Security Fence. Their residents will not have to relocate and their legal status will remain unchanged.”[v] This official statement directly contradicts numerous findings by human rights organizations. For example, in 2006 two UN agencies (OCHA and UNRWA) surveyed 57 communities and impacted by the Wall and found that 94 individuals - mostly women and children who have already pre-existing vulnerabilities – had not received the necessary ‘permanent resident’ permits required of them. These 94 individuals could no longer leave their own community for fear of not being allowed back.

What are the challenges for Palestinians living in the Seam Zone? 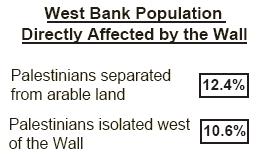 Israel has indefinitely decreed the Seam Zone to be a closed area, adversely affecting the Palestinian population whose livelihood depends on this land.[vii] Palestinians who find themselves residents of the Seam Zone are required to apply for a “permanent resident ID” from the Civil Administration in order to seek permission to remain in their homes and have access to their property.[viii] The majority of the communities living in the Seam Zone are rural and highly dependent on agriculture as a means of employment.[ix] The construction of the Wall has led to the confiscation of more than 230 km2 of the West Bank’s most fertile land (approx. 15% of all West Bank agricultural land).[x] Non-resident Palestinians whose land is found within the Seam Zone must apply for a ‘visitor permit’ to access their own land. The UN has found that only 18% of the 30,000 people who used to previously work the land before completion of the Wall have received visitor permits. These permits are not automatically renewed, and are issued for periods of only six months to two years.  In addition, eligibility requirements imposed by Israel are becoming increasingly harsh, [xi] as other Israeli Absentee owners laws eventually permit Israel to confiscate land isolated from its Palestinian owners.

[iii] UN Office for the Coordination of Humanitarian Affairs “Three Years Later: The Humanitarian Impact of the Barrier Since the International Court of Justice Opinion” July 9, 2007

[vii] B’Tselem “Under the Guise of Security: Routing the Separation Barrier to Enable Israeli Settlement Expansion in the West Bank” December 2005

[viii] World Bank. Movement and Access Restrictions in the West Bank: Uncertainty and Inefficiency in the Palestinian Economy. May 2007

[ix] UN Office for the Coordination of Humanitarian Affairs “The Barrier Gate and Permit Regime Four Years On: Humanitarian Impact in the Northern West Bank” November 2007