CJPME Factsheet 44, published August 2008: This factsheet provides an overview of the case of the Palestinian village of Bil'in, located in the Israeli occupied Palestinian Territories. Because of a persistent, disciplined and peaceful resistance campaign, Bil’in been able to win some minor though significant victories over Israel’s regime of occupation: by attracting international attention, winning against the Israeli Supreme Court in 2007 and by launching a lawsuit against two Montreal companies.

Factsheet Series No. 44, created: August 2008, Canadians for Justice and Peace in the Middle East
View factsheet in PDF format 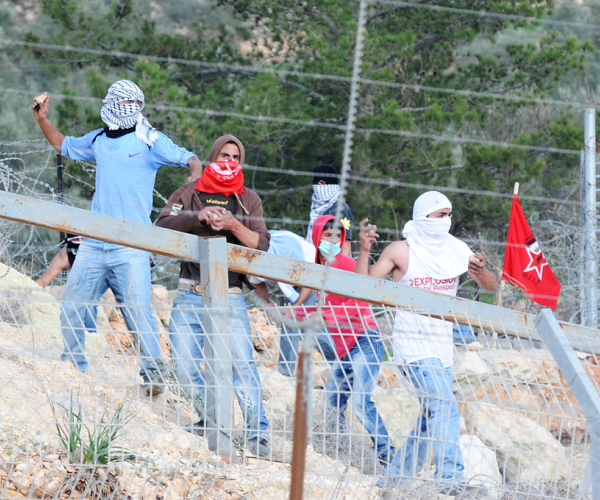 The Palestinian village of Bil’in is located in the Israeli occupied PalestinianTerritories (OPT), i.e. the West Bank.  About 12 km. west of Ramallah, Bil’in is well inside the West Bank, and far from the armistice line with Israel (i.e. the “Green Line”) defined by the ceasefire of 1948.  Following the 1967 war and the Israeli invasion and occupation of the West Bank, however, Bil’in found itself under Israeli occupation and remains so to this day.  It was not until 1995 with the signing of the Interim Agreement on the West Bank and Gaza Strip (a.k.a. Oslo II) that the Palestinian National Authority began to play an administrative role in the area. Bil’in has a population of about 1,800.

Why is Bil’in notable, especially in Canada?

Because of a persistent, disciplined and peaceful resistance campaign, Bil’in been able to win some minor though significant victories over Israel’s regime of occupation.  Bil’in is significant for three reasons:

Why has Bil’in’s Resistance Campaign been so Successful?

When Bil’in, an agricultural community, began to lose access to about 60 percent of its lands due to the presence of the Israeli Wall in 2005, villagers had nothing left but to protest.  Yet their protests garnered international attention because of their persistence – they have continued for over three years – and because the villagers forbade the use of any firearms as part of the protests.  Reports vary on the injuries sustained since the protests began, but given the frequency and predictability of the demonstrations, the casualty rates are surprisingly low. [1]

One Bil’in villager was reported as stating, “Weapons were forbidden from the start.  People decided we should take a prominent role with a peaceful movement because we knew that with an armed struggle we were not capable of taking back one inch of land.  If we had fired one bullet, the Israeli army would have found an excuse to kill the whole village.” [2]

Over time, Israeli and international activists began to participate in the weekly demonstrations [3] and they took on an entirely new dimension, forcing the Israeli government to deal more seriously with the village’s grievances.  Bil’in demonstrations regularly attract activists from Israeli and international groups, including Gush Shalom, Anarchists Against the Wall and the International Solidarity Movement.  The protests depart from the village and go to sites at the Wall, with the intent of slowing construction of the Wall, or dismantling completed sections.

What Legal Case did Bil’in win in Israeli Courts in 2007?

Bil’in is located 4-5 kilometers east of the Green Line, yet the Israeli government chose to route its Wall to the immediate West of the village itself.  This routing, clarified in a February, 2005 Israeli Defense Ministry document, had the result of preventing citizens of Bil’in from accessing almost two km. sq. [4] of village lands.  Israel founded the Israeli colony of Modi’in Illit in 1981 in the OPT to the west of Bil’in, and the illegal colony is now home to more than 30,000 Israelis.  One of the fastest growing illegal Israeli colonies, Modi’in Illit had plans to use the land confiscated from Bil’in for further urban development.

The village launched a lawsuit against the Wall claiming that the route of the Wall – right next to the village itself – could not be justified on the basis of security. [5]  This argument had been used successfully on rare occasions by other villages, first in 2004.  In September, 2007, the Israeli Supreme Court ruled in favour of the village and asked the government to propose a new route for the Wall in the vicinity of Bil’in.  In the decision Israeli Supreme Court President Beinisch wrote that “the route of the separation barrier should not be planned based on the desire to include land earmarked for expanding [colonies] on the ‘Israeli side,’ especially if the plans are not to be realized soon.” [6]

Like those few Palestinian villages that receive a favourable rulings from the Israeli Supreme Court, the government is supposed to find a new route for the Wall which allows more (but by no means all) village land to remain accessible to villagers.  In Bil’in’s case, if implemented, the Court ruling should make about half (i.e. one km. sq.) of the lost land available to the village again.

Almost one year after the Israeli Court ruling, there were still no changes on the ground for Bil’in villagers.  In early August, 2008, the Israeli government finally proposed a revised route for the Wall to the Court, which was summarily rejected.  The state had argued that the 2007 Court decision had simply asked the Israel to “consider” a new route, but did not oblige the state to actually change the route.  Judge Beinisch declared the state’s interpretation to be “impossible,” while another Court judge noted that the state’s response to the 2007 ruling constituted “a direct extreme violation of the [previous] Court ruling.”  The Court demanded a new route proposal within 45 days.  The Court also noted that in the intervening year, the colony of Modi’in Illit had aggressively pursued construction near the Wall. [7]

What is Bil’in’s lawsuit against two Montreal Companies?

In 2008 the village of Bil’in initiated a lawsuit in Quebec Superior Court against two companies registered in Quebec with offices in Montreal: Green Park International Inc. and Green Mount International Inc.  The two companies are accused of having marketed, constructed and sold colonist units in Modi’in Illit on land belonging to Bil’in.  The petition, filed by the Bil’in’s Canadian lawyer, Mark Arnold, argues that by acting as agents of the State of Israel, the defendants aid, abet, assist and conspire with Israel, the Occupying Power in the West Bank, in implementing an illegal act.[8]

The lawsuit cited relevant instruments of international and Canadian law in describing the village’s case against the two companies.  The Fourth Geneva Convention states that it is illegal for an Occupying Power to transfer part of its own civilian population into the territory it occupies. Such a transfer of colonials into occupied territory is a war crime under the Rome Statute of the International Criminal Court, as well as under Canada’s Crimes Against Humanity and War Crimes Act of 2000.

While Bil’in’s Canadian lawyer expects the two companies to try to get the case thrown out on legal arguments of jurisdiction, if the Quebec Court agrees to hear the case, it is expected to be heard later in the Fall of 2008.

[5] Note that an Israeli Human Rights organization, B’Tselem, issued a respected analysis challenging the course of the Wall.  See  “Under the Guise of Security: Routing the Separation Barrier to Enable the Expansion of Israeli Settlements in the West Bank,” B’Tselem, Dec. 2005, http://www.btselem.org/Download/200512_Under_the_Guise_of_Security_Eng.pdf, accessed Aug. 17, 2008

[8] Please refer to the lawsuit itself, or refer to the relatively comprehensive CBC report on the case: “Palestinian village sues Canadian builders over Israeli settlement,” Smith, Corinne, CBC News, July 10, 2008