CJPME Factsheet 47, published January 2009: This factsheet provides an overview of Hamas’ positions on the Israeli-Palestinian conflict. It examines the1988 Hamas Charter and questions whether or not Hamas wants peace before explaining why Israel refuses to negociate with Hamas.

Hamas and Peace with Israel

Factsheet Series No. 47, created: January 2009, Canadians for Justice and Peace in the Middle East
View factsheet in PDF format 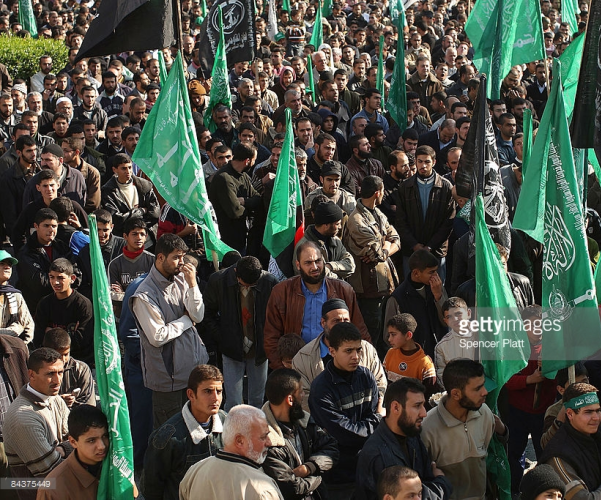 What does the Hamas Charter of 1988 say regarding Israel?

Much controversy surrounds the 1988 Hamas Charter and specifically, its provisions that are seen as implying the destruction of the state of Israel. Some of the main points of significance from the Hamas Charter regarding Israel are as follows:

Yes.  Since 2004, Hamas leaders have repeatedly and consistently stated that they would accept a peace based on an Israeli withdrawal to the 1967 borders (i.e. the Green Line.)  (Israel currently maintains an occupation of the West Bank and Gaza and has about 450,000 colonists in occupied Palestinian territory.)  On January 6, 2004, the co-founder of Hamas, Abdel Aziz al-Rantissi, offered Israelde facto recognition if Israel withdrew to the 1967 borders.[1]  Significantly, during the 2006 Palestinian elections, Hamas omitted any call for the destruction of Israel in its election platform.[2]  Hamas also adopted a policy of ambiguity in regards to the Saudi Peace Plan that was resurrected in 2007: as part of the Palestinian Unity Government at the time, Hamas neither blocked nor accepted the Plan, but allowed Mahmoud Abbas to vote in favour of the plan on behalf of the Palestinian Authority.  (The plan would have normalized relations between Israel and the Arab world, if Israel had withdrawn to the 1967 borders.)  The leader-in-exile of Hamas, Khaled Meshaal, has also said that Hamas accepts the existence of Israel and will recognize it once a Palestinian state is established. Mr. Meshal said in 2007 that “The problem is not that there is an entity called Israel. The problem is that the Palestinian state is non-existent.”[3]

Why does Israel choose not to negotiate with Hamas?

On the basis of some of the provisions of the Hamas Charter as described above, Israel and other countries argue that negotiation with Hamas as the legitimately-elected Palestinian government is not possible.  Israel argues that Charter clauses can be interpreted as meaning that Hamas actively seeks the destruction of Israel; and does not recognise past accords between Israel and the PLO. However, there are two problems with Israel’s position:

Was “recognition” an issue in past Israeli-Palestinian negotiations?

No.  It is important to note that Israel negotiated peace accords with the PLO despite similar clauses that were included and in force in the 1968 Palestinian National Charter at the time of such contact. These clauses were rendered void only after the 1993 Declaration of Principles (Oslo) was signed. It is critical here to highlight that while the PLO formally recognised Israel’s right to exist, both in official communiqués and by nullifying parts of its Charter, Israel did not recognise the right of the Palestinian people to a state.  Instead, Israel only recognised the PLO as the legitimate representative of the Palestinian people.

While the 1993 Declaration of Principles signalled only the beginning of formal Israel-PLO negotiations, it is nonetheless the case that the negotiations leading up to its signing were held between Israeli and PLO representatives at a time when the PLO Charter still contained the above clauses and when Israel formally considered the PLO a terrorist organisation.[4]

Formal recognition, then, was understood by both sides as being a point of negotiation and not a condition for negotiation. That the PLO Charter called for the liberation of all of Palestine did not hinder Israel at the time, nor should it be considered an acceptable excuse at the present moment. Moreover, the formal PLO Charter clauses did not prevent the PLO from taking positions at odds with them; just as Hamas has indicated its potential acceptance of a two-state solution.[5] [6]

Does Israel recognize the Palestinian right to exist?

No, not necessarily.   Since its founding in 1973, the Likud party has either formed the Israeli government, or been the strongest opposition party.  Moreover, it was in power at a time when the Oslo Accords with the PLO were still being negotiated.  Concerning Palestinian self-determination, it’s 2006 election platform stated:

“The Government of Israel flatly rejects the establishment of a Palestinian Arab state west of the Jordan river. The Palestinians can run their lives freely in the framework of self-rule, but not as an independent and sovereign state. Thus, for example, in matters of foreign affairs, security, immigration and ecology, their activity shall be limited in accordance with imperatives of Israel's existence, security and national needs.” [7]

Other examples of outright Israeli opposition to a Palestinian state include:

While the Likud and other party platforms represent the point of view of a party and not necessarily of the state of Israel, there are some Israeli laws that stand in stark contradiction to some of the core elements of negotiations with the Palestinians. For instance, one of the Basic Laws of Israel is on the status of Jerusalem and states, “1. Jerusalem, complete and united, is the capital of Israel.”  Given such a clause in a founding law of the state of Israel, Israel’s overtures of peace should be viewed with the same scrutiny as those of the Palestinians.