CJPME Factsheet 49, published January 2009: This factsheet looks at the causes and consequences of Israel’s 2008 war on Gaza. With nearly 1300 Gazans killed (including hundreds of women and children), 13 dead Israelis and none of the Israeli stated objectives for the war accomplished, we can ask ourselves if this war changed anything.

Factsheet Series No. 49, created: January, Canadians for Justice and Peace in the Middle East
View factsheet in PDF format 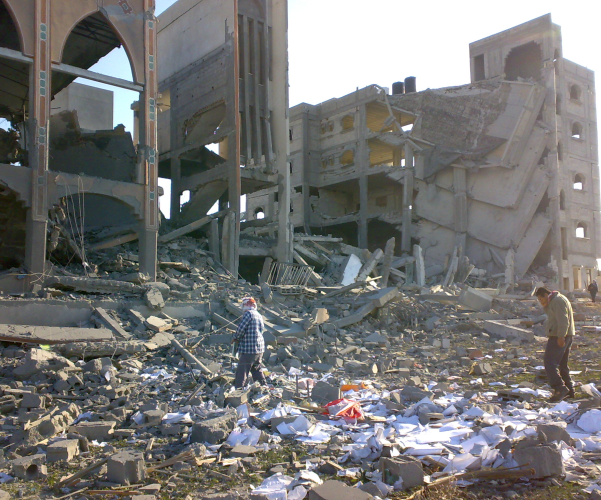 Who broke the ceasefire originally brokered in June, 2008?

Israel broke the ceasefire on Nov. 4, 2008, when its armed forces carried out a raid into Gaza, resulting in the deaths of 6 Palestinians.[1] Hamas had not fired any rockets from Gaza since the start of the ceasefire on June 19, 2008 and only resumed following the Israeli attack.

Was Israel’s war on Gaza really a response to rockets?

Evidence suggests it was not. Firstly, long-term preparations went into planning the attacks on Gaza. Ehud Barak, Israel’s Defense Minister, instructed the Israeli army to prepare for the war six months prior, as Israel was beginning to negotiate the ceasefire with Hamas. Israel used the ceasefire to carry out a comprehensive intelligence gathering on Hamas infrastructure in Gaza.[2] Dan Gillerman, Israel’s former ambassador to the UN, reported that Israel had begun planning the propaganda campaign to sell the war months before the conflict began.[3] Secondly, the ceasefire held and Hamas did not fire any rockets into Israel despite Israel refusing to end the blockade of Gaza. Rocket fire from Gaza was reduced by 97% and the few rockets that were fired were from militant groups other than Hamas.[4] Hamas only fired rockets after Israel killed six Palestinians in a raid. Thirdly, after the ceasefire expired Hamas wanted to renew the truce but wanted the crippling blockade to be lifted and wanted the ceasefire to extend to the Palestinians living under occupation in the West Bank. Though a negotiated settlement could have been reached, the Israelis refused.

Israel claimed its war was against Hamas and its rocket attacks, yet Israel frequently targeted civilian areas and facilities, killing more than 400 children. Hamas had shown itself capable of negotiating settlements and delivering on its promises. Israel has insisted that Hamas not be recognized as a legitimate actor in the region, and it is likely for this reason that it chose war over extending the truce.

The timing of the attacks coincided with the last weeks of the Bush presidency and upcoming elections in Israel. Tzipi Livni, Foreign Affairs Minister, is the leader of the Kadima Party and stands to become Prime Minister in the February 2009 elections. Ehud Bark, who planned the attacks, is the head of the Labor Party so he is also a candidate for Prime Minister. The War on Gaza helped consolidate their image as being “tough” on Hamas.

What were the outcomes of the war on Gaza?

At the end of the war on Gaza:

Did Israel accomplish its stated objectives for the war?

During the war, Israel stated that it wanted to 1) stop rocket fire from Gaza, 2) prevent the smuggling of weapons via tunnels into the Gaza strip, and 3) weaken Hamas. None of these objectives seem to have been satisfied.  Hamas was able to fire at least 19 rockets into Israel soon after Israel declared a unilateral ceasefire.[13] The tunnels—which Gazans say are a vital lifeline for supplies due to the Israeli siege and which Israel says are used to smuggle weapons—were bombed throughout the war on Gaza yet many were operational again almost immediately after the ceasefires came into effect.[14] Israeli planes bombed the tunnels again on January 29 and Hamas responded by firing a rocket into Israel.[15]

If Israel’s goal were to weaken Hamas then there is no sign it has succeeded. Palestinian public opinion was unanimously against the War on Gaza and it has prompted a renewed effort to solve differences between rival Palestinian factions. Hamas is still in charge in Gaza and is overseeing reconstruction efforts as the government of any country would do. It has pledged 1,300$ to the families of deceased, 650$ to inured people and 5,200$ for each family whose house was demolished.[16]

Did the war on Gaza change anything?

The war on Gaza did not change the political reality on the ground in Gaza.  If anything, it only provided extra impetus for rival Palestinian groups to unite. Hamas’ perseverance has shown that it is an actor in the region that cannot simply be dismissed, and many in the West argue that Hamas needs to be dealt with diplomatically rather than militarily. Israel’s war on Hamas, the winner of the 2006 parliamentary elections, also undermines Palestinian confidence in democratic and international mechanisms for change. Palestinians living under occupation in the West Bank were outraged about the carnage. The Western-backed President of the Palestinian Authority in control of the West Bank, Mahmoud Abbas, who has been in negotiations with the Israelis since American-brokered talks were launched in Annapolis, November 26, 2007, has obtained little from the negotiations and Palestinians have not seen an improvement in their quality of life. For these reasons, the War on Gaza may weaken Fatah and Mahmoud Abbas while strengthening Hamas. After the war, the European Union foreign-policy chief announced that the EU would negotiate with any representative from Hamas in a national-unity government (a government made of Fatah and Hamas).[17]

The war on Gaza has increased anti-Arab sentiment in Israel. The Yisrael Beitenu political party in Israel has “emerged as the biggest political winners from the recent war on Gaza. Their unequivocal anti-Arab policies have never been more popular.”[18] The party tried to get Arab parties banned from the Israeli democratic process in the coming elections and argues that Arab communities inside Israel should be exchanged for Jewish settlements in the West Bank. The anti-Arab trend is becoming particularly strong among youths who recently chanted “Death to Arabs” when the leader of Israel's religious-Zionist Meimad Party addressed a meeting of 800 high-school students.

The war’s most prominent physical impact has been the devastation of Gaza and the resulting suffering of Palestinians already facing great humanitarian hardships from Israel’s 20-month-old siege. Even if the siege is lifted, it will take years for Gaza to recover physically and psychologically from Israel’s most recent devastating assault.

[6] “Field update on Gaza from the humanitarian coordinator.” United Nations Office for the Coordination of Humanitarian Affairs. January 24-26, 2009.