CJPME Factsheet 51, published February, 2009: This factsheet looks at the Sabra and Shatila massacres. The Sabra and Shatila massacre was the killing of between 700 (the official Israeli figure) and 3500 (in the inquiry launched by the Israeli journalist Amnon Kapeliouk) civilians, mostly Palestinians refugees. In addition to providing an historical context to the massacre, this factsheet also looks at the responsibility of the different actors surrounding the massacre: the Phalanges (a Lebanese militia), the Israeli military and Minister of Defence Arial Sharon.

The Sabra and Shatila Massacres, 1982

Factsheet Series No. 51, created: February 2009, Canadians for Justice and Peace in the Middle East
View factsheet in PDF format 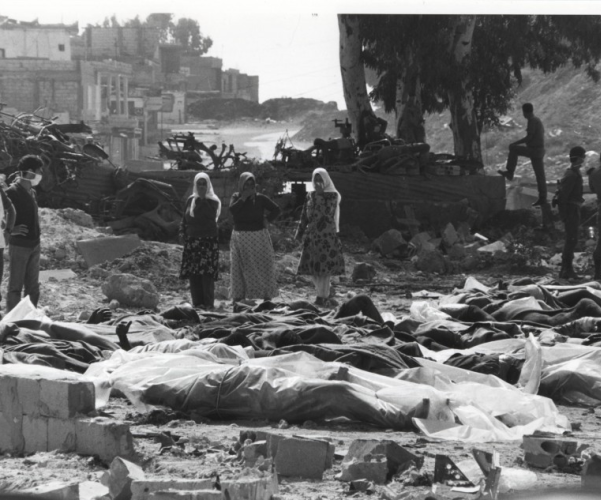 How did Palestinians end up in refugee camps in Lebanon?

An estimated 700 thousand to 1 million Palestinians became refugees in 1947 and 1948 as a result of 1) Ben-Gurion’s Dalet Plan of ethnic cleansing, and 2) the 1948 Arab-Israeli War that saw the establishment of the state of Israel.[i]  By 1949, an estimated 104,000 of these refugees arrived in Lebanon.[ii]  Another wave of 450,000 Palestinian refugees fled Israel and the Israeli- occupied Palestinian territories in the aftermath of the 1967 War.  Although figures are disputed, several thousands of these arrived in Lebanon, some having been displaced for a second, even third time.[iii]

Most refugee camps were established on the outskirts of major coastal cities like Beirut, Sidon, and Tyre.  The majority of Palestinian refugees in Lebanon originate from the coastal plains around Haifa, and the fertile areas of what is now the upper Galilee region of Israel.  The official Palestinian refugee population in Lebanon is 410,000, with 216,000 of these living in camps.[iv]  Palestinians therefore represent a full 10 percent of the population of Lebanon.

What was the Sabra and Shatila Massacre?

The history of retributive killings and mass violence during the Lebanese Civil War is as complex as it is contested.  The country fragmented into a system of confessionally-based militias with shifting alliances. [v]  During the war, the Palestinian Liberation Organization (PLO) acted as the primary political and military representative of the Palestinians in Lebanon; its entrance onto the Lebanese political scene after its expulsion from Jordan deeply exacerbated the already tense situation of Lebanese inter-communal politics.  The 1969 Cairo Agreement signed between the PLO and the Lebanese government gave the PLO sole control over Palestinian camps, and barred the Lebanese military from entering them.  However, in 1982, Israel invaded Lebanon and after two months of intense fighting, a cease-fire between Israel and the PLO was negotiated through the mediation of US Envoy, Philip Habib. Under the terms of the ceasefire, the PLO was to evacuate Beirut under the supervision of a multinational force deployed in the western part of the city. The Habib agreement envisaged that West Beirut would subsequently be under the control of the Lebanese army, and the agreement provided guarantees regarding the security of civilians in the camps after the PLO departure.

The evacuation of the PLO ended on 1 September 1982 and on 10 September, the multinational forces left Beirut. The next day, Israeli Defence Minister Ariel Sharon announced that "2,000 terrorists" had remained inside the Palestinian refugee camps around Beirut and needed to be removed. On Wednesday 15 September, the day after the assassination of President-elect Bashir Gemayel, the Israeli army occupied West Beirut, "encircling and sealing" Sabra and Shatila, which were inhabited by Lebanese and Palestinian civilians, ostensibly to deal with the “2,000 terrorists” purportedly still in the camps.[vi]

According to statements made by Ariel Sharon on 22 September in the Knesset, the decision to enter the refugee camps of Sabra and Shatila was made on Wednesday, 15 September.[vii] Also according to General Sharon, the Israeli Command had received the following instruction: "[t]he [Israel Army] forces are forbidden to enter the refugee camps. The 'mopping-up' of the camps will be carried out by the Phalanges or the Lebanese army.”[viii]  On 16 September, two days after the assassination of their leader, president-elect Bashir Gemayel, Christian Phalange militiamen were allowed to enter Sabra and Shatila by the Israeli military. For the next 48 hours the Phalange massacred a large number of unarmed civilians, mainly women, children and the elderly. Though directly carried out by Phalange, the Israeli forces in the area were aware of what was happening in the camps, and provided support for the operation by preventing civilians from leaving the camps, as well as arranging for the camps to be illuminated throughout the night by flares launched by their forces. [ix]

The count of victims varies between 700 (the official Israeli figure) and 3,500 (in the inquiry launched by the Israeli journalist Amnon Kapeliouk). The exact figure can never be determined because, in addition to the hundreds of people who were buried in communal graves by the International Committee of the Red Cross (ICRC) or in the cemeteries of Beirut by families, a large number of corpses were buried beneath bulldozed buildings by the Phalange militiamen during the massacre.  Also, particularly on 17 and 18 September, hundreds of people were carried away alive in trucks towards unknown destinations, and are presumed to have been murdered. [x]

In response to widespread international outrage, and against the stringent opposition of the Begin government, the Israeli Supreme Court established the ‘Kahan Commission’ to investigate Israeli complicity in the massacres.  The Commission found that while the Phalange bore direct responsibility, the Israeli military bore indirect responsibility, and Minister of Defence Arial Sharon bore personal responsibility, recommending he be dismissed.[xi]  Though Begin refused to fire him, Sharon eventually quit in the face of public demonstrations – only to be elected Prime Minister of Israel in 2001.  Elie Hobeika, the Phalangist commander during the massacre, was killed by a car bomb in Beirut in 2002 before he could testify in a Belgian inquiry investigating Sharon’s involvement in the Sabra and Shatila massacre.

Was the Sabra and Shatila massacre an isolated incident?

Thousands of Palestinians were killed in sieges and massacres within camps both before and during the Lebanese Civil War. One of the most notorious cases was the August 1976 massacre in the Tel al-Zaatar camp (ostensibly in retaliation for the PLO perpetrated massacre of civilians in the Maronite city of Damour).  Other sporadic killings of refugees within their camps, both by outside groups and rival Palestinian groups, were also a common occurrence. The period from 1985-88 is referred to as The War of the Camps, during which the Syrian-back Shi’ite Amal militia repeatedly besieged and fought for control of some of the most important Palestinian refugee camps in Lebanon; the longest of these sieges lasted close to six months and was characterized by alarmingly disproportionate numbers of civilian deaths.

Violence against Palestinian civilians has not ceased. In the summer of 2007, the Lebanese Internal Security Force (ISF) pursued Fatah al-Islam militants into the Nahr el-Bared camp near Tripoli. In order to deal with the situation, the ISF pursued a strategy of large-scale, indiscriminate shelling, virtually destroying the camp, and causing 30,000 residents to flee to other camps throughout Lebanon. To this day, Palestinian refugees from Nahr el-Bared camp have been barred from returning, and large portions of the camp remain in ruins.