CJPME Factsheet 52, published February, 2009: This factsheet looks at how Israel failed in all of its obligations under international humanitarian law during the war on Gaza from Dec.27 to Jan. 17th 2009. Indeed, Israel is accused of not allowing sufficient aid into the territory, keeping detained Palestinians during the war in inhumane conditions, and using highly dispersed and non-precision weapons among other things. This factsheet also provides recommendations on how to persecute Israel for war crimes.

Factsheet Series No. 52, created: February 2009, Canadians for Justice and Peace in the Middle East
View factsheet in PDF format 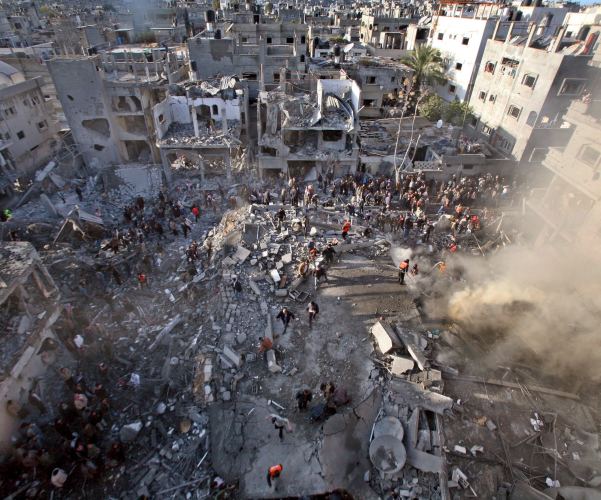 Did Israel allow proper humanitarian access during the war?

International organizations accused Israel throughout the conflict of not allowing sufficient aid into the territory. After a week of fighting,  Israel allowed a three-hour-per-day “humanitarian corridor” ostensibly to facilitate the movement of aid and to permit the evacuation of the wounded.[1] This was not sufficient time to reach people or to bring in emergency supplies. The Israeli army continued to block access to affected neighbourhoods during the “humanitarian corridor” and the UN temporarily suspended aid delivery on January 8 after a UN convoy came under Israeli fire, killing two UNRWA contract workers.[2] Under international law civilians must be protected and given access to medical attention at all times, not just for a few hours a day. The International Committee of the Red Cross (ICRC) and local paramedics complained that the Israeli army was not allowing them to do their job. In a particularly shocking event medical workers found several weakened children clinging to their mothers’ corpses in houses hit by Israeli shells, less than 100 meters from an Israeli position. The Red Cross had been trying to get permission from the Israelis to access the neighbourhood for four days. The ICRC said the “Israeli military failed to meet its obligation under international humanitarian law to care for and evacuate the wounded.”[3] Emergency medical workers repeatedly came under fire by Israeli forces in Gaza while transporting or attempting to reach the wounded or dead. At least thirteen were killed and twenty-two wounded while carrying out their duties.[4]

Did Israel treat prisoners according to international law?

Under international law, prisoners of war should be taken out of harms way, treated in a humane manner and given access to medical attention, food and water. Israeli human rights groups have accused Israel of keeping detained Palestinians during the war on Gaza in appalling and inhumane conditions. In a joint statement, seven Israeli human rights groups said: “The reports indicate, among other things, that many detainees – minors as well as adults – were held for many hours – sometimes for days - in pits dug in the ground, exposed to bitter cold and harsh weather, handcuffed and blindfolded. […] More seriously, some of the detainees were held near tanks and in combat areas, in gross violation of international humanitarian law which prohibits holding prisoners and captives in areas exposed to danger. […] there were also incidents involving extreme violence and humiliation by soldiers and interrogators.”[5]

Was the use of weapons acceptable under international law?

According to international law, it is illegal to use non-precision, or highly dispersed weapons in and around population centers. This is because the risk of killing civilians becomes disproportionately high with the use of such weapons in densely populated areas. Nevertheless, Amnesty International declared that its fact-finding team had found “indisputable evidence” that white phosphorus had been used in densely populated civilian residential areas of Gaza. White phosphorous is highly incendiary. The shells cover areas with wedges impregnated with the substance which ignites at the contact with oxygen. Amnesty’s researcher on Israel and the OccupiedPalestinianTerritories, Donatella Rovera, said that extensive use of this weapon in civilian areas was inherently indiscriminate and that “its repeated use in this manner, despite evidence of its indiscriminate effects and its toll on civilians, is a war crime.”[6]

Hamas, as well, targeted Israeli civilian areas with non-precision rockets during the three weeks of fighting. Over 700 rockets were fired, resulting in 3 civilian deaths.[7][8]

Israel damaged or destroyed 53 installations used by the United Nations Relief Works Agency (UNWRA), the branch of the UN responsible for providing basic services and aid to over a million of Gaza’s 1.5 million people.  37 of the installations were schools—six of which were being used as emergency shelters—six were health centers and two were warehouses.[9] Israel tried to justify some of these attacks by claiming that Hamas militants had used UN facilities as shelter but the UN has disproved those allegations.[10][11] Even if Hamas fighters had been in the immediate vicinity, Israel is still obliged under international law to protect civilians, and if, as Israel contends, Hamas was using civilians as human shields, it does not diminish this obligation.

One of the most disturbing aspects of Israel’s assault has been the enormous number of dead children, over 400. While many children died as a result of Israel’s seemingly indiscriminate bombing of civilian areas, there is documented proof that some children were shot by Israelis at close range.[12]

How could Israel be prosecuted for war crimes?

Further investigations need to be carried out into Israel’s alleged war crimes.  Nevertheless, there can be little doubt that Israel violated the principle of proportionality and failed to protect the civilian population,  both as occupier and as belligerent in its war on Gaza. There are four main options to prosecute and convict those responsible for violations of international humanitarian law and war crimes:

First option: Individual war crime cases are referred to the International Criminal Court (ICC). It is important to note, however, that the ICC has no jurisdiction over Israel in this conflict because Israel has not signed up to the Roman Statute, the treaty which established the ICC. The ICC has no jurisdiction over states that are not party to the treaty unless the UN Security Council refers cases to it, which is unlikely to happen.

Second option: The UN General Assembly can request an advisory opinion from the International Court of Justice (ICJ) based in The Hague. The ICJ ruled in 2004 that Israel’s separation wall, built mostly on occupied land, was illegal under international law, but Tel Aviv ignored the ruling.  If the ICJ were to choose to review the case, a successful ruling would still be difficult to enforce, as the ICJ has no enforcement powers

Third option: Countries can try their own citizens or soldiers for war crimes as required under the Geneva Conventions. Israel has made it clear it will not consider doing this. In fact, as B’Tselem points out, Israel has a history of overlooking crimes committed by its soldiers and officers.

Fourth option: The concept of “universal jurisdiction” permits any state to launch legal proceedings against any person, anywhere in the world, suspected of committing crimes associated with grave breaches of international law. States have been reluctant to do so though a Spanish judge began an investigation on January 29, 2009, into a 2002 Israeli bombing in Gaza that killed a top Hamas militant and fourteen other people, including nine children.[13][14] Suspects under cases of “universal jurisdiction” can be detained or arrested when they travel abroad.

[5] “Israel held many Gaza prisoners in harsh and humiliating conditions and threatened their lives and their health.” Public committee against Torture in Israel. January 28, 2009.