CJPME Factsheet 54, published February, 2009: This factsheet looks at the World Medical Association (WMA), an international organization that determines the proper ethical conduct physicians should abide by at all times. The Israeli Medical Association (IMA) signed WMA’s Declaration of Tokyo in 1975, which prohibits the participation of physicians in interrogations and torture of any kind. Dr. Yoram Blachar, long-standing president of the IMA, was inaugurated as President of the World Medical Association (WMA) in 2008. Many have since called on Dr. Blachar to step down as head of the WMA, since doctors in Israel continue to play an integral role in the everyday running of Israeli interrogation suites that include cruel and inhumane treatment and humiliation amounting to torture.

The WMA, the IMA, Dr. Yoram Blachar and torture in Israel

Factsheet Series No. 054, created: February 2009, Canadians for Justice and Peace in the Middle East
View factsheet in PDF format 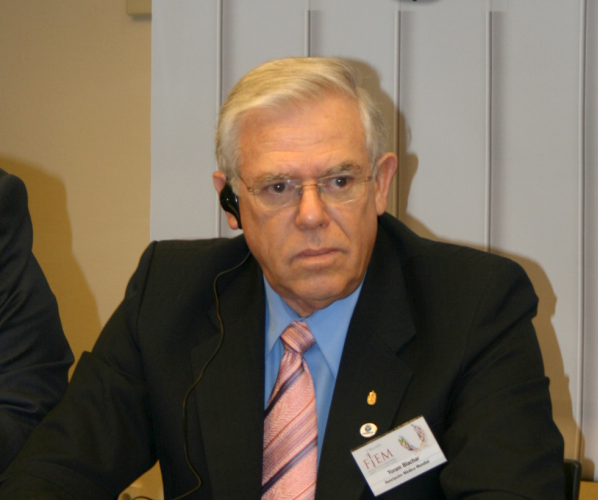 What is the World Medical Association (WMA)?

The World Medical Association (WMA) is an international organization which represents physicians. The organization was founded in the aftermath of the Second World to ensure the independence of physicians, and to determine the proper ethical conduct physicians should abide by at all times.  The WMA is formed by a confederation of approximately 80 national medical associations which work together to “achieve consensus on high standards of medical ethics and professional competence, and to promote the professional freedom of physicians worldwide.”[i] The WMA is composed of national medical associations which represent over eight million doctors worldwide “who are sworn to put their patients’ interest first, and to strive for the best possible health care for all, regardless of race, creed, political allegiance or social standing.”[ii]

What is the WMA’s position regarding torture?

In 2003 the WMA General Assembly adopted a Resolution on “the responsibility of physicians in the documentation and denunciation of acts of torture or cruel or inhuman or degrading treatment.”[iii] Among its recommendations, the resolution states that national medical associations should:

6. Facilitate the production of high-quality medical reports on torture victims for submission to judicial and administrative bodies;

9. Support the adoption in their country of ethical rules and legislative provisions:

9.1  aimed at affirming the ethical obligation on physicians to report or denounce acts of torture or cruel, inhuman or degrading treatment of which they are aware; depending on the circumstances, the report or denunciation would be addressed to medical, legal, national or international authorities, to non-governmental organizations or to the International Criminal Court. […]

What is the IMA?

The Israeli Medical Association represents physicians in Israel. Among its stated objectives, the IMA strives to “maintain a proper professional and ethical standard in medicine” in Israel.[iv] The IMA ratified the WMA’s Declaration of Tokyo (1975) which prohibits the participation of physicians in interrogations and torture of any kind. The Declaration states that “The physician shall not countenance, condone or participate in the practice of torture or other forms of cruel, inhuman or degrading procedures, whatever the offense of which the victim of such procedures is suspected, accused or guilty,” and “A breach of the Geneva Conventions shall in any case be reported by the physician to relevant authorities. […]”[v]

Yes. In 1987, an official governmental commission – the Landau Commission – was appointed to examine the interrogation methods of Israel’s General Security Service (GSS) intelligence bureau. This Commission documented Israeli practices of torture over previous decades, and justified the continued use of “physical force” in interrogation. In a 2001 report, the Public Committee against Torture in Israel estimated that despite a 1999 Israeli Supreme Court ruling against the use of torture, dozens of Palestinians interrogated by the GSS every month continued to be exposed to methods of torture and ill-treatment.

In 1996, Amnesty International released a report entitled “Under constant medical supervision: Torture, ill-treatment and the health professions in Israel and the OccupiedTerritories.” The report concludes that Israeli doctors are deeply involved in the institutionalization of torture, and that Israeli doctors and paramedics in charge of the care of detainees interrogated by the GSS “breach international standards by countenancing or condoning practices which constitute torture. […] Knowing that detainees are exposed to practices which deliberately harm their physical and psychological well-being, doctors have an ethical duty to refrain from declaring detainees fit for further ill-treatment or torture. […] In continuing to give medical care which enables victims to be returned to torture, without taking action to end such torture, Israeli doctors and other health professionals in charge of Palestinian detainees under interrogation have allowed themselves, in violation of their professional ethics, to be a necessary part of a torturing system.”[vi]

Who is Doctor Yoram Blachar?

Dr Yoram Blachar is an Israeli doctor and long-standing president of the IMA. In November 2008, Dr Blachar was inaugurated as President of the World Medical Association (WMA).

Why are some calling on Dr Blachar to step down as head of the WMA?

Some doctors allege there is an inherent contradiction in Dr Blachar serving as head of the WMA and the organization’s declarations and resolutions concerning the responsibilities of physicians when torture is involved. Doctors in Israel continue to play an integral role in the everyday running of Israeli interrogation suites which include cruel and inhumane treatment and humiliation amounting to torture. In its 2008 annual report to the UN Committee against Torture, the UAT Coalition – a coalition of 14 Israeli and Palestinian human rights organisations – concluded that “since the Committee last reviewed Israel, the practice of torture and ill treatment has continued unabated. The UAT Coalition wishes to inform the Committee that in its opinion the use of torture and ill treatment by Israeli authorities against Palestinians is both widespread and systematic.”[vii]

In a 1997 letter to the medical journal The Lancet, Dr. Blachar went as far as defending the use of “moderate physical pressure” (a common euphemism for torture) in Israel.[viii] As chairman of the WMA he stated in a 2003 press release that “physicians need to denounce acts of torture which they become aware of in the course of their medical practice.”[ix] Yet as head of the IMA, Dr Blachar has done nothing to condemn or tackle the well-documented institutionalized use of torture in Israel and the OccupiedPalestinianTerritories.

What is the CMA’s position?

Not only has the Canadian Medical Association (CMA) not opposed the appointment of Dr Blachar, it has signed a memorandum of understanding with the Israeli Medical Association of which he is chairman. In September of 2008, CMA director Dr. Robert Quellet met with Dr. Yoram Blachar in Ottawa to sign the memorandum of understanding.  (Robert Ritter, once the executive director of the Canada-Israel Committee and now the executive director of the Newfoundland Labrador Medical Association, was also involved in this initiative.[x]) The agreement formalizes the relationship and cooperation between the two associations. In communications with CJPME, the current executive director of the CMA, Jeff Blackmer, wrote that the “[…] relationship with the IMA is intended to assist us in understanding the viewpoints of physicians in other parts of the world. […] The CMA (and indeed the IMA) do not support the participation of physicians in torture.” Since the IMA has clearly failed in its responsibilities as a member of the WMA to document and denounce the use of torture inIsrael and theOccupiedTerritories, Mr. Blackmer’s defence of the agreement is perplexing.

[i] “What is the WMA?” World Medical Association. http://www.wma.net/e/about/index.htm

[iii] “Resolution on the responsibility of physicians in the documentation and denunciation of acts of torture or cruel or inhuman or degrading treatment.” World Medical Association. Adopted 2003.

[iv] “What is the IMA.” Israeli Medical Association. http://www.ima.org.il/en/CategoryHome.asp?cat1=159&id=159&tbl=tblCategoryabout&level=1

[vi] “Under constant medical supervision: Torture, ill-treatment and the health professions in Israel and the Occupied Territories.” Amnesty International. August 1996.