CJPME Factsheet 56, published March, 2009: This factsheet provides an overview of the 2009 Conference against Racism, Durban II. During the 2001 Durban I conference, the U.S. and Israel walked out over a draft resolution which likened Zionism to racism, as had UN Resolution 3379, which was eventually revoked as a condition for Israel’s participation in the US-backed peace process. In 2008, Canada withdrew from Durban II, strengthening its close ties with Israel while also labeling any criticism of Israel as inherently anti-Semitic or racist.

Canada and Durban II (i.e. The 2009 Conference against Racism)

Factsheet Series No. 056, created: March 2009, Canadians for Justice and Peace in the Middle East
View factsheet in PDF format 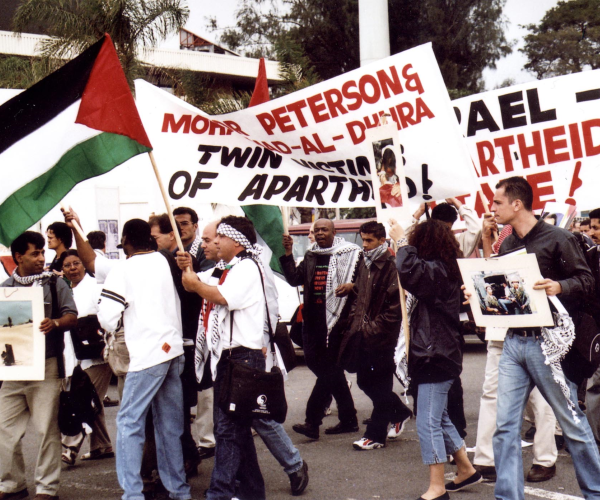 What is the World Conference against Racism (i.e. Durban II)?

Since the adoption of the United Nations Universal Declaration of Human Rights, the world has struggled against racism and ethnic-fuelled conflicts. In December of 1948 the UN General Assembly approved the Convention on the Prevention and Punishment of the Crime of Genocide, and in 1963 the UN General Assembly passed Resolution 1904 (XVIII) proclaiming the UN Declaration on the Elimination of All Forms of Racial Discrimination. In 1978, the First World Conference to Combat Racism and Racial Discrimination was held by the UN in Geneva, Switzerland. The conference focused chiefly on apartheid South Africa’s policies of racial discrimination. A second conference was held in 1983, also in Geneva.

What was the “Zionism is racism” resolution?

What happened at Durban I and why did the U.S. and Israel walk out?

The 2001 Durban I conference became controversial over two contentious issues, 1) Israel’s treatment of the Palestinians and 2) the legacy of slavery in Africa.  African states demanded an apology from European countries that had taken part in the slave trade, and reparations for trans-Atlantic slavery. The Europeans were opposed to both. Arab states demanded that Israel be criticized for its “racist practices.” The U.S. and Israel walked out of the conference over a draft resolution which likened Zionism to racism, as had UN Resolution 3379.

What was the parallel conference of non-governmental organizations?

A parallel NGO forum was held in Durban bringing together anti-racism NGOs from around the world. The forum was hampered by organizational and financial problems as well as distrust between NGOs. Criticism of Israel at the forum was greater than at the UN conference, and the final declaration condemned Israeli polices in much harsher terms than the Conference, declaring that “this alien domination and subjugation with the denial of territorial integrity amounts to colonialism” (article 161), calling “for an immediate end to the Israeli systematic perpetration of racist crimes including war crimes, acts of genocide and ethnic cleansing” (article 160), and recognizing “that targeted victims of Israel’s brand of apartheid and ethnic cleansing methods have been in particular children, women and refugees and condemn the disproportionate numbers of children and women killed and injured in military shooting and bombing attacks” (article 164).[4] The NGO forum branded Israel a “racist, apartheid state.”

What was the outcome of the 2001 Durban conference?

Despite claims to the contrary, the conference can be considered a success. In the end, African and Arab states compromised and all were able to agree on a final, though watered-down, resolution. All explicit criticism of Israel was dropped in the final resolution, though it recognized the Palestinian’s right to self-determination and expressed concerned for their plight. Article 63 of the Declaration reads:

“63. We are concerned about the plight of the Palestinian people under foreign occupation. We recognize the inalienable right of the Palestinian people to self-determination and to the establishment of an independent State and we recognize the right to security for all States in the region, including Israel, and call upon all States to support the peace process and bring it to an early conclusion;”

Why has Canada said it will not attend the 2009 conference?

In 2008, Canada’s Minister of Citizenship, Immigration and Multiculturalism in the sitting Conservative government, Jason Kenny, announced that Canada would not attend the 2009 conference because of possible criticism of Israel, saying later that “My proudest moment as minister was when I announced on behalf of our government that Canada would withdraw from Durban 2.”[5] Since then, the Conservative government has attempted to label any criticism of Israel as inherently anti-Semitic or racist, [6][7] and maintains close ties with several groups which promote unconditional support for the Israeli government, even when Israel contravenes international law. In one example in March, 2009, the Harper government banned British MP George Galloway from entering Canada at the behest of the Jewish Defence League of Canada, a radical group with links to the extreme right in Israel.[8] It’s also interesting to note that Prime Minister Harper was awarded the inaugural International Leadership Award by the Conference of Presidents of Major American Jewish Organizations for his staunch support of Israel and Canada’s decision to not attend Durban II.[9]

Is Canada justified in boycotting the conference?

No. Any practice of racism in the world should be condemned, regardless of the perpetrator.  As the UN High Commissioner for Human Rights, Navi Pillay, has said, the conference has been attacked by a lobbying campaign trying to depict the conference as being anti-Israel. If allegations of racism are made against Israel at the conference, and if they are untrue, then Israel should be able to defend itself. But as one of the world’s leading violators of human rights and international law, Israel should not be shielded from criticism. The last conference also proved to be a success. Countries from around the world with differing points of views were able to come together and agree on a final resolution which was neither “anti-Semitic” nor “anti-Israel”. Canadian support for Israel or any other ally should be based on principles of international law and human rights.  Thus, it is wrong for the Canadian government to give unwarranted diplomatic support to Israel, since, as an occupying force in Palestine, it has persecuted and prevented the self-determination of the Palestinian people for over sixty years. More generally, Canada’s absence will hurt Canada’s image abroad as being a traditional champion of human rights for all peoples. Navi Pillay has urged all countries to put aside their “narrow, parochial interests and reflexive partnership” to work towards eradicating racism in all of its forms, saying that “Failure to do so may reverberate negatively on the full spectrum of human rights work and mechanisms for years to come.”[10]