CJPME Factsheet 64, published May, 2009: This factsheet provides an introduction to the term “respectable racism,” which is defined as actions and speech that should be defined as racist but that are no longer perceived as such by politicians, intellectuals and the public at large. Depictions of Arabs and Muslims as irrational and full of hatred, for instance, are some of the most common examples of respectable racism today. As this kind of racist discourse becomes acceptable, it evolves into “respectable racism,” representing a dangerous norm with detrimental consequences for society at large.

Factsheet Series No. 064, created: May 2009, Canadians for Justice and Peace in the Middle East
View factsheet in PDF format 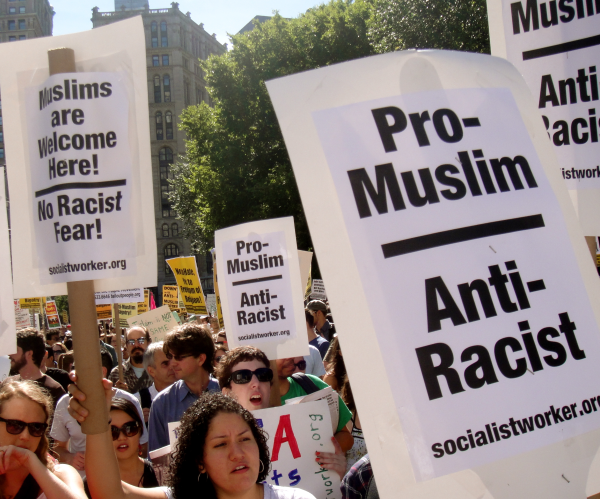 What is “Respectable Racism”?

Sociologist Rachad Antonius, in his paper “A ‘Respectable’ Racism”[i], refers to “respectable racism” as actions and speech that should be defined as racist but that are no longer perceived as such by politicians, intellectuals and the public at large. Racist discourse becomes acceptable when used by politicians and other leading actors in a society because their statuses in that society give that discourse a certain degree of legitimacy, and therefore, respectability.

Depictions of Arabs and Muslims as irrational and full of hatred are some of the most common examples of respectable racism today. Initially used to explain the violent actions of specific Arab or Muslim individuals—most notably those responsible for the 9/11 terrorist attacks—more recently they have been used to generalize about Arab and Muslim culture as a whole. A glaring example of this can be found in the website of the Canadian Broadcasting Corporation's Radio Canada French national TV network, which has labelled it's Middle East section as “the Spiral of Hatred” (La spirale de la haine).[ii]

These kinds of negative connotations have become so closely associated with the terms “Islam” and “Arab” that it is nearly impossible to distinguish between them. Be it an action of a Palestinian civilian, a Lebanese soldier, or an Iraqi public official, if it is violent, the cause of this violence lies in the nature of Arab culture, and not as a consequence of historical experience or social injustice. There is something about being Arab or Muslim, it is insinuated in the mainstream discourse, which causes violence, hatred, and irrational behaviour.

How does racism become “respectable”?

The way in which different groups of people are talked about and represented in public discourse has major implications for the way we act, and for the way we think. Public discourse, which can take place either in the media, in universities, or even at a local cafe, sets the parameters for what a society considers “acceptable” or “politically correct,” and in doing so, serves as a kind of guide for behavior in day-to-day life.

Especially since 9/11, but even before, specific kinds of discourses about Muslims and Arabs have become more prevalent and have had grave consequences for the way these people are treated, both domestically in Canada and the US, but also internationally, via foreign policy. Rachad Antonius has noted that generalizations about Muslims and Arabs previously considered socially unacceptable, or even racist, are now publicly defended as inherent, cultural characteristics, resulting in a new wave of racism—what can be called respectable racism.

What are the manifestations of respectable racism in North America?

‘Respectable’ racism in Canada and in the US is employed by those who want to justify specific foreign policies by representing Arab and Muslim political forces as evil. American and Canadian policy toward the Israeli-Palestinian conflict serves to illustrate this point. By equating Palestinians with violence, support for Palestinians has become equivalent to support for “hate” and “terror,” thereby justifying the opposite: support for the occupation of Palestinian territory and violence against the Palestinian people.

Furthermore, the life of a Palestinians is not given the same attention as the life of an Israeli. Far fewer Israelis die from Palestinian attacks than do Palestinians from Israeli attacks.[iii] Yet when an unarmed Palestinian is killed in the West Bank by Israeli forces, for example, it receives scant attention in the Western press. In fact, the daily suffering of Palestinians is largely absent from the pages of Western publications, and only their violent reaction is given attention. The result is that Israel, the occupier and colonizer, becomes portrayed as the victim. Palestinians are seen as violent and uncompromising, and the suggestion is that their temperament stems from their ethnicity and/or religion, rather than on historical or political factors.

The Western media has been central to this depiction of Arab people as irrational and hateful. Not only has the media propagated these stereotypes, as exemplified in the CBC example above, but it has also helped to distort and deny facts on the ground selectively. A glaring example of this can be found in the actions of the late Mr. Israel Asper, the owner of CanWest Global Media, who circulated a directive in August 2001, to all the editorial boards of his papers (a dozen major dailies in Canada, among others) forbidding them to criticize Israel. The letter also indicated that the central office of CanWest was to be in charge of writing all editorials on the topic, which would then be sent to the various papers for publication.[iv]

According to award-winning journalist, Robert Fisk, there have been strict instructions given to journalists by CNN regarding settlements built around Jerusalem in violation of international law.[v] CNN instructs that these settlements should not be termed ‘settlements’, but rather, ‘Jewish neighbourhoods’, built on ‘land occupied by Israel in 1967’.[vi] The consequence of such distortion is that settlers are portrayed as ordinary Israeli civilians living in Jewish neighbourhoods, and not as armed fundamentalists. Any hostility expressed by Palestinians towards the illegal occupation is not seen as acts of resistance or desperation, but portrayed instead as acts of anti-Semitism.

What are the dangers of this kind of discourse?

By far the biggest problem with respectable racism is that people are not aware it is in fact, racism. Instead these false depictions are taken as reality and thereby legitimize actions which reinforce the mistreatment of the targets of this racism.

Moreover, with significant distortion and denial of crucial information, several things follow. Firstly, displays of anger of Palestinians, Arabs, and Muslims, are perceived as acts of hate. By portraying the anger as a manifestation of hate, the root causes of political violence and terrorism become obscured. Secondly, this hate is cast as a fundamental characteristic of Islamic and Arab cultures, resulting in a negative stereotyping of Arabs and Muslims of the Middle East—stereotypes which serve to reinforce ethnic cleavages in North America.

Understanding what drives hostility towards Arabs and Muslims at home and abroad is of utmost importance for those concerned with issues of social justice. Understanding the causes of hostility towards the West in the Arab world is of equally vital importance. The fact that the present climate is increasingly hostile to free discussion on this topic suggests just how much is at stake for those who have a vested interest in the cessation of this racist discourse.