CJPME Factsheet 70, published November, 2009: This factsheet provides an overview of the new entry restrictions by Israeli Border Control on foreign nationals wishing to travel between Israel, East Jerusalem, the West Bank, and Gaza. The implementation of these new entry restrictions in June 2009 is in clear contravention of principles outlined in international law and the 1995 Oslo II Accords. This factsheet also looks at the Canadian Government’s reaction to these visa violations.

Illegal Restrictions on Movement to/from Israel and the OPT

Factsheet Series No. 070, created: November 2009, Canadians for Justice and Peace in the Middle East
View factsheet in PDF format 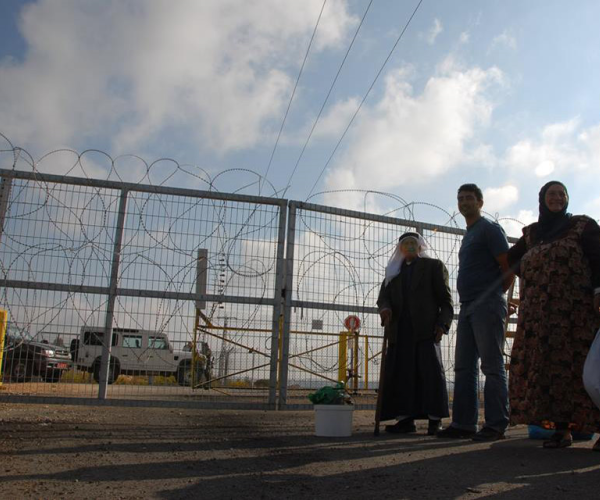 In June 2009, Israeli Border Control began selectively implementing new entry restrictions on foreign nationals wishing to travel between Israel, East Jerusalem, the West Bank, and Gaza, in contravention of principles outlined in international law and the 1995 Oslo II Accords. The Canadian government’s failure to hold Israel accountable once incidents of movement restriction against Canadian citizens became known violates Canada’s obligations under international law and implies acceptance of policies which other governments have deemed to be disproportionately discriminatory against travelers of Arab or Palestinian origin.

What exactly are the changes to Israel’s Border policy?

Prior to June 2009, in the Oslo Accords’ attempt to assure reasonable access to the Palestinian territories, passport-holding travelers from countries having diplomatic relations with Israel could, after obtaining a visa from Israel, travel freely between Israel and the occupied territories of East Jerusalem, the West Bank, and the Gaza Strip. Once tourists crossed into Israeli via an official crossing point (such as the Ben Gurion Airport or Sheikh Hussein bridge separating the West Bank and Jordan), they could move freely within the borders of Israel and the occupied Palestinian territories (oPt) without need for further control.

Under the new Israeli policies however, visitors with a stated interest in entering the oPt are being directed away from international border crossings and required to enter via the Allenby Bridge, an informal entry point connecting Jordan and the West Bank, employed chiefly by Palestinian nationals. The visitors’ passports are then stamped with a hitherto unused “Palestinian Authority Only” visa which denies them entry to Israeli territory beyond the West Bank. Israel has not yet made clear whether or not this visa allows travel to East Jerusalem or the Gaza Strip, though travel into these areas would require passage through Israeli control points, which is not allowed under the “Palestinian Authority Only” visa.[1]

Visitors arriving at Ben Gurion International Airport are required to sign a declaration stating they will not seek entry into the oPt under penalty of deportation and refusal of re-entry into Israel for up to ten years.[2]

Taken together, the new measures described above have far-reaching adverse effects for visitors and their Palestinian hosts in the Territories.  Access to, and movement among Palestinian population centers is curtailed, significantly diminishing the quality of life from an economic and social perspective.


Are the new restrictions on entry into Israel and the oPt applied uniformly and in a transparent fashion to all visitors?

No. Reported incidents of entry denial and use the use of “Palestinian Authority Only” visas have disproportionally affected foreign nationals of Palestinian and Arab origin with close family, historical, or business ties to Palestine. The instances of discrimination were prevalent enough to prompt the following statement from the US State Department:

These stringent new restrictions have also been selectively applied to humanitarian workers, international students undertaking studies in West Bank universities, and the foreign academics teaching at them. Instances of movement restriction have occurred frequently enough so as to warrant the shortening of the academic semester at Palestinian universities from four to three months.[4]

What are the Israel’s legal obligations?

As a signatory of the 1995 Israeli-Palestinian Interim Agreement on the West Bank and the Gaza Strip (also known as the Oslo II Accords), the current movement restrictions imposed on foreign nationals with a stated interest in visiting any combination of Israel, the West Bank, East Jerusalem, or Gaza, have placed Israel in violation of:

Paragraph 14 of Article 28 of Annex III of the Interim Agreement:

Persons from countries having diplomatic relations with Israel who visit the Gaza Strip and the West Bank shall either be required to obtain the aforementioned visitor's permit or to hold a valid passport and an Israeli visa, when required. Such visitors can enter Israel during the validity of their visit permit, without any need for another permit.[5]

Paragraph 13(b) of the same article:

Visitors [from countries not having diplomatic relations with Israel who visit] the Gaza Strip and the West Bank shall be permitted to remain in these areas for a period of up to three months granted by the Palestinian side and cleared by Israel. Such visitors can enter Israel during the validity of their visit permit, without any need for another permit.[6]

Paragraph 1(e) of Article 9 of Annex 1 of the Interim Agreement:

Tourists to the West Bank and the Gaza Strip from countries having diplomatic relations with Israel, who have passed through an international crossing, will not be required to pass any additional entry control before entry into Israel.[7]

Were one to argue that the Oslo agreements no longer apply, then Israel would be beholden to international human rights law.  Human Rights law protects a person who has been permitted legal entry into a country freedom of movement within that country under Article 40, Paragraph 4, of the International Covenant on Civil and Political Rights.[8]  The Universal Declaration of Human Rights also protects the right to freedom of Movement, and the freedom to leave and/or return to one’s country. [9]

Furthermore, as an occupying power and pursuant to the Fourth Geneva Convention of 1949, Israel has a legal obligation to maintain public order and civil life for the welfare of the Palestinian civil population. Presumably, this includes facilitating the movement of persons conducting business inside the oPt, persons teaching or studying in the oPt, conducting humanitarian missions, visiting relatives and family, and other such aspects of civilian life. Violation of this principle is certain to contribute to the isolation and fragmentation of the oPt with the serious adverse socio-economic consequences termed “de-development” by Harvard professor Dr. Sara Roy.[10]

What are Canada’s obligations under international law?

International Law stipulates that once an unlawful practice has been brought to their attention, third nations have an obligation to act. This holds true for violations against the rights of Palestinian people being violated by state action, and rights of a state’s own nationals affected by the measures. Third state failure to object when facts are brought to their attention implies acceptance of these policies.

To date, the Canadian Government’s reaction to these visa violations has been to issue a travel advisory to Canadian Nationals travelling to Israel and the oPt.  It is Canada’s obligation to protect the rights of its citizens and the integrity of its passport. A measured response to the discriminatory and illegal treatment of certain Canadian citizens (singled-out by racial profiling or otherwise) would be the restriction of travel for Israeli nationals visiting Canada to shorter stays, or more stringent visa requirements, until such time that discriminatory policies against Canadian nationals – regardless of race and ethnic origin – are abandoned.

[4] “Israel Bars Some Foreign Academics Who Teach in the West Bank” September 3, 2009. Kalman, The Chronicle of Higher Education.