CJPME Factsheet 72, published January, 2010: This factsheet provides a historical and contextual overview of the United Nations Relief and Works Agency for Palestinians in the Near East (UNRWA), created to provide humanitarian assistance to the 850,000 Palestinian refugees displaced by war or forcibly expelled from their homes between 1947 and 1949. Today, Palestinian refugees now constitute the world’s largest and most enduring refugee population.

Factsheet Series No. 072, created: January 2010, Canadians for Justice and Peace in the Middle East
View factsheet in PDF format 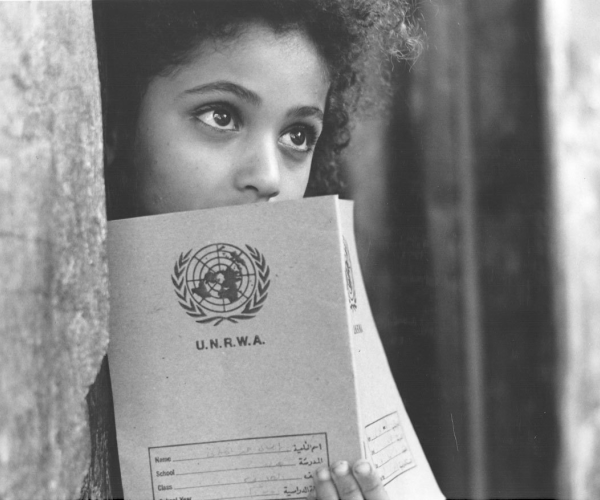 The United Nations Relief and Works Agency for Palestinians in the Near East (UNRWA) was created through UNGA Resolution 302 (IV), 1949 to replace a series of ad hoc humanitarian programmes mobilized to deal with the forced displacement of 850,000 Palestinians from their homes between 1947 and 1949.  A definition of a Palestinian refugee does not exist per se, but is embodied in UNRWA’s mandate to care for “person[s] whose normal residence was Palestine for a minimum of two years preceding the conflict in 1948, and who, as a result of this [Israeli-Arab] conflict, lost both his home and his means of livelihood and took refuge in 1948 in one of the countries where UNRWA provides relief.”[1]

Palestinian refugees now constitute the world’s largest and most enduring refugee population;[2] dubious distinctions that are not only the result of political intransigence, but of a series of anomalous institutional characteristics in comparison with the rest of the world’s refugee populations.

Why do Palestinian refugees fall under a distinct refugee agency?

While the rest of the world’s refugees are guaranteed legal status, rights, and protections by a series of institutions, norms, laws and treaties known as the “international refugee regime”, Palestinians occupy a unique institutional and legal space mostly outside of that regime.  In 1951 the UN codified the legal and political characteristics of the world’s refugees in the Geneva Convention Relating to the Status of Refugees and created the UN High Commission for Refugees (UNHCR).  While these institutions originally focused on Europeans from the WWII and its aftermath, the mandate was expanded to include subsequent refugees with the 1967 Additional Protocol relating to the Status of the Refugees.  Article 1D of the Convention states: “This convention shall not apply to persons who are at present receiving from organs or agencies of the United Nations other than the [UNHCR] protection or assistance.”[3]

The only group to which 1D applied was the roughly 850,000[4] Palestinian refugees created as a result of the establishment of the state of Israel in 1948.  Various academics focusing on the issue, and UNRWA itself note that the reason UNRWA remains distinct from UNHCR is because UNHCR is mandated to offer refugees one of three voluntary options known as the ‘durable solutions’ to refugee crises: naturalization into their host state; resettlement to third countries; return to their place of origin. While there have been limited naturalizations into each of the states of UNRWA operations (Jordan, Lebanon, and Syria), and some third country resettlement, these options are generally infeasible for Palestine refugees as the first two options are unacceptable to the refugees’ host countries and the third is rejected by Israel.[5]  The maintenance of the Palestinian refugee crisis means the continuation of UNRWA operations – the existence of each has become mutually constitutive by virtue of regional and geopolitics.

What does UNRWA do?

UNRWA was originally conceptualized as a temporary agency, with the understanding that a political solution to the Palestinian refugee crisis would come about within three years as the displaced were returned to their homes in Israel (as embodied in UNSC Resolution 194 of 1948), compensated for their dispossession, resettled, or naturalized into their host state populations.  As it became clear that the Palestinian refugee crisis would not be solved in the proscribed time period, UNRWA expanded its mandate (and therefore the definition of a Palestinian refugee) to include the descendants of the original 1948 refugees

UNRWA originally focused on what it called ‘rehabilitative’ operations – essentially integration programmes – which would serve to decrease the number of refugees requiring relief.[6]  These were resisted both by the refugees (who thought they would be returning to their homes within a limited period of time), and by host states, who saw the programmes as forcing on them a situation of permanent resettlement.[7]  In the face of open and latent protest from both, and with the realization that political realities would preclude both resettlement and repatriation,[8] UNRWA reinvented itself as a caretaker agency, reformulating its policies to reflect the relief and works potions of its title.  UNRWA’s current services fall into six broad programmes: health, education, relief and social services, micro-credit financing, infrastructure and camp improvement, and emergency aid.  UNRWA is the primary source of each of these for over 4.7 million refugees it now serves.  It’s continued humanitarian operations are absolutely vital and irreplaceable, and its schools and programs represent much of the potential for lifting Palestinians out of relief assistance and towards self-determination.

How is UNRWA funded and what are Canada’s connections?

Since UNRWA was originally conceptualized as a temporary agency, its funding exists entirely outside of the UN budgetary structure.  It has a planning cycle of six years, aligned with the six-year mandates given it through UN General Assembly votes, and the funding commitments made by donor countries and bodies.  Like past years, almost all UNRWA’s 2009 funding (98 percent) came from contributions from donor states, including the United States, the European Commission, the UK, Norway and Canada.

UNRWA is currently under-funded. It reached only 86 per cent of its funding target in 2009 for running its core programs. Donations to UNRWA are not keeping pace with increased refugee needs – arising both from rising birth rates and sporadic conflict – and have resulted in a deterioration of UNRWA’s services.  Canada has been a consistent and important donor to UNRWA, the dispensation of which falls under the auspices of the Canadian International Development Agency (CIDA).  In 2009, Canada was UNRWA’s seventh largest state donor, providing $20 million dollars to its emergency fund, a sum representing substantially less than previous years.

Has UNRWA been politicized and is it connected to Hamas?

Between 1948 and 1967, the ‘lost years’ of Palestinian political activity, UNRWA acted as the de facto political representative for Palestinians on the international stage, and as a reminder of their continued plight.[9]  By virtue of the connection between UNRWA, the definition of a Palestinian refugee, Resolution 194, and the prescribed right of return therein, UNRWA and return became inextricably linked.  UNRWA came to be seen as caretaker agency until the time when return would be enacted.  Thus, the notion of a Palestinian refugee has always had at its root a political goal, a conceptually discernable end point that has persisted within Palestinian narratives of dispossession, and despite the political realities precluding its actualization.  There is no denying that the Palestinian refugee crisis and its attendant institutions are irredeemably political in a real sense.  This does not, however, affect UNRWA’s humanitarianism.

Recently, however, some have claimed that UNRWA is politicized in a different, more problematic sense, alleging that it hires and/or helps Hamas militants through its programmes.  This is false.  In addition to proofs provided by UNRWA itself,[10] in May, 2009, the US General Accountability Office reported that UNRWA enforces measures to avoid militarization and maintain an internal politically neutral stance.  While suggesting some enhancements to program oversight, it found that the U.S. faced no dilemma in continuing funding.[11]

In May 2009, Michael Bell, former Ambassador of Canada to Israel, Jordan, Egypt, and the Occupied Palestinian Territories wrote that withdrawing Canadian support for UNRWA would be highly unwise since “…[t]he moderate leadership of the Palestinian Authority […] depends on UNRWA not only to feed, doctor and educate the refugees, but also to provide relative stability in the camps, without which Palestinian society would be prey to further and perhaps irresistible chaos.”  Specifically discussing the agency’s role in Gaza, Bell argued that “The agency is Gaza's lifeline to secular culture. Knowledgeable Israelis prefer that young Gazans go to UNRWA's summer camps, with their emphasis on sports, culture and the arts, rather than Hamas's jihadist equivalent [and] the only regional actors who may favour UNRWA's demise are Islamists, who would be only too happy to see it go because of the secular values it represents and promotes.”[12]  Continued funding to UNRWA is a vital source of the very limited stability in the region, and commensurate with the breadth and depth of traditional Canadian values.

[6] Heacock, Roger. “Seizing the Initiative, Regaining a Voice: The Palestinian al-Aqsa Intifada as a Struggle of the Marginalized”, in Cronin, Stephanie (ed.) Subalterns and Social Protest: History From Below in the Middle East and North Africa, New York: Routledge, (2007)

[11] “Measures to Prevent Inadvertent Payments to Terrorists under Palestinian Aid Programs have been Strengthened, but some Weaknesses Remain,”US General Accounting Office, GAO-09-622, May, 2009, http://www.gao.gov/new.items/d09622.pdf accessed Jan. 23, 2010