CJPME Factsheet 73, published January, 2010: This factsheet addresses a number of destructive myths relating to the United Nations Relief and Works Agency for Palestinians in the Near East (UNRWA). This UN Agency, tasked with alleviating the humanitarian needs of Palestinian refugees and their unique political situation, has been the target of attacks and malicious allegations in recent years.

Factsheet Series No. 073, created: January 2010, Canadians for Justice and Peace in the Middle East
View factsheet in PDF format 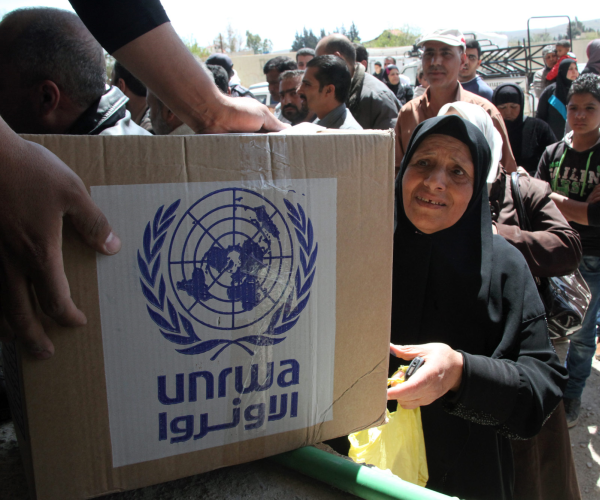 International funding and political support for the United Nations Relief and Works Agency (UNRWA)[i] has come under attack again in recent years.  The current factsheet uses UNRWA and other source material to address head-on many of the malicious allegations being circulated.

Myth: UNRWA perpetuates rather than solves the Palestine refugee situation

FACT: UNRWA was not set up to provide a political solution the Palestinian refugee situation, but rather to address the humanitarian needs of the refugees pending a political settlement.  The UN resolution that created UNRWA focused on the need to prevent “conditions of starvation and distress” among Palestinian refugees and to “further conditions of peace and stability”. [ii]

Decades after its founding, UNRWA continues to exist because the political circumstances facing the Palestinian refugees have not fundamentally changed, and in many respects have worsened.  Contrary to provisions of international law and related UN resolutions, Israel has always refused repatriation of the Palestinian refugees.  The countries hosting the refugees (Jordan, Syria, and Lebanon) refuse naturalization of the refugees, on the grounds that such a move would reflect an acquiescence to Israel’s initial refusal to readmit them.  Finally, while refugees are free to and have accepted resettlement to a third country, such resettlement has neither been offered to, nor accepted by the refugees en masse.

Myth: UNRWA could be replaced by the UN High Commission for Refugees

FACT: UNRWA and UNHCR are both UN agencies created by the international community to serve specific refugee populations. UNRWA deals specifically with Palestine refugees and their unique political situation. UNHCR’s mandate specifically excludes refugees under the care of UNRWA, although Palestinian refugees outside the communities served by UNRWA do fall under the care of UNHCR.  Palestinians are qualitatively indistinct from the rest of the world’s refugees, and it is only their institutional separation that maintains their juridical distinction.  If the operations of UNRWA were to cease, then the 1951 Convention Relating to the Status of Refugees would apply to Palestinian refugees, and they would then fall under UNHCR’s mandate.[iii]   However, as noted above, none of the durable refugee solutions are currently available to Palestinian refugees: repatriation, naturalization in host countries, or resettlement to third countries.  UNHCR, on the other hand, is typically able to resolve refugee situations around the world after a matter of time; with repatriation to their country of origin being the preferred option.  As a result, UNHCR can point to numerous successes: in the former Yugoslavia, in Cyprus, in Namibia, and many other crisis zones around the world.  A refugee problem which lasts decades is the exception, not the norm.

Myth: UNRWA supports an infrastructure of terror in its ranks

FACT: UNRWA maintains strict standards of conduct for its staff and the use of its facilities.  In regards to staff on-duty and off-duty behaviour, UNRWA has extensive “Staff Rules and Regulations” which dictate acceptable activities of its staff, regardless of where or when such activities take place.   When inappropriate political or military activity is deemed to have taken place, UNRWA is known to take swift disciplinary action.  With respect to the hiring of staff, UNRWA has a vetting process used by its personnel departments, and in many several cases allows host governments to review and potentially veto hiring decisions.  In addition, UNRWA shares the names of all staff with host governments (including the Palestinian Authority (PA) and Israel).  The list of UNRWA employees has also been verified against the UN-maintained terror list.  UNRWA maintains standards for professional conduct that are consistent with relevant norms for international civil servants and holds all staff to documented standards of   impartiality. [iv] [v]

Like other UN agencies, UNRWA employees are not vetted for their political views, but are nonetheless expected to function in a principled, professional and impartial manner, providing service “uninfluenced by external political pressures.” [vi]  In this light, in 2004, UNRWA commissioner-general Peter Hansen admitted that there were likely members of Hamas employed by the agency.  As asserted by the agency, UNRWA seeks not to “police the beliefs of its staff” through its policies, but to “police their behaviour.”5

UNRWA also maintains tight control over the use of its facilities, both over internal use, and over use by external entities.  In addition to strict operational controls over how UNRWA facilities can be used, programs in the West Bank and Gaza specifically employ individuals, including foreign nationals, to visit UNRWA installations to ensure they are not being used improperly. [vii] [viii]

FACT: UNRWA does not run refugee camps. UNRWA simply provides services refugees, about a third of whom live in the refugee camps.  Not only has UNRWA never had a mandate to administer the camps, it has no enforcement or security force to do so.  This responsibility has remained with the host countries of the camps, or with Israel which, since 1967 has maintained various forms of control over many camps in the West Bank and Gaza.  (e.g. the seven camps in areas “B” and “C” of the West Bank and in Greater Jerusalem remain under Israeli security control.) [ix]

Myth: Oversight of UNRWA funds is not strong

FACT: UNRWA provides regular reports of both ongoing and emergency operations, which provide a comprehensive view of the Palestinian refugee populations served, and the allocation of funds to the programs.  At the request of the US Congress, in both 2003 and 2009, the US General Accountability Office (GAO) published audits that analyzed the level of compliance between UNRWA and US aid agencies in terms of ensuring that no US aid be allowed to pass into the hands of terrorists or terrorist groups.  Neither audit found evidence of aid passing to terrorists via UNRWA.  While both reports identified ways to improve control on aid monies, the improvements largely depended on US aid agencies giving more detailed instructions to their UNRWA counterparts. [x]

Myth: UNRWA encourages a culture of dependency among Palestinian refugees

FACT: Emergencies notwithstanding, UNRWA typically provides food or direct assistance to only 5.7 percent of the refugee population. [xi]   Many outside studies of UNRWA have been conducted, and they consistently point to well-run programs targeting the most vulnerable of the refugees.  One of the most comprehensive studies, by Norwegians, concluded that, “…UNRWA has a democratizing effect by serving as a safety net for vulnerable groups. Over the long term, this has meant that vulnerable refugee groups everywhere except Lebanon had basic outcomes on par with other, less vulnerable refugees.” [xii]  For its part, UNRWA asserts that, rather than fostering dependency, “UNRWA’s education and healthcare services have enabled the vast majority of the refugee population to become self-sufficient members of the local communities.” [xiii]  UNRWA also cites its large and successful micro-credit program for encouraging independence and self-sufficiency.

[iii] United Nations High Commissioner for Refugees. (2002) “Note on the Applicability of Article 1D of the 1951 Convention relating to the Status of Refugees to Palestinian refugees”, International Journal of Refugee Law, vol.14, no.2/3, p. 451

[vii] Ibid.“Foreign Assistance: Measures to prevent inadvertent payments to Terrorists under Palestinian Aid Programs Have Been Strengthened, but Some Weaknesses Remain,” p. 46