CJPME Factsheet 78, published September, 2012: This factsheet looks at the status and significance of East Jerusalem. After the June 1967 war, Israel announced its intention to annex the 6.5 square kilometers of East Jerusalem, which was to be the capital of a future Palestinian state. To this day, the international community refuses to recognize Israel’s policy of annexation and colonization in East Jerusalem, which are not only illegal under international law, but also detrimental to negotiations.

Factsheet Series No. 079, created: September 2012, Canadians for Justice and Peace in the Middle East
View factsheet in PDF format 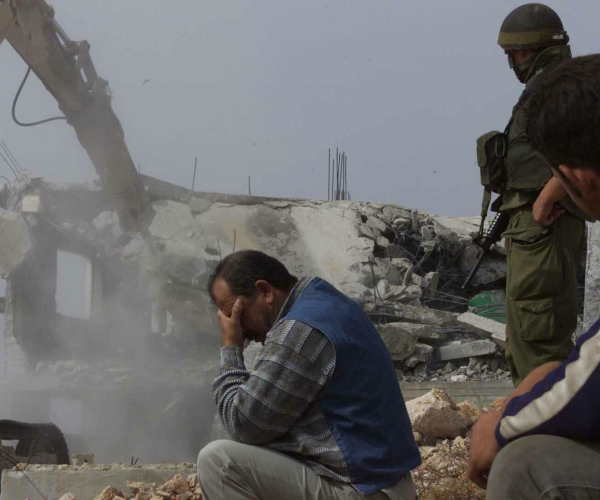 What is the status and significance of East Jerusalem?

The Partition Plan adopted by the UN in 1947 anticipated that Jerusalem would be placed under international jurisdiction. However, this never took place, since Jerusalem was divided in two under the 1949 armistice agreement between Israel and Jordan following the first Israeli-Arab war (1948-1949). Under that agreement, the western part of Jerusalem fell under Israeli control, while the predominately Muslim and Christian eastern part fell under Jordan’s. In the June 1967 war, Israel conquered and militarily occupied East Jerusalem, the West Bank, Gaza, Syria’s Golan Heights and Egypt’s Sinai. Israel then annexed the 6.5 square kilometres of East Jerusalem, as well as 64 square kilometres of adjacent land in the West Bank containing numerous Palestinian villages. The international community, including the US and Canada, has consistently rejected this annexation, considering East Jerusalem Palestinian territory militarily occupied by Israel.

East Jerusalem is the scene of deep tensions. Reaching an agreement on its status is one of the major challenges in Israeli-Palestinian negotiations because of its importance to the Palestinians, who hope to make it the capital of their future state, and for the Israelis, who refuse to share jurisdiction over Jerusalem. Control of the OldCity’s holy sites—a genuine crossroads, religiously, symbolically and historically—is also a sensitive issue. The TempleMount and the Wailing Wall, both sacred for Jews, the Dome of the Rock and Al-Aqsa Mosque, sacred for Muslims, and the Church of the Holy Sepulchre and the site of the Last Supper, revered by Christians, are all there.

Are colonies in East Jerusalem different from those in the West Bank?

No.  Under international law, the Israeli colonies in the occupied territories are all illegal, including those in East Jerusalem. The international community refuses to recognize the policy of annexation and colonization implemented by Israel in East Jerusalem, and has demanded, since 1967, that Israel withdraw “from the territories occupied during the recent conflict” [i] through UN Security Council Resolution 242 (1967). Notwithstanding that resolution, Israel adopted the Basic Law of 1980 declaring that Jerusalem “whole and unified” is the Israeli capital.[ii] This clause was declared “null and void” and “in violation of international law” by UN Security Council Resolution 478 (1980), which considers East Jerusalem as “occupied Palestinian territory” and its Palestinian residents to be protected by international humanitarian law. [iii]

On July 9 2004 the International Court of Justice ruled: “[...] Israeli settlements in the OccupiedPalestinianTerritory, including East Jerusalem, are illegal and an obstacle to peace and to economic and social development [. . .] actions taken by Israel, the occupying Power, to change the status and demographic composition of Occupied East Jerusalem have no legal validity and are null and void.”[iv]

Why is colony growth in East Jerusalem alarming?

Israel’s colonization of East Jerusalem and the extension of such colonies deeper and deeper into the West Bank toward the Jordan River are particularly problematic, because they isolate East Jerusalem from the rest of the West Bank and bisect the West Bank, imperilling the establishment of a viable Palestinian state. The danger of this cannot be exaggerated. In a sharply critical May 14 2012 statement, the EU foreign affairs council warned that the acceleration of settlement construction, evictions and house demolitions in East Jerusalem, settler violence and provocations, and worsening conditions for Palestinians in most of the West Bank "threaten to make a two-state solution impossible."[v]

Has colonization of East Jerusalem intensified in recent years?

Yes. Under Israeli PM Benjamin Netanyahu, Israel continues to periodically announce plans to expand existing colonies in East Jerusalem: e.g. December 2009 call for tenders for new housing units in Pisgat Zeev, Neve Yaakov and Har Homa;  March 2010 approval of another 1600 housing units in the colony of Ramat Shlomo; April 2012 call for tenders for 872 units; etc.  Even more shocking, in October, 2011, the Israeli government announced plans for an entirely new colony in East Jerusalem, to be called Givat Hamatos.  Such counter-productive behaviour elicited a strong condemnation from UK Foreign Secretary William Hague, who stated: “Illegal Israeli settlement activity poses the most significant and live threat to the viability of the two state solution … The Israeli government's policy is illegal under international law, counter-productive, destabilising and provocative.” [vi]

How does Israel’s colonization of East Jerusalem affect Palestinians?

Colonization transforms East Jerusalem’s demographic balance: Since its founding in 1948, Israel has sought to reduce the Palestinian presence there in order to consolidate Israeli control.[vii] Since militarily occupying East Jerusalem in 1967, Israel has transferred almost 200,000 Jewish Israelis to East Jerusalem, expropriating a third of the land in that sector to build Jewish-only colonies (a.k.a. “settlements”). Although a second third of East Jerusalem has not been physically colonized (as of 2010), Israeli authorities have announced projects there too.  Palestinians are only allowed to build on 13 percent of East Jerusalem, in areas already densely occupied.[viii]

In his 2008 Report on the Situation of Human Rights in the Palestinian Territories occupied since 1967 for the UN Human Rights Council, South African jurist John Dugard was extremely critical of Israel’s policies of colonizing East Jerusalem. He asserted that the checkpoints and roadblocks restricting Palestinians’ movements, as well as the demolition of Palestinian homes, are part of a strategy of Judaization of Jerusalem and reflect Israeli policies of “colonialism, apartheid and occupation.” [ix]

The number of Israeli colonizers (“settlers”) in East Jerusalem has risen from 8,649 in 1972 to around 198,629 in 2010[x] (in comparison with 285,095 Palestinians[xi]), a 23-fold increase.[xii] Jewish settlers today live in 14 colonies forming a crescent from the north to the south of the city on its eastern side, contrary to stipulations in the Oslo Accords and subsequent peace plans.[xiii]

East Jerusalem Palestinians’ other rights are violated to pressure them to leave: Although a large part of the “Judaization” ofJerusalem was accomplished by the expulsion of Arab residents during the wars of 1948 and 1967, and has been deepened by the ongoing colonization since, other measures have also shaped the demographic shifts. “Settler” violence and abuse by the occupying Israeli forces makes Palestinians’ lives tense and dangerous.Israel makes it very difficult for Palestinians to obtain a building permits inEast Jerusalem.  As a result, Palestinians are compelled to either tolerate overcrowding or build or enlarge their homes without permits, despite the risk of seeing them demolished later by the occupying Israeli forces. In addition, over 100,000 Palestinian residents have lost (or are forced to live with the risk of losing) their right of residence inJerusalem asIsrael confiscates many Palestinians’ residence permits on various pretexts, for example absence to study abroad.

[iv]   International Court of Justice, Legal Consequences of the Construction of a Wall in the Occupied Palestinian Territory, Advisory Opinion of July 9, 2004

[xii] According to a July 26 2012 Guardian article , the pro-government newspaper Israel Hayom reported there were now 300,000 Jews living in settlements across the pre-1967 border in East Jerusalem. If true, that would mean that Israel has transformed East Jerusalem from a predominately Palestinian area into to a majority Jewish area. However, such estimates should be viewed with caution since they may have been exaggerated in order to bolster the claim by “settlers” that the “settlements” are so large as to be irreversible.

[xiii]   Israel and the Palestinian Authority committed themselves to not taking measures that would modify the fundamental parameters of the territories in dispute. Thus, in the Oslo Accords (Declaration of Principles), article IV, “The two sides view the West Bank and the Gaza Strip as a single territorial unit, whose integrity will be preserved during the interim period.” According to the Road Map for Peace, proposed by the Quartet (US, EU, Russia and UN), “Israel withdraws from Palestinian areas occupied since September 28, 2000 [. . . ] Israel also freezes all settlement activity [. . .] The government of Israel takes no actions undermining trust, including deportations; attacks on civilians; confiscation and/or demolition of Palestinian homes and property, as a punitive measure or to facilitate Israeli construction; destruction of Palestinian institutions and infrastructure [. . .]”

[xiv] B'tselem. "Statistics on demolition of houses built without permits in East Jerusalem." June 6, 2012. (n.b. 19 of the homes demolished between 2010 and 2012 were demolished by their owners, on receiving demolition orders, in order to avoid being charged by the Israeli authorities for demolition costs and fines.)