CJPME Factsheet 82, published June, 2010: This factsheet provides an overview of Indigo Books and Music Inc., Canada’s largest retail bookstore and the third largest in North America. Husband and wife Gerry Schwartz and Heather Reisman, who control 68% of the assets of the company, established the HESEG Foundation for Lone Soldiers in 2005 to encourage foreign soldiers to join the Israeli army and continue their studies in Israel. By supporting and rewarding the « Lone Soldiers », Reisman and Schwartz by means of Indigo Books and Music Inc., indirectly support Israel military efforts in the occupation of the Palestinian territories.

Factsheet Series No. 082, created: June 2010, Canadians for Justice and Peace in the Middle East
View factsheet in PDF format 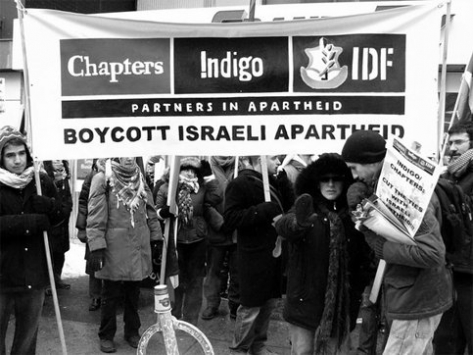 What is Indigo Books and Music Inc.?

Founded in 1996, Indigo Books and Music Inc., a Canadian Company, became the largest Canadian book retail chain at the time of its merger with Chapters Inc. in August 2010. With over 250 stores in ten provinces and one territory, Indigo is the third largest book retailer in North America. This monopolistic company sells under the banners Chapters, The World’s Biggest Bookstore, Coles, SmithBooks, Indigospirit, The Book Company, Pistachio, and chapters.indigo.ca. Heather Reisman and Gerry Schwartz are a couple: she is founder and CEO of the company, while he is president of Onex Inc., and member of

What is the HESEG Foundation for Lone Soldiers?

Heather Reisman and Gerry Schwartz established the HESEG Foundation for Lone Soldiers in 2005 to encourage foreign soldiers to join the Israeli army and continue their studies in Israel. By issuing scholarships on behalf of the HESEG Foundation for Lone Soldiers, Reisman and Schwartz hope to demonstrate their gratitude and support for the hundreds of « Lone Soldiers » who left their country to join the Israeli military forces. Each year, the HESEG foundation rewards hundreds of “Lone Soldiers” with more than $3 million worth of scholarships for further academic studies in Israel.[2]

By supporting and rewarding the « Lone Soldiers », Reisman and Schwartz by means of Indigo Books and Music Inc., indirectly support Israel military efforts in the occupation of the Palestinian territories. While accepting the value of educational scholarships, the HESEG Foundation is criticized for the choice of entry criteria of these scholarships. To be eligible, the immigrant to Israel must join the Israeli occupation forces, and complete his term of active service.

Unlike Israeli citizens, the « Lone Soldiers » are under no civil obligation to participate in the Israeli army. On the contrary, they volunteer to participate in Israel’s occupation forces. The HESEG Foundation, promising financial assistance, thus encourages individuals to take part in the occupation.  Like Israeli soldiers, « Lone Soldiers » may participate in military activities at various checkpoints that restrict Palestinian movement while strengthening the occupation of Palestinian lands. The HESEG Foundation thus encourages individuals to participate in activities which are illegal under the Fourth Geneva Convention, the Hague Convention and several other related instruments of international law (e.g. The Convention against Torture and Other Cruel, Inhuman or Degrading Treatment or Punishment, etc.[3])

Moreover, the HESEG Board of Directors makes the selection of scholarship recipients. This Board is composed primarily of members or retirees of the Israeli army, some of which are criticized for major violations of international law under their command. Notably Doron Almog, who escaped arrest in London in 2005 on charges of war crimes.[4]   Reisman and Schwartz are therefore directly linked to the Israeli army, and work jointly with it. The Israeli army has shown its gratitude to the foundation by providing the couple with the firearm of a "Lone Soldier" American killed in action during a ceremony praising the importance of foreign troops and the financial support provided by Reisman and Schwartz.[5]

From a legal point of view, the boycott strategy focuses on the Israeli army since it is the subject of such criticism from international institutions following its noncompliance with international human rights and humanitarian law. In effect, the Israeli occupation of Palestinian territories is one of the longest occupations in modern history, and is highly criticized because of its ongoing legal violations by international legal bodies.  Moreover, according to recommendation C of the UN Norms on the responsibilities of transnational corporations and other business enterprises with regard to human rights, any involvement by business enterprises in war crimes, crimes against humanity, acts of torture or any violations of international humanitarian law and international are illegal.[6]

According to this principle, the HESEG Foundation must a) not provide any indirect support for the Israeli army; and b) not promote the participation of its beneficiaries in legal violations or war crimes. The HESEG Foundation should neither encourage nor finance the Israeli army and its soldiers, since they indeed pursue the above acts that violate international law. Under the legal norms, the foundation HESEG should ensure soldiers recipient of scholarships do not engage in acts deemed illegal by international law. Nevertheless, a close follow-up would be difficult since a) the Israeli army would not allow it and b) this monitoring would require ongoing and insurmountable overhead for the Foundation.

It is also important to note that in July 2005, over 170 Palestinian organizations have called for a boycott of Israeli products in order to press for recognition of the Palestinians’ right of self-determination. While aware of the potential economic impact on Palestinians and Israelis, the boycott seeks to pressure all bodies directly or indirectly supporting the Israeli economy, and particularly the Israeli occupation of Palestinian territories.

When will the boycott strategy end?

The boycott strategy will end if one or more of these following things take place:

With the boycott, where else can I buy books apart from Indigo’s?

What other ways to put pressure on Indigos?

Individual action is at the heart of CJPME’s boycott campaign. The following are tools and mechanisms established by CJPME through which all concerned citizens can pressure Reisman and Schwartz to withdraw their funding to the HESEG Foundation for Lone Soldiers.

[3] To know more about the Israeli occupation army’s violations of the international law, see CJPME Factsheet, The Geneva Conventions and Israeli

Activities in the Occupied Territories, March 2004.

[6] United Nations: Economic and Social Council. Norms on the responsibilities of transnational corporations and other business enterprises with regard to human rights. E/CN.4/Sub.2/2003/12/Rev.2.