CJPME Factsheet 86, published June, 2010: Cultural boycotts are undertaken to express repugnance for the conduct of a country or its government, and are often accompany economic boycotts, and may or may not extend to the academic sphere. This factsheet looks at the call for the cultural boycott of Israel in particular; the prominent artists or academics boycotting this country, and how successful cultural boycotts against other countries have been in the past.

The Cultural boycott of Israel

Factsheet Series No. 086, created: June 2010, Canadians for Justice and Peace in the Middle East
View factsheet in PDF format 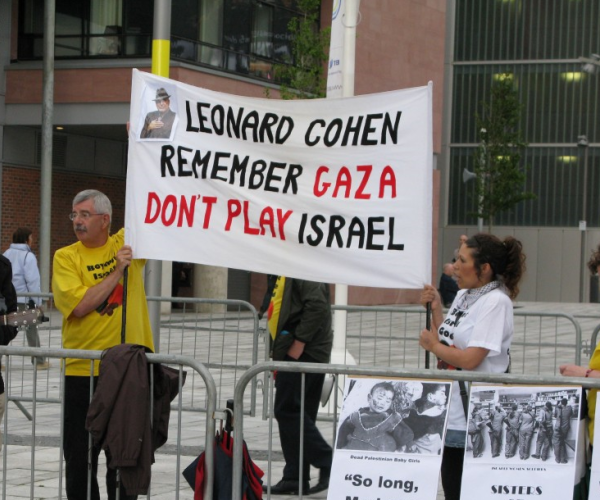 What is a cultural boycott?

Cultural boycotts are undertaken to express repugnance for the conduct of a country or its government. They often accompany economic boycotts, and may or may not extend to the academic sphere.[i]

Yes. In January 2009, following Israel’s assault on Gaza, 300 Canadian academics signed an open letter to Steven Harper condemning Israel’s War on Gaza and calling for sanctions against Israel.[ii] The Ontario Division of the Canadian Union of Public Employees endorsed a full boycott of Israel. The US Campaign for the Academic and Cultural Boycott of Israel, also launched in January 2009, currently has 471 individual endorsers at American universities, as well as 131 endorsements from cultural workers.

A number of performing artists have cancelled their 2010 concerts in Israel: Gil Scott Heron, Santana, The Pixies, Gorillaz Sound System, the Klaxons, and most prominently, Elvis Costello. Elvis Costello announced in mid-May 2010 that he was cancelling two summer performances there, saying his decision was a “matter of instinct and conscience.”[iii] The Gorillaz Sound System and Klaxons announced on June 4, in the wake of Israel’s lethal raid on an aid flotilla, that they were cancelling their performances in Israel that week.[iv] The Pixies’ cancellation of their appearance was announced two days later. [v]

Despite the calls for cultural and academic boycotts, many notable critics of Israel, including Noam Chomsky and Naomi Klein, have continued visiting there. However, Chomsky refrained from scheduling his customary lectures at Israeli universities during a May 2010 visit to speak in the West Bank.[vi] Klein visited Israel, the West Bank and Gaza in the summer of 2009 when the Hebrew edition of her book Shock Doctrine was launched, but is donating her royalties from it to her local publisher, Andalus, which specializes in translating Arabic texts into Hebrew. She refused to cooperate with Israeli state institutions during her tour, has expressed support for a boycott and is working closely with Palestine’s Boycott National Committee (BNC). [vii]

On March 18, 2010, the Senate of the Associated Students of the University of California (Berkley) resolved to divest ASUC's assets from two American companies, General Electric and United Technologies, that are "materially and militarily supporting the Israeli government's occupation of the Palestinian territories,” and to advocate that the University, with about $135 million invested in companies that profit from Israel’s illegal actions in the Occupied Territories, follow suit. Although the ASUC Senate president vetoed the motion, the resolution may presage ASUC support for an academic boycott. Similar moves have occurred at Rutgers and the University of Arizona.

Have full-fledged cultural and academic boycotts been initiated?

As of June 2010, none of the largest organizations of performing artists in the West —British Actors’ Equity, or the British Musicians’ Union, Canada’s Alliance of Canadian Cinema, Television and Radio Artists (ACTRA), or the US’s Screen Actors’ Guild (SAG)—have endorsed a boycott of Israel. In late January 2006, the British Musicians’ Union debated and rejected a motion to ban all Israeli musicians from Britain and visits of their own members to Israel. The Musicians’ Union rejected the argument that Israel practices apartheid.[viii] There is currently nothing at their website referring to a boycott of Israel.

Likewise, few of the most representative organizations representing academics have so far voted in favour of an academic boycott. In January 2010 Education International (EI)—the global union federation representing more than 30 million teachers and education workers in 172 countries and territories—and the Canadian Association of University Teachers (CAUT), which represents 67,000 academics in Canada, released a joint report drawing attention to violations of basic academic freedoms and rights in Israel and the occupied Palestinian territories.[ix] The report defended individual Palestinian and Israeli academics’ right to call for a boycott without being subjected to retaliation by their academic institutions or governments, but EI and CAUT did not urge educational institutions, academics or their own component member organizations to engage in an academic boycott of Israel. However, CAUT did issue a statement in January 2009 sharply criticizing Israel’s assault on Gaza, calling it “disproportionate to the threat it faces.” EI also issued a statement in June 2010 condemning Israel’s flotilla raid.[x]

Have there been cultural boycotts against countries other than Israel?

A cultural boycott of South Africa began in 1961 when the British Musicians’ Union adopted a policy that its members would not perform in South Africa as long as apartheid was in effect. The boycott slowly gained support in both North America and Europe, although the US lagged well behind the UK in its willingness to forego sales of its own products in South Africa. In 1981, unions representing 240,000 actors across the US took a unanimous decision that their members should not perform in South Africa. South Africa was also excluded from the Olympics until 1992, as well as from international rugby and cricket tournaments.  South African apartheid was dismantled only 30 years after the application of the first boycotts.

Chilean grapes and wine were boycotted during the Pinochet dictatorship, but there was no cultural boycott; instead, solidarity groups worked hard to break the isolation of progressive Chilean academics and artists.[xi]