CJPME Factsheet 89, published July, 2010: This factsheet looks at the water situation in Israel and Palestine. Today, Israeli citizens have unlimited running water year-round while hundreds of thousands of Palestinians suffer from water shortages through the hottest months of summer. Given these shortages drastically affect Palestinians’ health and economic well-being, this factsheet looks at Israeli water policies and practices vis-à-vis Palestinians, the difference in Israeli-Palestinian water consumption, the impact of Israel’s assault on Gaza (2008-2009) had in water infrastructure and sanitation services, and whether water Israeli practices and policies violate international law.

Factsheet Series No. 089, created: July 2010, Canadians for Justice and Peace in the Middle East
View factsheet in PDF format 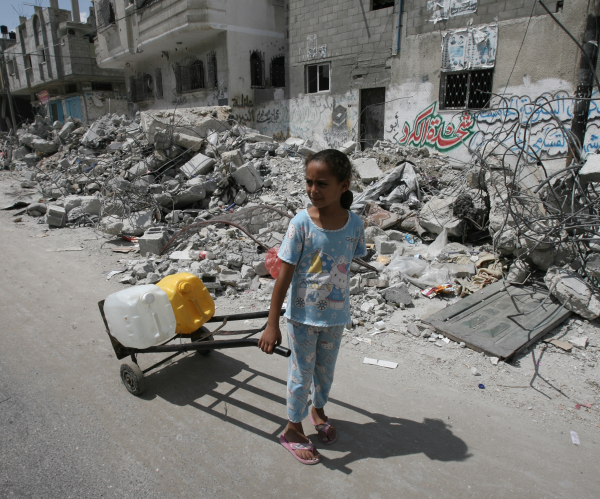 What is the water situation in Israel and Palestine?

Israeli citizens have unlimited running water year-round while hundreds of thousands of Palestinians suffer from water shortages through the hottest months of summer. The shortages drastically affect Palestinians’ health and economic well-being.[i]

Israel pumps about 80% of the Mountain aquifer’s “estimated potential” and over-extracts by more than 50%.[iii] Over-extraction combined with reduced recharge threatens the aquifer’s sustainability and has caused a decline in water availability to Palestinians—who extract 20% of the estimated potential—through shallower wells. Palestinian extractions have declined over the last ten years due to dropping water tables and Israeli restrictions enforced on drilling, deepening and rehabilitating wells. Withdrawals per capita for Palestinians in the West Bank are around a quarter of those available to Israelis. According to the World Bank, by regional standards[iv] the Palestinians have the lowest access to fresh water resources Through its deep wells, Mekorot, Israel’s National Water Company, extracts water from the Mountain aquifer and sells it back to the Palestinians, increasing Palestinian dependency on Israeli water supplies.

The second main water source, the Jordan River, is shared both geographically and according to international law. Nevertheless, the Palestinians do not receive any water from it, while Israel uses it to meet approximately one-third of its water needs.[v]

How do Israeli water policies and practices affect Palestinians?

While demand for water by Palestinians in the West Bank and Gaza Strip has been steadily increasing over the last decades, the development needed to meet that demand has not taken place due to Israel’s tight restrictions over water consumption in the Occupied Territories. The restrictions and prohibitions instituted by Israel did not exist when the West Bank was under Jordanian control and when Gaza was under Egyptian control prior to 1967, and are a principal reason for water shortages.[vi]

According to B’Tselem, since Israel militarily occupied the Palestinian territories in 1967, it has exploited the water resources in these territories to its advantage in two main ways: the unequal division of shared groundwater in the West Bank, and the utilization of new water sources Israel did not have access to before 1967 (Eastern Aquifer in the West Bank and the Gaza Aquifer). After the Israeli occupation began in 1967, control over the Palestinian water sector was transferred to Israeli bodies that imposed drastic restrictions on the drilling of new wells. Under military orders, drilling now required a permit obtainable only through a lengthy and complicated bureaucratic process. The vast majority of applications made for permission to drill new wells are denied.

At present, Palestinians in the West Bank must gain approval from the Joint Water Committee (JWC) to use their water resources. According to the Emergency Water, Sanitation and Hygiene group (EWASH), a coalition of almost 30 organisations working in the water and sanitation sector in the OccupiedTerritories, “since 1967, not one permit has been granted to Palestinians to drill a new well in the Western Aquifer, the most productive aquifer basin. Since Oslo, not one new permit for agricultural wells was issued. 120 old Palestinian agricultural wells cannot be operated, lacking JWC approval for repair and maintenance. If any water project is located in Area C [full Israeli control], an official ‘permit’ has to be obtained from the Israeli Civil Administration (ICA) in Bet El.”[vii]

The water crisis in the OccupiedTerritories results from these restrictions as well as Israel’s minimal investment in water infrastructure. In 2008, 8.6 percent of Palestinians in the West Bank lived in communities not connected to running water, while another 190,000 (about 8 percent) lived in communities supplied with limited water. One-third of the water supplied to the West Bank is lost due to leakage, defective maintenance and old infrastructure.[viii]

What is the difference in Israeli-Palestinian water consumption?

Per capita water consumption for Israelis is close to three and a half times that of Palestinians.  On average, in the West Bank, daily per capita consumption (domestic, urban and industrial use) is around 73 litres. In areas of the northern West Bank, it is even lower (e.g. 44 litres in Jenin; 37 litres in Tubas.)  The World Health Organization recommends 100 litres of water per capita per day as a minimum, a figure which factors in domestic use and consumption from public institutions such as hospitals and schools. Daily Palestinian consumption is one-third less than the recommended quantity.[ix]  By comparison, daily per capita water consumption in Israeli towns is 242 litres.

What has been the impact of the war and blockade on water in Gaza?

The Israeli blockade imposed on Gaza since 2007 combined with Israel’s assault on Gaza in 2008-2009 has devastated Gaza’s water and sanitation services. Fuel and electricity shortages in Gaza before the war were already severely impacting water services, while the construction materials needed to repair the damages after the assault have, up until recently, not been allowed in. [x] As a result, 50 to 80 million litres of partially treated sewage are released directly into the Mediterranean each day, and poor water quality has caused serious health problems in vulnerable groups. Due to the blockade, sewage treatment projects have been cancelled or postponed, causing the aquifer water quality to deteriorate: only 5-10% of the aquifer water now meets drinking quality standards.[xi] Due to the intermittent supply of water, domestic consumption is so low in parts of Gaza that people are forced to neglect their hygiene, further escalating health risks.

Yes. Under international law and as the occupying power, Israel holds the primary responsibility for the welfare of the Palestinians. Yet discriminatory Israeli policies and practices routinely deny Palestinians their right to water and sanitation. The right to water and sanitation, and the right for a people to make use of their natural wealth are human rights under international law that Israel has ratified, e.g. The International Covenant on Economic, Social and Cultural Rights (1966) Articles 1, 11, 25; The Convention on the Elimination of All Forms of Discrimination against Women (1979) Article 14-2(h); and The Convention on the Rights of the Child (1989) Article 24-2(c).  Article 27 of the Fourth Geneva Convention prohibits an occupying state from discriminating between residents of occupied territory, yet Israeli colonists in the West Bank are allocated much more water than Palestinians.

Finally, Article 43 of The Hague Regulations (1907) prohibits the occupying power from changing laws that were in place prior to the occupation.  Nevertheless, Israel`s military orders regarding water resources and supply significantly altered the legal and institutional structure of the Palestinian water sector. Article 55 limits the right of the occupying power to utilize the water sources of occupied territory—it must be for military needs and must not exceed past use. Colonist water consumption in the OPT violates Article 55.

[vi] “The shared water sources and the control over them.” B’Tselem, http://www.btselem.org/english/water/shared_sources.asp, Aug. 4, 2010

[viii] Ibid., “The shared water sources and the control over them.”

[ix] “The gap in water consumption between Palestinians and Israelis.” B’Tselem., http://www.btselem.org/english/water/consumption_gap.asp

[x] Note: The restrictions imposed by Israel through its blockade of Gaza are variable.  At the writing of this factsheet, in the immediate aftermath of the May 31, 2010 Israeli attack on the Gaza aid flotilla, Israeli restrictions on infrastructure repair and replacement equipment have been somewhat relaxed.  Nevertheless, for three years, from 2007-2010, there was a moratorium on the entry of such equipment into the Gaza.