CJPME Factsheet 110, published February, 2011: This factsheet looks at the anti-government protests taking place in Yemen, some of the most significant in the country’s history. US-allied President Ali Abdullah Saleh has been in power for three decades and Yemenis’ patience for reforms is running out. Protests stem from economic stagnation and rising inequality—it is the poorest country in the Arab world—as well as the lack of democracy. The Tunisian and Egyptian uprisings have inspired Yemenis and have generated a sense among them that deep change is now within their grasp.

Factsheet Series No. 110, created: February 2011, Canadians for Justice and Peace in the Middle East
View factsheet in PDF format 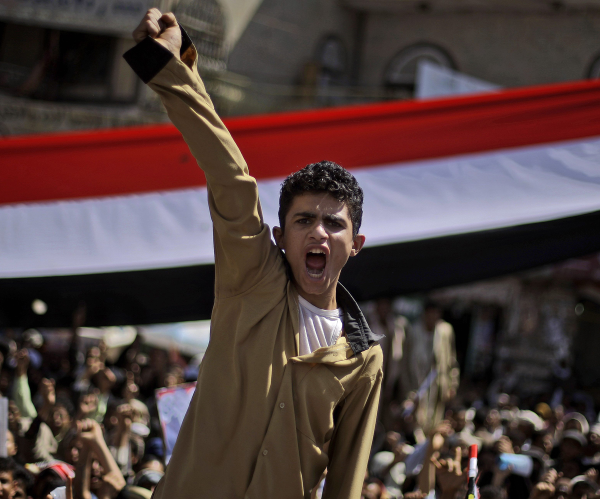 How significant are the January-February 2011 protests in Yemen?

The anti-government protests in Yemen in early 2011 have been some of the biggest anti-government protests in Yemen in its history. They have already obliged US-allied President Ali Abdullah Saleh to announce on Feb. 2, 2011 that he will not seek re-election when his term expires in 2013—a move that would end his three-decade rule.[1]  However, even after this promise by Saleh, protesters continued to push for him to leave office immediately. The opposition appears to be testing the waters in the run up to Parliamentary elections in April, 2011. Yemen’s opposition parties are much more involved in the protests than Egypt’s have been, and the protests are more organized and less spontaneous. Protests have been taking place on a nearly daily basis in Sana’a, Yemen’s capital, since mid-January.

According to UK newspaper The Guardian, the turning point in the unrest occurred when socialists, Islamists and youth activists shut down Sana’a on Jan. 27, demanding the resignation of Saleh, in power since 1978. Around 15,000 students and activists wearing pink ties on their heads—in honour of Tunisia’s “Jasmine Revolution” and to signal that they did not want violence—formed a "human wall" at Sana'a University, a hub for the protests. Another group of 3,000 anti-Saleh protesters gathered elsewhere in the capital outside the home of Abdullah al-Ahmar, former leader of the Islamist party Islah. "We are here to say enough, enough, the president should go," Mohammed al-Sabri, a leading opposition figure, told the crowds. [2]

In addition to the protests in Sana’a, thousands have taken to the streets in al-Hudaydah province along the Red Sea coast, as well as in the southern provinces of Dali and Shabwa.

Why are Yemenis protesting?

Poverty: One banner at the Jan. 27 protests read simply, "Look at the gap between the rich and poor."[3] Yemen, the poorest country in the Arab world, is struggling with 35 percent unemployment. Sana'a is expected to run out of affordable water supplies by 2017.  The World Bank predicts that Yemen will cease earning income from its oil in 2017; oil currently provides three-quarters of state revenues. Nearly half of Yemen's population of 23 million lives below the poverty line of $2 a day, and does not have access to proper sanitation. One-third suffer from chronic hunger, and 46 percent of children under five are underweight. Less than a tenth of the roads are paved. Government services are riddled with corruption and the government itself has little control outside Sana’a. Dwindling financial resources have reduced Saleh's ability both to respond to social problems like poverty, and to dispense patronage to maintain his grip on the country.[4] [5] [6] [7] [8]

Lack of democracy: Saleh has been in power since 1978, and was re-elected in Sept. 2006 for a seven-year term.[9] The current protests were in large measure sparked by a draft amendment to the constitution that would—if passed—have allowed Saleh to run for office for two more terms of 10 years. Saleh is also accused of grooming his son Ahmed—head of the elite Presidential Guard[10]—to succeed him. Although Saleh has denied these accusations,[11] his opposition critics expressed doubts about Saleh's pledge. Saleh made a similar promise in 2006, but then failed to fulfil it, ran again and was re-elected.[12]

According to Human Rights Watch, Yemen’s human rights situation deteriorated throughout 2010, with hundreds of arrests and the use of lethal force against demonstrators. Yemen intensified counterterrorism efforts against suspected members of al Qaeda in the Arabian Peninsula (AQAP), but some attacks killed and injured civilians. The US increased military assistance and cooperation with Yemen's government following the failed AQAP attempt in December 2009 to blow up a Detroit-bound airliner.[13]

The examples of the Tunisian and Egyptian uprisings: Protesters have stated that they draw their inspiration from the “Jasmine Revolution”—protests that forced Tunisia’s long-time president Ben Ali to flee the country. Egypt’s parallel and highly successful protests – and the grudging concessions by Egyptian President Hosni Mubarak – have generated a sense among Yemenis that deep change is now within their grasp.

How has the Yemeni government responded to the protests?

Saleh has responded to the opposition with a combination of carrots and sticks. In the way of sticks, Jan. 23 he ordered a heavy deployment of anti-riot police and soldiers to several key areas in the capital and its surroundings to prevent any riots. Police fired tear gas at the demonstrators. Around 30 protesters were detained, according to a security official who spoke on to Al Jazeera on condition of anonymity.[14] Outside Sana'a University that day, riot police armed with water-cannons used batons and shields to disperse protesters. A demonstrator was shot dead in the port of Adan.[15] A cameraman working for the satellite station al-Arabiya had his camera confiscated and was briefly detained for filming the skirmishes. Another cameraman working for al-Jazeera was beaten by police.[16] However, on Jan. 27 Yemeni interior minister Motahar Rashad al-Masri told Al Jazeera that Yemeni authorities would not curb peaceful demonstrations, regardless of their size.[17] Saleh's ruling GPC staged counter marches across the capital on Jan. 27, attended by hundreds of government supporters.

In terms of carrots, the major one is his Feb. 2 announcement that he would not run again when his term ends in 2013. But even prior to that, he had ordered income taxes slashed in half, instructed his government to control prices, raised salaries for the army and civil servants and on Jan. 30 announced plans to expand Yemen's limited social security system.[18] He also offered to create 44 new seats in Parliament, especially for women.[19]

How have Canada and Western governments responded to the protests?

Canada does not have an embassy in Yemen; its diplomatic relations with Yemen are handled by its embassy in Saudi Arabia. Although AFP reported Jan. 27 that Foreign Affairs Minister Lawrence Cannon had urged the Yemeni government to “ensure full freedom of expression for Yemenis,”[20] the Canadian government has been relatively quiet on the situation.

Canadian and American relations with Yemen have in recent years been strongly coloured by anxiety about Al Qaida’s presence there. As well, the US is concerned about the smuggling of Gaza-bound arms through Yemen.[21] On Jan. 11, 2011 Hillary Clinton made the first visit of a US Secretary of State to the country in 20 years. She said that Al Qaeda militants operating there are an “urgent concern,” but that the US would rebalance its Yemeni aid package in favour of social and economic reform. Over the last couple of years, US military and civilian aid to Yemen has increased almost 100 percent to around $300 million.  Nonetheless, experts say that this is not enough to address Yemen's deep social and political problems.[22]

[21] The Guardian. “US embassy cables: US requests access to Yemen airspace to monitor arms smugglers,” Dec. 6, 2010